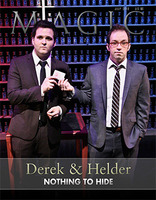 Today, when you order "MAGIC Magazine: July 2013 ISSUE", you'll instantly be emailed a Penguin Magic gift certificate. You can spend it on anything you like at Penguin, just like cash. Just complete your order as normal, and within seconds you'll get an email with your gift certificate.

Derek & Helder: Nothing to Hide By Mike Caveney

Teaming up to present a duo show at the Magic Castle, Derek DelGaudio and Helder Guimarães became the talk of the magic world. A highly successful run at the Geffen Theater in Los Angeles brought them public acclaim. Mike Caveney talked to the pair about how they got where they are and where they're going next.

King of Conjurors By David Meyer

Ed Reno was a classically styled magician who toured the small towns of America throughout the late 19th and early 20th centuries, generally playing under canvas on the Chautauqua circuit. He may have had some eccentric habits, but other magicians were impressed with how good Reno really was.

This excerpt from Diamond Jim Tyler's latest book features tricks and gags that will fit in your pocket, using common items that are not normally thought of as magic props. Here's an impromptu prediction with a cell phone, a Post-it note puzzler, and a crafty use for fortune cookies.

The Gift By Jamie D. Grant

It was the worst night of Dan Harlan's life. A crime he doesn't remember, a very public embarrassment, and a life-altering aftermath. With that all behind him now, Dan Harlan reflects on what happened and what a gift it may have been.


Talk About Tricks By Joshua Jay
The Happy Magician

This month, we begin with John Guastaferro and a beautiful moment in which a pack of cards vanishes from around two selections. Chris Westfall's Off By A Lot is a charming routine in which messages on the back of a selected card keep changing as the card itself changes, until you finally arrive at the selected card. Tattle Too is Donny Orbit's handling of a little-known Google Easter egg, and Yu-Hsuan Lin explores a fun effect with just five cards.

Les Amis By Gaëtan Bloom & Kevin James
On the Rocks

In this effect, you have two clear plastic cups The first one is full of ice cubes, the second one full of scotch. You pour the liquid over the ice cubes, then pour the combination back and forth a few times, showing the two cups full of the mixture of ice and beverage. You pour everything back into one cup a final time, leaving the other cup empty. Your two hands approach each other and, in a split second, the hands are separated — and one cup is now full of scotch, the other full of ice cubes, just like at the beginning!

This month's helping of mental mystery is a ten-card poker deal with a few important differences. For one thing, there are no playing cards involved. And there aren't ten of them. And it has nothing to do with the rules of poker! It all adds up to a short and simple exercise in verbal mind control that can be presented either close-up or onstage.

The Mismade Flag is an old standard, and it's an especially great trick for younger kids. It can be used in any show, but it works particularly well for Presidents Day, Fourth of July, or school and library shows that are tied in to a George Washington or Betsy Ross book.

50 Years at the Castle By Milt Larsen
Gags, Gimmicks, Gadgets, and Goofs — Fifty Years of Fun!

From the day we opened the Magic Castle in 1963, we felt it should be a really fun place to visit. When the owner of the property, Thomas Glover, was a little unsure of leasing his grand old Hollywood mansion to a comedy writer/magician, he asked me to write up something that would explain what I had in mind. I wrote him a little scenario that described arriving at the grand entrance to a millionaire magician's mansion at the turn of the century. Guests would enter a room with no exit and say a secret word that would activate a fireplace mantel that would swing open like the one I remembered from an old Abbott & Costello movie.…

Our Magic Stories By Gerald A. Schiller
Harry, Harry, and Me

I don't remember most of the show Harry Blackstone Jr. did that night, except for one trick. It was the Kellar Rope Tie and it involved some pickpocketing as well, all of which I discovered when I volunteered to be his assistant. He deftly got my watch and my wallet, and once again I enjoyed being the victim of a master magician's skill and humor.
After the show, I stopped to thank him as he packed his apparatus. I couldn't resist saying, "You know, the last person who picked my pocket was your father — back in Philadelphia at the Walnut Street Theater, many years ago."

Viewpoint By Chris Philpott
The Joy of Failure

What do you do when a trick doesn't work? There's a scary thought. That's the magician's nightmare, isn't it? But maybe it shouldn't be. Maybe — just maybe — we should fail more.

For What It's Worth By Mark Kornhauser
First Trick

Every magician remembers his or her earliest inspirations. There was some moment of wonder and confusion and the burning desire to know how it was done. We got "the bug." We wanted to be the magician. Who wouldn't trade a little innocence for an opportunity to be master of the universe?

Paynefully Obvious By Payne
The Wisdom to Know the Difference

The other day, I heard a story about a magician whose performance was repeatedly disrupted by a boisterous audience member who kept shouting out how the tricks were done. Unlike the hecklers of old who would spout off best guesses such as "It went up your sleeve" or "He's using a magnet," this fellow's revelations were all spot on. He really knew the magician's secrets, not because he'd stumbled across them somewhere, but because he was using his iPhone, in real time, to find explanations on the Internet.
Questions about this product