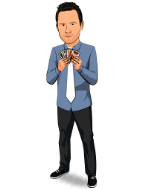 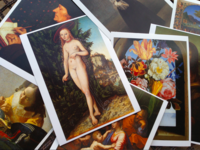 Today, when you order "Self Guided Tour by Rick Lax", you'll instantly be emailed a Penguin Magic gift certificate. You can spend it on anything you like at Penguin, just like cash. Just complete your order as normal, and within seconds you'll get an email with your gift certificate.

A spectator holds a mixed-up stack of 8 postcards. She names one at random and then deals to it as if by fate.

You can perform Self-Guided Tour with postcards, tarot cards, photographs, or playing cards. Whatever fits your personality and style. I use postcards from the Louvre, and my presentation goes like this:

“I believe that if you were to go to a museum and walk around, from room to room, randomly, you’d end up at the painting you’re SUPPOSED to see. As if by fate. And I’m going to prove it to you right now.”

I show the eight paintings one at a time, and then I mix them up. I hand the stack to the spectator and ask her this:

“When I showed you those eight paintings, did you click with any of them?”

The spectator names one and I ask her to remove seven of the postcards using the down/under shuffle described at the start of the trick. She does this…and she ends up with one postcard (and one postcard alone). She turns it over. It’s the painting she wanted. As if by fate.

Self-Guided Tour is a piece of strong magic. It’s not easy, but it’s worth the work. Because once you’ve got the trick mastered, you won’t just fool people, you’ll connect with them.

TIP: Self-Guided Tour uses sleight-of-hand and memory work. As I perform it, it’s not an easy trick. Though, easier versions are taught on the download.

Requires some memorisation but effect is awesome Report this review
Verified buyer Pro Privacy ON (login to see reviewer names) on June 3rd, 2014
This trick requires some memorisation, but with some focus, can be done. This trick does not need to be done with post cards as Mr Lax offers alternatives such as Tarot Cards or playing cards. I happen to have a board game with pictures on it called Dix-it which I use. Have also used the effect with the cards from Dan & Daves Ultimate Deck as well. Awesome potential with other props.
4 of 4 magicians found this helpful.
Did this review help you? Do you want to respond to this review?

One of my new favorites. Report this review
Verified buyer Pro Privacy ON (login to see reviewer names) on July 17th, 2013
Excellent effect. Worth the price. Very versatile: can be performed with anything from postcards to trading cards to ANYTHING, cd's, etc.

If you like the way it appears in the demo, you'll enjoy performing this effect. It requires a bit of work to prepare yourself for the effect, but it's completely worth it. The download is very thorough. Rick is very clear. Don't hesitate. He's churning out killer material for us.
4 of 4 magicians found this helpful.
Did this review help you? Do you want to respond to this review?

Come on !! Report this review
Verified buyer Pro Privacy ON (login to see reviewer names) on September 30th, 2015
Sometimes I really suprised about how differnt magicains think about different Products and Gimmicks.
I dont think this is a five star at all.
The effort you have to put it for this trick and the reactions after the show ??
I mean come on guys its ok but five stars ?
For me not practicle just think locical guys when u buy new staff..
How much time you have to put in to learn this trick and is it afterwards worth it?
What I mean will u get a wow or is it a killer effect?
Well this trick is definately not a killer and for me it was a waste of time sorry.
Everything must be equal like in balance here you really need some time but in the end pufffff :-D.
5 of 8 magicians found this helpful.
Did this review help you? Do you want to respond to this review?

My Best Report this review
Verified buyer Pro Privacy ON (login to see reviewer names) on December 22nd, 2014
Thanks Rick Lax... special method .. its very powerfull magic but very important magic story...this is my best mentalism trick... thank you
2 of 2 magicians found this helpful.
Did this review help you? Do you want to respond to this review?

my reviw Report this review
Verified buyer Pro Privacy ON (login to see reviewer names) on July 31st, 2013
this is an awesome trick. i just dont like how many different [edited to protect secret]. other than that awesome trick.
4 of 7 magicians found this helpful.
Did this review help you? Do you want to respond to this review?

Great teaching from Rick Lax! nice effect! Report this review
Verified buyer Pro Privacy ON (login to see reviewer names) on December 31st, 2014
a very good trick to perform and can use for various cards and pictures. you can have many versions and applicable for all types of audience!
2 of 3 magicians found this helpful.
Did this review help you? Do you want to respond to this review?
Bestsellers