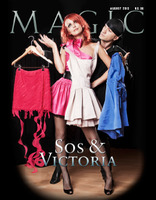 Today, when you order "MAGIC Magazine: August 2013 ISSUE", you'll instantly be emailed a Penguin Magic gift certificate. You can spend it on anything you like at Penguin, just like cash. Just complete your order as normal, and within seconds you'll get an email with your gift certificate.

The Petrosyans: New Generations and Quick Change By Alan Howard

Sos & Victoria Petrosyan are known as one of the busiest quick change acts in the world, keeping up a fast pace onstage and off. Yet they also find plenty of time for family â€” and the next generation of their family, sons Sos Jr. and Tigran, have already become acclaimed magicians in their own right.

Magic at the Fringe: Part One By Chris Philpott

Fringe festivals can provide a unique way for a magician to reach an audience, along with unusual challenges. For this first of two articles, Chris Philpott talked with several magicians who have lived on the fringes, either to move on from there or to embrace the genre and return for more.

Growing up in Texas the son of free-spirited parents, Jimi (named after Hendrix) Robinson was exposed to all manner of entertainment. He gravitated to magic and has been making a name for himself in the business — and that name is literally Bizzaro.

Luminato and Louisville: Festivals for the Rest of Us By Gabe Fajuri

This year marked the fourth year for magic at the Luminato festival in Toronto, and the first incarnation of a magic festival in Kentucky. Both events showcased diverse conjuring styles in shows for the general public, as well as entertaining and educating other magicians.

Talk About Tricks by Joshua Jay
Say What?

This month of Talk About Tricks kicks off with an unusual coin effect in which you cause a picture of a coin to become a real coin. Bank on 64th Street is a novel effect in which a spectator "chooses" an array of money for you. Timothy Paul, Alfredo Alvarez, and Daniel Chard round out the issue with three excellent card contributions.

In this effect, you see two people playing tennis on a court, like you would on a big televised match. The magician is near the camera, in frame and commenting on the game. You can see a wide-open court. At some point the two players stop playing and look up at the camera and at the magician. He comments that the player on the far side of the court could really use some backup. The magician shows a playing card that is taped to a chopstick. He slowly brings it edgewise towards the camera, making sure you can always see the space on the court around the card. He then tilts it vertically so it obscures the net. A few seconds later, he tips the card edgewise again to reveal fifteen tennis players, all on the far end of the court ready to help the one player having trouble!

Loving Mentalism by Ian Rowland
Over The Brainbow

This months "Loving Mentalism" item is a simple yet ingenious mystery about colors. The theme is that of impossible coincidence. You give a spectator eight simple cards each bearing a different color. With the cards in his own hands, the spectator first mixes them up and then chooses one at random. Despite the obvious fairness of this procedure, it turns out that you predicted exactly the color he would choose — including a physical prediction he can take away! The ingenious principle behind the mystery is one that can be adapted to many different themes and routines.

Bent on Deception by Mike Bent
We Have a Problem

"Heckler" is a comedy term that oversimplifies a complex problem. It's no surprise that the cliché of the heckler that everyone has seen in movies or on television shows doesn't mirror comedy in real life. In fact, Hollywood never seems to get the realities of being a comedian right. They usually show the one loudmouth boor in the back of the audience, yelling barbs at a flustered comic. Or they depict the birthday magician doing a show for a group of smart-ass kids wearing party hats who know how all the tricks are done. Those situations are rare in real life; the real situations are way more complex. However, if you handle them correctly, they're not nearly as painful.

50 Years at the Castle by Milt Larsen
No Room for Expansion? Place Your Bets — Double or Nothing!

Eleven years after we opened the Castle, 1974 was the start of something big. In 1972, we had literally run out of space at the Magic Castle. Every inch of the old mansion had been utilized. We even made rooms where there were no rooms. By digging out the dirt floor of the original basement, the Hat N' Hare Pub was created. Our tiny "Palace of Mystery" had been the old furnace room. The old baggage storage area in the third floor attic had been turned into the library. Porches were enclosed, but there was simply no more additional space for expansion. The Mrs. Winchester in me was frustrated, I couldn't find anything at the Castle to build or destroy…

When we say that a magician made a rabbit — or doves, or his assistant — "disappear into thin air," what exactly are we talking about?

For What It's Worth by Mark Kornhauser
Kids Don't Learn Nothing

Oh, they will be there. They will be at MAGIC Live. They will hang out in the hallways, show each other endless half-practiced flourishes, watch the shows with a mixture of admiration and envy, and maybe go home with the Next Great Idea. "They" are the young twenty-something, stubborn, chattering, inattentive, inexperienced, over-confident, aimless magicians who are the future of magic. I worry about these aspiring magi.

When I start putting together an act, I rarely seek out the advice of other magicians. Not necessarily because they are fans, but because the way magicians see magic is completely different from the way non-magicians see it. Magicians are more concerned with moves, feints, and sleights than motivation and character. They will accept blindly the use of certain props or routine structures that non-magicians would automatically question. We know why we can't show the tube and the box of a Square Circle empty at the same time. That's just the way it works, so we never question it. And because we never question it, we never think there might be a better way for it to work. We just keep doing it the same old way, never considering that it might look very odd and suspect to our audiences.
Questions about this product