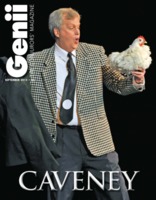 Today, when you order "Genii Magazine: September 2013 ISSUE", you'll instantly be emailed a Penguin Magic gift certificate. You can spend it on anything you like at Penguin, just like cash. Just complete your order as normal, and within seconds you'll get an email with your gift certificate.

The oldest and most respected magic magazine on the planet. This month features Mike Caveney Wonders!. READ INSTANTLY.

great concept Report this review
Verified buyer Pro Privacy ON (login to see reviewer names) on October 14th, 2013
I like how the magazine is going to video; it's great to see the effects shown and explained, so now you know how they are supposed to look like live, also good to see and hear commentaries from the pros.
Did this review help you? Do you want to respond to this review?
Bestsellers