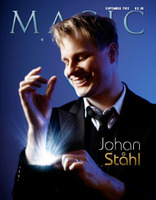 Today, when you order "MAGIC Magazine: September 2013 ISSUE", you'll instantly be emailed a Penguin Magic gift certificate. You can spend it on anything you like at Penguin, just like cash. Just complete your order as normal, and within seconds you'll get an email with your gift certificate.

FREE SHIPPING TO UNITED STATES ON ALL ORDERS OVER $50.
+ Add to Cart
Review Wishlist
Out of stock.
magazine
magic
Tweet

Swedish magician Johan StÃ¥hl has plenty up his sleeve — figuratively and maybe literally. Turning setbacks into opportunities to push himself farther, Stahl's creativity and technique have earned him awards at FISM and elsewhere. And his successes have also pushed him to work even harder at his craft.

David Magee is the star, and he's onstage to let people win. Entertaining huge crowds at a casino in Oklahoma, Magee adds magic to themed game shows, where everyone in the audience has earned a chance to win cash and prizes.

Magic at the Fringe: Part Two By Chris Philpott

Fringe festivals are not on the theatrical fringes as they once were. Many cities now hold extended festivals with dozens, or even hundreds, of shows. Continuing his interviews from last month, Chris Philpott learns how magicians can make a fringe show work for them, and how it might work against them.

Lewis Davenport began dealing in magic 115 years ago. Since that time, the family has amassed literally tons of equipment and ephemera, acquiring individual items and whole collections. Last July, a dream was finally realized when the Davenports opened a museum to preserve and display many of their treasures.

The 2013 SAM convention in Washington DC.
The 2013 IBM convention in Phoenix.
Magic on display, now or upcoming, in Louisville, Lake Tahoe, and Dublin.
MAGIC Magazine "Conventions at a Glance."
Remembrances of Albert Ching and Bart Whaley.

This month, we explore four sensational routines from longtime "Talk About Tricks" contributors. Andi Gladwin shows us his take on a very old routine. This routine requires a specially printed gaff, and we're pleased to announce that this gaff is tipped into every issue, as a free gift! Joel Givens' Cheating Suite may be the perfect, quick gambling expo to add to your repertoire, and Joshua Jay himself rounds out the issue with one of his prized parlor effects: Hitchcock.

This is a simple game with a slight con effect. You ask two spectators to assist you, then set a kind of rotating plate on the table. On this plate you have six transparent boxes, each with a tiny foil-wrapped gift inside. Each box is closed with two rubber bands and has a metal hook fixed on the lid. You give each of the spectators a child's fishing rod, ending with a simple "lasso" loop. When you start rotating the plate, the volunteers have to try to fish out as many gifts as possible, the last one being left for you. They do so, and the results at this point vary. Maybe one person is the winner, or maybe both end up fishing out the same amount of gifts. At the end, they discover what is in their respective boxes. They all have candies. Then you open the remaining box — your box — and this one is full of bank notes. Lucky you!

Jorge "The Jack" Garcia from Buenos Aires provides this month's "Loving Mentalism" routine. When I tell you it's a one-ahead routine, you might groan. But this one is more convincing than most. It looks impossibly fair and free from chicanery. Everything is checked and verified at every stage, and it really does deliver the inescapable conclusion that you can read minds. Best of all, it's easy to do and requires very little preparation.

Magicians show things empty all the time, but the minute we do, the audience knows we're going to produce something from the "empty" container. So, from the spectators' point of view, is the magician just showing something that looks empty? We all learn to get over the stilted patter of our childhood: "Here I have an empty hat…" But do we get over the need to show the damn hat empty?

50 Years at the Castle By Milt Larsen
Hollywood Loved Stars, and the Stars Loved Magic!

In a recent newsletter, Joe Furlow, the Academy of Magical Arts general manager, wrote about the many celebrities who have been involved with the Magic Castle over the years. It's quite a list. I thought it might be interesting to consider some of the famous Hollywood personalities who were involved with magic in days gone by. Some of the names I'll mention might not be familiar to our younger readers. But when Bill and I were growing up, these folks were very active in magic. In a sense, they probably created the foundation for the Magic Castle to become known as a magnet for the Hollywood stars.

For What It's Worth By Mark Kornhauser
Humiliation 101

I have always believed that if you have command of your material, you should be able to perform admirably even if there are no laughs. I guess it was the blank stares that got to me. They hated me immediately and then it got worse. When it was over, I found a quiet place and screamed. What went wrong?

Paynefully Obvious By Payne
The Cost of Magic

For every action, there is an equal and opposite reaction. This third law of motion was basically Newton's way of saying "There's no free lunch." We magicians might think we're immune to this because we can seemingly bend the laws of nature. The rules that govern the physical universe are for other people. And perhaps they are. But is there a cost for being a magician?
Questions about this product

20. OUTSTANDING by M..
See all bestsellers