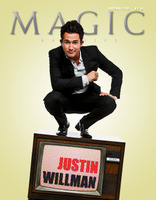 Today, when you order "MAGIC Magazine: October 2013 ISSUE", you'll instantly be emailed a Penguin Magic gift certificate. You can spend it on anything you like at Penguin, just like cash. Just complete your order as normal, and within seconds you'll get an email with your gift certificate.

For Justin Willman, breaking both arms as a child may have been the best thing that ever happened to him. Recuperating from the accident set him on the road to magic when he learned card tricks as therapy. In the twenty years that have followed, he's become a rising star — first as Justin Kredible, dominating the college market with his comedy magic shows, and now under his real name as magician, comedian, and television show host, careers that are increasingly overlapping.

Shawn McMaster journeyed through the desert to attend the 2013 edition of MAGIC Live, the sometimes biennial, sometimes triennial gathering in Las Vegas. The theme this year was "Friends," and Shawn joined 1,500 friends in watching and participating in shows, talks, games, sessions, and more, all created to bring the pages of MAGIC Magazine to life. David Linsell took nearly as many photos as there were participants, capturing the event for all to relive and share.

A Tribute to Doug Henning By Greg Curtis

Doug Henning has always been Chip Romero's magical hero. Chip has invested considerable time and money in researching Henning's work, and in purchasing props used by Doug throughout his career. On August 31, Chip took the stage at the TAOM convention in Dallas to share his knowledge and exhibit some of his collection, giving attendees a unique glimpse into the mind and skills of one of the most famous magicians of modern history.

This month's slice of mentalism is a close-up item you can carry with you so it's always ready to go. After some introductory patter, you show a spectator a list of seven different qualities that might be considered important in a relationship: Respect, Empathy and so on. You invite the spectator to just think of one (free choice, nothing written down). You then read her mind and tell her which of these seven words she's thinking of! Not a bad impromptu miracle. Does it work as cleanly as this every time? No, but when it doesn't the result is even better, more fun and more intriguing!

KEVIN: I was always amused by some of the plots from older magic routines. One that struck my interest as a kid, while I was memorizing the big fat Abbott's catalog, was the routine called Forgetful Freddy. You have a wooden cutout of a boy. His little flat wooden head vanishes and, in order to restore him, you blow up a balloon, tie it to his headless neck, pop it, and he is back to normal. I just love that idea. So I thought, Why not do it with a real, living human?

John Bannon says he has always tried to write "as though the interaction of the session was present. Not as a teacher, but as a colleague." He has taken this approach once again in his latest book, High Caliber. The text is a collection of all the material John Bannon has published in booklets, magazines, and elsewhere — often "overhauled" for republication — since the release of his previous book nearly ten years ago. The three excerpts in this issue present a sample of Bannon's thoughts and his effects with a pack of cards. As John says, "While I hope you like the tricks, with any luck, maybe you'll end up feeling like we've spent some time together on one of our favorite subjects."

Bent on Deception By Mike Bent
Polly Wants a Makeover

One of my favorite "go-to" tricks is Jolly Polly, a Monte effect with three empty cages. Invented by Edwin Hooper and Ian Adair — the Lennon and McCartney of children's magic — the game is to find Polly the elusive parrot, who is eventually discovered to have disappeared and then reappeared inside a cage that has been under a cloth since the beginning of the routine. This month's offering is Jolly Polly with a twist, a year-round version that I call Show Me the Bunny!

50 Years at the Castle By Milt Larsen
Boo! Fifty Years of Ghosts, Spirits, and Mediums, Rare and Well Done!

October has always been a month of worldwide magical interest. In the autumn evenings, kids sit around campfires and listen to ghost stories. Over the past fifty years, the Magic Castle has had its share of spooky, unexplained happenings. I've collected a number of these stories from members, and a few are my personal experiences. Is the Castle haunted? Judge for yourself.

This month's creative game begins in the familiar way: write down your creative challenge, stating it as clearly as you can. For instance, let's say you'd like to create a new magic show. Next, make a list of assumptions about your chosen subject. Write down every assumption you can think of, no matter how obvious it seems. We came up with the quite a list of common assumptions about magic shows.

For What It's Worth By Mark Kornhauser
We Are All 793.8

There were 73 interviews in the First Trick project at MAGIC Live, with about an equal mix of professional and amateur magicians. Many great moments were recorded in the 14 hours and 111 gigabytes. The accidental circumstances that surrounded these stories were a reminder that a fortunate perfect storm made us who we are today. If you had gotten a Hohner harmonica for Christmas instead of that Sneaky Pete Magic Kit, you might be in a blues band right now. What was so great about these early experiences? How could the Nickels to Dimes change so many lives?

Paynefully Obvious By Payne
Why Do We Repeat Ourselves?

In 1936, Tommy Tucker stood before an audience and counted out a packet of six cards. From this he threw three cards away, and yet, as we now know all too well, he was still left with six cards. Little did Mr. Tucker realize that this seemingly innocuous act would release upon the magic community a bevy of copyists that would remain unsurpassed until Bob Carver showed the world what could be accomplished with three seemingly unequal lengths of rope.
Questions about this product

over 50 years and still the best Report this review
Verified buyer Pro Privacy ON (login to see reviewer names) on October 25th, 2013
THIS IS A PROFESSIONAL MAGAZINE FOR THE PROS AND BEGINNERS ,MAGIC MAGAZINE IS A CLOSE 2ND .THERE BOTH GREAT DIFFERENT STYLES BUT EVERY ISSUE IS A 5 STAR WINNER ,IVE BEEN DOING MAGIC FOR 34 YEARS AND IT NEVER FAILS THAT I LEARN SOMETHING NEW EVERY MONTH WITH MAGIC,AND GENII...PLUS MOST WANT ADMIT IT BUT I LOVE THE ADS AND REVIEWS ALTHOUGH PENGUINS REVIEWS ARE THE BEST IN THE MAGIC WORLD PERIOD CAUSE THERE BY REAL PEOPLE WHO OWN THE ITEM REVIEWS BY PRO REVIEWERS SOMETIMES ARE BIAS IF THEY LOVE COIN MAGIC THEY TEND TO BELITTLE ALL TRICKS BUT COINS ECT.....
Did this review help you? Do you want to respond to this review?
Bestsellers