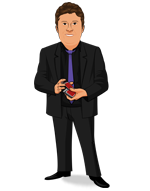 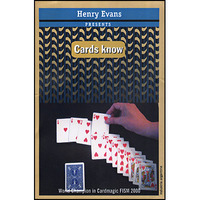 Today, when you order "Cards Know by Henry Evans", you'll instantly be emailed a Penguin Magic gift certificate. You can spend it on anything you like at Penguin, just like cash. Just complete your order as normal, and within seconds you'll get an email with your gift certificate.

A spectator selects a card which is left on the table unknown to everybody. The magician says the cards know which one is missing from the deck, and they will tell everyone. The only thing the magician must do is snap his fingers to make them "speak". He proceed to snap his fingers and spread the cards to show a card magically appearing face down in the middle. This process is repeated three times and the ace, two and three of the same suit appear. However, the four does not reveal itself when called, so the magician flips the deck over and snaps his fingers many times, spreading the deck to show all cards from 5 to King magically face up. Finally, the card which was selected in the beginning is shown to be the missing four.

Looks impossible, but it's so simple Report this review
Pro Privacy ON (login to see reviewer names) on April 22nd, 2011
When you see this effect performed, you will be blown away. Even though a card turns over in the deck 3 times in a row, you will never see the move no matter how closely you watch. This is one of those rare effects that look absolutely impossible but don't require weeks of practice. You will look like a true card mechanic while relaxing and entertaining your audience. There is really only one move in this effect and once you learn it (in about one minute) you will be able to create this magic moment. I sat three feet from Henry watching this and never figured out what was going on. I kept thinking I was missing something, but the problem was I kept looking for a move when it had already happened long before I realized I should have been paying attention.

The deck could be examinable casually, but a thorough examination may spoil things. If nothing else, you can definitely relax if someone grabs the deck and says "Let me see that". However, I wouldn't let them study it forever.
1 of 1 magicians found this helpful.
Did this review help you? Do you want to respond to this review?

Not Very Practical for Every Performance Report this review
Verified buyer Pro Privacy ON (login to see reviewer names) on August 26th, 2013
You need to ribbon spread on a table and carry a gimmick deck to do this effect. However, the gimmicks are well concealed to the lay audience and under the right circumstances this could play big. It's a bit pricey, but it Henry Evans, so at least you know your supporting one of the good guys.
Did this review help you? Do you want to respond to this review?
Bestsellers