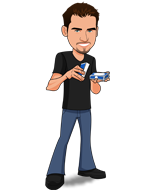 Today, when you order "Cue the Magic by Angelo Carbone", you'll instantly be emailed a Penguin Magic gift certificate. You can spend it on anything you like at Penguin, just like cash. Just complete your order as normal, and within seconds you'll get an email with your gift certificate.

Cue the Magic by Angelo Carbone

"Angelo Carbone is one of the most clever and creative minds in magic. Cue the Magic is Angelo at his best and should be in the repertoire of every standup performer." -Richard Kaufman

"Yet again Angelo has come up with an idea that is so brilliant and combined it with a method that is devilishly simple. Just wonderful!" -Andy Nyman

"Love this routine. It's as fooling as it is funny." -Justin Willman

"Stage routines as interactive and entertaining as Cue the Magic are very rare. I love performing it and you will too!" -Jon Allen

"Cue the Magic is not a trick, it's an ingenious routine." -Asi Wind

Cue The Magic by Angelo Carbone is a laughter packed routine that makes a spectator an instant magician. Not only are laughs guaranteed, but the magic is super strong too! Here is the effect...

You ask your audience who would like to become a magician and perform their very own trick. A volunteer joins you on stage and you ask them to read out the script on the cue cards you are holding. During the routine, a second volunteer comes up on stage who freely names ANY playing card. Eventually when the last cue card comes into view an envelope is seen which contains the freely thought of playing card. Wow!

Cue The Magic packs flat and plays BIG! It is great trick to get a CEO or birthday child on stage and make them the star of the show. You just sit at the side with your cue cards and they do all the performing for you.

There is absolutely no force of playing card. Any card can be freely named and it will be in the envelope. Powerful stuff!

Easy to do yet strong in effect.

As seen on The Tonight Show with Jay Leno.

So let the magic begin... three, two, one and Cue the Magic!

Cue The Magic Report this review
Verified buyer Pro Privacy ON (login to see reviewer names) on January 27th, 2016
Great routine and everything you need to get great reactions
See the video performance it's as easy as it looks
Top of my best purchase list
3 of 5 magicians found this helpful.
Did this review help you? Do you want to respond to this review?

A bit pricey... Report this review
Verified buyer Pro Privacy ON (login to see reviewer names) on February 5th, 2021
I love this trick, it's been a staple in my virtual shows and I am sure it will kill when my live shows come back. It's a well made prop, clever method, great gags and easy to use with some practice.

The effect does require you to interact off the cuff and improv with some responses, to add comedy and length to the routine. If you just let them read off the cards it can be quite boring.

It's a nice trick, probably as strong as the invisible deck but you let the participants accept the applause as opposed to yourself.

Now I do think it is very very pricey for what it is... it could be cheaper but none the less I think it would be a fine addition to any act on Zoom/Stage/Kids shows!
Did this review help you? Do you want to respond to this review?

Great effect!! Report this review
Pro Privacy ON (login to see reviewer names) on March 31st, 2018
I love using this effect! It makes a spectator the star!!! Always gets a wonderful reaction!!!
Did this review help you? Do you want to respond to this review?
Bestsellers