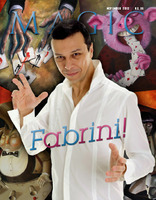 Today, when you order "MAGIC Magazine: November 2013 ISSUE", you'll instantly be emailed a Penguin Magic gift certificate. You can spend it on anything you like at Penguin, just like cash. Just complete your order as normal, and within seconds you'll get an email with your gift certificate.

Fabrini! An Artist in Two Realms By Kevin James

The comedy magic act of Vik & Fabrini came to the attention of the magic world when they won a major prize at FISM in 1988. While they have been employed continuously since that time, Fabrini has also followed a different artistic path, creating fantastic and unusual works of art.

An Aristocrat Among Pickpockets By Kenny Quinn

Danish magician Tommy Iversen crafted an international career as a pickpocket without really planning to do so. Yet once his wife and his agent agreed they could do something new, Gentleman Jack was soon born, charming audiences the world over while comically lightening their pockets.

The Healing of Magic By Kevin Spencer

As Kevin Spencer gradually built his own touring show of grand illusion, he didn't think there could be anything better. But he was wrong. Once he discovered the therapeutic, healing power of prestidigitation, a new world opened up for him - a world he has shared with many others.

When Magic Comes to Town By Mike Heidtman

Billed as "The Future of Magic," the themed, character-driven magic and illusions of Dale Scott and Ana have taken them around the world — quite a journey for this boy from a show business family in Ohio and a fitness instructor from Spain.

The effect in this month's edition of "Loving Mentalism" is very simple: using your psychic energy, you are able to warp and distort a photo stored on your cell phone. The photo is openly displayed at the start, and it is clear that you do not switch the photo or open a different one. The spectators check the results for themselves, without your touching or handling the phone at all, and yet the photo they saw before is now warped and distorted as if zapped by psychic energy. This is a low-tech idea that will work with any phone capable of storing a photographic image.

Over the last 22 years, we've been proud to present some incredible magic on the pages of this magazine. Close-up to stage, kids to mentalism — it could (and did) fill volumes! This month, we're "flashing back" to the very beginning, 1991, to revisit three routines from the early issues of MAGIC Magazine: Twisted Trio by Larry Jennings, Michael Skinner, and Derek Dingle (September 1991); The Duck Change by Hiro Sakai (September 1991); and Passage To China by Giovanni Livera (December 1991).

First Look: The Approach By Jamie D. Grant
How Many Tricks You Should Know, Open Versus Closed Body Language, Transitions, "Do It Again!"

For over a decade, Jamie D. Grant has entertained thousands of people from all walks of life, having been asked — and paid — to bring people to a place of joy and wonder. In his new book, The Approach, he strives to turn readers into working magicians and gives a detailed account of what a journey to success will require.

Bent on Deception By Mike Bent
Women! Can't Live With Them… No, Wait, Actually You Can!

50 Years at the Castle By Milt Larsen
Fifty years of Fires, Riots, Floods, and Earthquakes

California is known as "the land of shake 'n' bake." Yes, we do have more than our share of earthquakes and fires but, all in all, it's a great place to live. There is no doubt that the sunny climate of California helped ensnare magicians from the East to set up stakes in Southern California so they could be near the "cathedral of conjuring" in Hollywood.

Still, we have to wonder if there isn't an umbrella of magical force that protects those who choose the life of magic.

Something happened at MAGIC Live that still lingers in my head. Patrick Thernes bared his heart and soul to 1,500 of the most jaded magicians in America. "Yes! Yes! Yes!" they said. And while it is unfortunate that there are not enough Joanie Spina units to go around, the Legend of Sir Pat-Trick should be an inspiration not only for a legion of future Sir Pat-Tricks, but also for other Joanie Spinas. We could use more of both.

For 31 years, much to the consternation of my ever-suffering wife, I spent the waning days of summer performing at a little Medieval Faire not too far from my home. Well, to be fair, the first couple of years I lived over 100 miles away, so it took three hours to get there. I eventually moved to a city much closer to the site. Which is one of the reasons I performed there for over three decades. At least, that's what I told myself. Truth be told, the main reason I stayed there was that I'm lazy.
Questions about this product