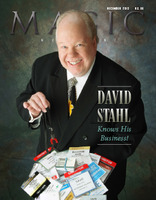 Today, when you order "MAGIC Magazine: December 2013 ISSUE", you'll instantly be emailed a Penguin Magic gift certificate. You can spend it on anything you like at Penguin, just like cash. Just complete your order as normal, and within seconds you'll get an email with your gift certificate.

David Stahl is, among other things, a tradeshow magician, a magic collector, a family man, and someone with entertaining tales to tell. These aspects all come together in his holiday tradition of staying in touch with clients by sending a card each year showing a charming take on classic magic.

The Magic of Germany - In Theaters, Salons, and Lounges By Wittus Witt

The latest trend in close-up magic, at least in Germany, is the intimate theater setting crafted especially by and for individual magicians. These venues allow performers and audiences to focus on the magic, without the common distractions of a walk-around or restaurant gig.

Bob Cassidy on Mentalism By Jheff

Having attained legendary status in the world of mentalism, Bob Cassidy is known as a performer, author, and consultant. Here, he discusses his background in magic, his own approaches to mental mysteries, and what mentalists should and should not do.

The Bulldog Deck or The Scary Movie Routine By Bob Cassidy

A trick from the act of Bob Cassidy, in which the mentalist divines not only what a spectator read on a card, but what another spectator merely thought of.

J.N. Hofzinser: Non Plus Ultra by Magic Christian
Cardopia by Jázsef Kovács
2013 UK Lecture Tour Notes by József KovÃ¡cs
The Complete Mojo by Wesley James
Clean Cash by Marc Oberon
Where do the Ducks Go?
Celestial Mechanics by David Davies
Spirit Cards by Andrew Loh
Complete Peek Wallet by Anthony Miller
Magical Things I Really Do Do Too! by Christopher A. Manos
Polyester by Zivi Kivi
Turbo Stick by Leo Smetsers and Richard Sanders
Miracles without Moves by Ryan Schlutz

Loving Mentalism By Ian Rowland
A Meeting Of Minds

This month's edition of "Loving Mentalism" is all about a simple gaff that you can make in under a minute and for less than one cent. Once you have made it, you will be able to prove to anyone, anywhere, that you can read their mind and they can read yours! Although the method is simple, it involves a bit of sly psychology to help your spectator friend fool themselves (so much easier than you having to do all the work) and assist the illusion of genuine telepathy taking place.

In One By Stephen Hobbs
Ten-Card Wild, Spring Multiple Shift, SCG, and A Puzzle

In this column I'd like to share with you my ending for the classic Ten-Card Poker Deal, a card move I've dubbed the spring multiple shift; an idea for use with the classic Gilbreath principle; and a close-up routine that doesn't use cards at all. These are all items I have developed while being fascinated with card magic and close-up magic for 25 years.

Bent on Deception By Mike Bent
A Bribe for Santa!

As a kid, I was a craft monkey. All I ever wanted for Christmas, besides magic sets, were model kits, paint-by-number sets, Thingmaker molds (I love the smell of Plasti-Goop in the morning!) — anything that had to be glued, painted, or snapped together. So this time of year, I get a strong hankering to make stuff. I hope you do, too, because this month's offering is a do-it-yourself project with a holiday theme!

50 Years at the Castle By Milt Larsen
Here's to the Next Fifty Years!

Over the past eleven months, I have tried to share stories about the Magic Castle that haven't been told before, and I'll admit there were times when that seemed like a nearly impossible task. Over the past half century, the Castle has been the subject of three books by myself and with Carol Marie, plus every Friday for the past forty years, I have written various stories and anecdotes about the Castle. And yet I was surprised by how many stories were waiting to be told. I suppose there a million more stories and happy memories of the Castle still hidden in the catacombs of the mind — not my mind, perhaps, but in the recollections of 5,000 members of the Academy of Magical Arts.

For What It's Worth By Mark Kornhauser
There Will Be Blood

At 11 p.m. I wake up on the floor of the green room. I'm lying next to a space heater, and my dog Goulash is lying next to me. We've been in rehearsals since noon and this isn't our first late night. Some of the cast went out for coffee, but somehow I felt it best to stay here, on the floor. I recite a familiar prayer: "Please, lord, keep me healthy until the opening."

Paynefully Obvious By Payne
Magic, The Gift of Immortality

Unfortunately, these days writing seems to be a skill that is going the way of the buggy whip and the bed warmer. Even the simplest tricks now come with an instructional DVD instead of the illegible and incoherent mimeographed instruction sheets that used to accompany them. The publication of magic books is rapidly being supplanted by digital media. There is a good chance that before this decade is out, even this august publication will only be available in a downloadable version.

If you play a musical instrument, you probably remember when you first started to learn. In the beginning, it was difficult to get that silly thing to cooperate with your intentions. Yet there are few feelings as exhilarating as when you make a key discovery and things start to go right. This is beginner's mind, a state of openness, discovery, and curiosity — and yes, sometimes frustration, but also excitement. Sadly, that state of mind doesn't last. Fortunately, there are plenty of simple games we can play to invoke beginner's mind again, giving us the chance to see our work from a fresh perspective and make new discoveries and advances.
Questions about this product