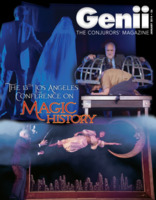 Today, when you order "Genii Magazine: January 2014 ISSUE", you'll instantly be emailed a Penguin Magic gift certificate. You can spend it on anything you like at Penguin, just like cash. Just complete your order as normal, and within seconds you'll get an email with your gift certificate.

Magician’s Choice An Excerpt from A Novel by Todd A. Gipstein

I don't need a bottle...I got a penguin Report this review
Verified buyer Pro Privacy ON (login to see reviewer names) on January 1st, 2014
been reading this magazine for years...never subscribed - it gave me a reason to travel over 150 miles round trip to the shop that sold secrets...ya just don't do things like that anymore...it's a digital age ...now IF we could get "the other magazine" to realize that not everyone uses a "apple a day" and there's other ways to distribute their advertisers to the mass market that drools over every page ...all would be well with the world.
Did this review help you? Do you want to respond to this review?
Bestsellers