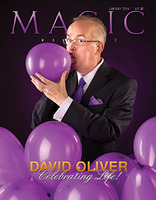 Today, when you order "MAGIC Magazine: January 2014 ISSUE", you'll instantly be emailed a Penguin Magic gift certificate. You can spend it on anything you like at Penguin, just like cash. Just complete your order as normal, and within seconds you'll get an email with your gift certificate.

It's Wonderful - Life By Mike Bent

In his magic career, David Oliver was known for mentoring and unfailingly helping others. When he was diagnosed with a fatal lung disease stemming from his many years of performing with birds, the magic community returned the favors, helping David beat the odds with a double lung transplant.

When magician and trick inventor Andrew Mayne takes to the streets, peculiar things happen — sometimes just puzzling, sometimes teaching a victim a lesson, and all captured on a new A&E television series.

Last November, Harry Monti set a record unlikely to be beaten: performing at the Magic Castle every year for the past half-century. And that's just one of the many accomplishments of this magician, escape artist, and creator of enduring magic props.

Snapshots of History By Stan Allen

Every two years, the Los Angeles Conference on Magic History is held by invitation only. The 2013 edition featured another enviable display of classic magic and scholarly presentations.

After leaving a career in magic to become one of the world's leading builders of shipping cases, Gary Peterson returned to his performance roots by creating his own theater within his manufacturing plant and warehouse.

In One
David Solomon

Over the past five years, David Solomon has published 55 monthly installments of his e-zine, the Card Magic Bulletin, and his name has been a prominent one in the realm of card magic for much longer than that. The four effects in MAGIC Magazine this month follow typify David's brand of card magic: classic effects that are direct and easy to follow, but each one reworked with well-considered and subtle touches that will not only take in anyone "in the know," but will deeply fool those who are not.

A familiar plot with a very unfamiliar ending is on offer this month. You scribble a prediction in pencil on the back of your business card. Three selected objects are arranged in a row. Their order is rearranged according to the audience's free choices. That's right, the audience freely chooses how to rearrange the objects. Clearly, the point of this exercise is that your written prediction will correctly name the chosen order. It's the sort of thing that could be achieved using a nail writer or similar device to "cheat" the prediction before the big reveal. This is what suspicious minds might suspect, and you encourage their suspicions. When you turn over your prediction, it becomes clear that you only pretended to write something at the start. In fact, the prediction message is preprinted on the back of the card, and embossed in gold ink. The prediction is 100 percent correct, and it's ungaffed, so you can give it away.

Bent on Deception By Mike Bent
A Fly on the Wall

The SAM Annual convention was being held in Boston in 1981, and Ray Goulet was the head honcho. A few weeks before the show, John Calvert, the convention's star attraction, came to town. He and his wife, Tammy, stayed at Ray's home, and the Magic Art Studio became their base of operations. Was I impressed? No. I had never even heard of John Calvert.

The creative process is a personal reflection of our individual quirks, habits, and preferences. What works for one person might not work for someone else. Similarly, what works well for tackling a particular creative challenge might not be well suited to working on a different one, which is probably why Stewart James developed and collected a great variety of creative tools. In the "Creative Play" series, we too have provided a variety of approaches, so you can experiment with them and use the ones you find most appealing.

Let's say you don't yet have a website or that your website is not yet bringing you the number and quality of leads that you'd like. This article will examine alternative booking referral websites that may prove helpful until your own website starts to bring in the leads.

After a two-year hiatus, we now begin 24 new installments of this column with a short, handwritten note from the Italian illusionist Chefalo. Raffaele Chefalo immigrated from Italy to America in 1900. As a young man, he worked in a Boston barbershop that was conveniently located near the well-established magic shop of W.D. LeRoy. It was during this time that young Raffaele's interest in magic blossomed. It's impossible to imagine that Raffaele didn't, at the very least, become a customer of LeRoy's and quite possibly a student at his school of magic.

For What It's Worth By Mark Kornhauser
OMG! Maturity!

As it turns out, life is not fair. Childhood influences are disproportionately powerful. Kids lucky enough to be influenced by theater arts will develop an appreciation of acting, music, technology, and the meaning of the art form. Those kids have a much better start in the world of magic than that clever, hard working junior high school kid who has never seen anything other than YouTube clips, and his Uncle Morrie doing Sponge Balls.

Of all the things I've ever done for a magic act, furtively taking drugs in an airplane bathroom is definitely one of the most — let's say, memorable. The drugs themselves were perfectly legal, though the reason I was taking them was more of a gray area.
Questions about this product