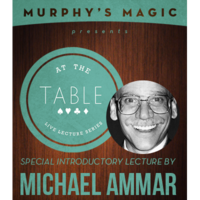 Today, when you order "At the Table Live Lecture starring Michael Ammar", you'll instantly be emailed a Penguin Magic gift certificate. You can spend it on anything you like at Penguin, just like cash. Just complete your order as normal, and within seconds you'll get an email with your gift certificate.

At the Table: Michael Ammar

Well, if you're going to do a live, online lecture, why not start with the ABSOLUTE, UNDISPUTED "best" lecturer of all time, the incomparable Michael Ammar. And, since it's our very first online lecture experience, rather than .99, YOU CAN JOIN US FOR JUST ONE DOLLAR. Crazy, right? Crazy cool!

Many of us have seen Michael Ammar lecture before, at a convention or magic club. But you have NEVER seen Michael Ammar like this. Michael will perform some things he has never lectured on before, and will also speak candidly with host Joshua Jay about his career, advice for other magicians, philosophy on creativity, what the future holds for magic and Michael, and more. We'll ask him about his time with Vernon, what's is like to perform in exotic countries, and what excites him MOST about magic in 2014. This will be up close, personal, and a riveting two hours.

We won't linger, either. We will keep the program to a tight, fascinating two hours, and we'll make sure it's jam-packed with magic, fully performed and explained. And don't forget--this one is just a DOLLAR.

We want to SHOW YOU just how incredible the technology is that we have developed, and how much you'll enjoy attending Michael's lecture from the comfort of your own home.

Also: bring questions! You'll have an opportunity throughout the lecture to ask questions via your computer; this is your chance to interact with living legend Michael Ammar!
Questions about this product

A chance to spend two hours learning from one of the modern greats of magic Report this review
Pro Privacy ON (login to see reviewer names) on February 5th, 2018
MICHAEL AMMAR

Michael Ammar was named by Magic magazine as one of the most influential magicians of the 20th century. Certainly he is highly regarded by the magic industry as one of its best ambassadors and teachers. So for the very first At The Table episode, who better to feature on the program than Michael Ammar? Joshua Jay is the inaugural host, and does a fantastic job of interacting with Michael for this session, which would pave the way for the many sessions with other magicians that would follow. The beauty of this format is obvious: it allows viewers from around the world to witness a magic lecture, with technology giving them opportunity to ask questions on the fly. Multiple camera angles ensure a front-row seat and visuals that even top witnessing it in person - plus you can have repeated viewings as often as you like. While Michael Ammar has delivered many lectures to hundreds of people, never before was his live audience so large as this time, with the help of technology!

The At The Table lecture with Michael Ammar was filmed and broadcast on 5 February 2014. Altogether the video lasts for just over two hours. It's also available from the many Murphy's Magic retailers, such as Vanishing Inc Magic here.

Since many magicians have previously seen lectures from Ammar, rather than reprise material from his usual presentations, Michael made a deliberate effort to cover all new material here. So what was included in this particular lecture?

- Analysis of Letterman TV segment: To begin with, in the first half hour Michael Ammar and Joshua Jay view and analyse Michael's performance on David Letterman's Late Show in 2010. This included four effects, and you can see the original performance:

- Silk Through Mug: Ammar surprises Letterman by a beautiful penetration of a sil through the arm of a coffee mug. This section includes an explanation of how the effect was performed, and the gimmicks used.

- Pressure: While this isn't taught, this phase of the routine features Ammar performing Daniel Garcia's "Pressure", in which a cell phone visually and magically penetrates a balloon.

- Topit Phone Vanish: Next Ammar vanishes the phone with the help of a Topit, and he explains some of its benefits and uses, including how to use it while seated.

- Little Hand: This coin vanish features a little hand by Bob Farmer reaching out and visually stealing a coin. It's extremely charming and made a great close to the segment.

- Broken and Restored Screen: Here Michael teaches how to do an impromptu effect with a friend's phone, apparently first breaking the screen, and quickly fixing it. It's not difficult to create the gimmick required, and Ammar explains everything necessary to perform it.

- Pencil Through Coin: Ammar has been developing a new approach to this old effect, and debuts what this looks like. At the time this was still something he was developing, so it can be considered a sneak peek of a work in progress.

- Impromptu Card Effects: Joshua gives Ammar a deck of cards and asks him to demonstrate what he'd perform impromptu if handed some playing cards, which gives Ammar opportunity to demonstrate a simple "pick a card" effect which involves a nice side-steal and easy to use revelation. He also goves on to explain a quick transposition effect, and then an impromptu effect with a credit card which produces a coin.

- Bill Serial Number: In a departure from his usual style, this segment has Ammar perform and then explain a stunning mentalist effect in which he divines the serial number of a bill borrowed from a spectator. He uses a very offbeat presentation that involves telling a joke, and the sleight required is very straight forward and easy to do. Great routine!

- Add A Number: This is a well known-effect in which spectators contribute numbers which are added together to produce a total predicted by the magician, but Ammar offers an interesting tack where this is presented as a mentalist effect rather than a prediction effect.

- Crazy Man's Handcuffs: This is perhaps my favourite part of the video. In an elaborate section, Ammar carefully runs through this classic of rubber band magic in which two rubber bands penetrate each other. Like many others, I learned this effect a long time ago, but Ammar teaches some important nuances about the handling that really helps make this work well. And if you're new to this effect, this is a great place to learn it.

- Broken and Restored Rubber Band: This is a great follow-up to the Crazy Man's Handcuffs, and Ammar shows how to move from one to the next, and explains a couple of ways to perform this.

- Question and Answers: Throughout the episode, there are regular questions that are asked by the online audience, which Joshua puts to Ammar, and a couple of times there is also interaction with the live audience that is in the studio. The final 30 minutes of the session focuses on Ammar taking questions from the online audience, which cover a wide range of magic-related topics.

Any time spent with Michael Ammar is well worthwhile, and here you get more than two full hours worth! What I especially appreciated about the segment with Letterman was not only Ammar's explanation of how he performed the effects, but his insider's perspective about performing on TV, and how he handled the challenges this poses. This is a world foreign to most of us, and it was fascinating to hear what this experience was like for him.

An At The Table episode like this is great value, because it covers performances and explanations of multiple tricks. Not everything demonstrated is explained, such as the Phone in Balloon trick (Pressure) or the new Pencil Through Coin method. But the majority of the effects are shown and explained, and the tips Michael Ammar gives on handling are often invaluable. Purchasing a video for a single trick often sets you back $10, so for less than that you get a whole series of classics and new effects to watch and learn. I especially found the section on the Crazy Man's Handcuffs just terrific, and it will really help me improve my own performance of this beautiful classic.

Michael Ammar is not only a big name in magic, but he's also a gentleman and great guy, and his conversational style and interaction with Joshua Jay (who is terrific as well) is a real pleasure to watch. I especially enjoyed his many off-the-cuff comments and responses to questions, and there's so much to be gained from listening to this man besides just learning a new trick. Areas covered throughout the video include topics like what inspires him to try new things; the difference between performing for the public versus teaching magicians; how to structure an act; the impact of the internet and the future of the magic industry; how to get restaurant gigs and how to introduce yourself to a restaurant table. Towards the end he also shares some hilarious anecdotes about Dai Vernon, from whom Ammar learnt a great deal.

The At The Table lectures are excellent value, given the amount of material on each episode, the relatively low cost, and the opportunity to sit at the feat of world-famous magicians. This inaugural episode was an outstanding show, and the content still holds its own a few years after it was first produced. If you haven't yet seen it, I highly recommend it, because besides the obvious performances and explanations of multiple tricks, you'll also learn a lot from the more general insights that Ammar shares in this very intimate close-up setting. Recommended!

- BoardGameGeek reviewer EndersGame
2 of 2 magicians found this helpful.
Did this review help you? Do you want to respond to this review?
Bestsellers