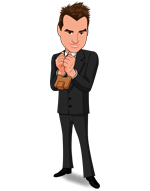 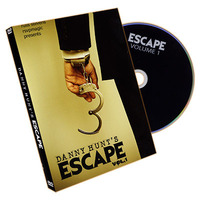 Today, when you order "Escape Vol. 1 by Danny Hunt & RSVP", you'll instantly be emailed a Penguin Magic gift certificate. You can spend it on anything you like at Penguin, just like cash. Just complete your order as normal, and within seconds you'll get an email with your gift certificate.

Welcome to Escape, the brand new DVD featuring one of today's leading escape artists, Danny Hunt. For the first time learn the real secrets to escaping from ANY lock or handcuff, as you're taken into a side of magic that has rarely been looked into before.

DUE TO THE NATURE OF THE MATERIAL ON THIS DVD, ALL OF THE TECHNIQUES ARE TO BE USED FOR ENTERTAINMENT PURPOSES ONLY.

Worst introduce to escapology ever Report this review
Pro Privacy ON (login to see reviewer names) on May 20th, 2020
If you wanna start in the art of escapology, please do not listen to anything on this video. He talks about lock picking as someone you must learn, which is false and could be pretty dangerous in underwater scapes and so.
As someone who already have some bases in scapology i had the constant feeling that he was hiding the truth and making everything look way harder than it is.
If i had seen this as my first scape DVD i would never have become an scape artist.
1 of 1 magicians found this helpful.
Did this review help you? Do you want to respond to this review?

Awesome introduction to lock-picking Report this review
Verified buyer Pro Privacy ON (login to see reviewer names) on April 2nd, 2010
I have been looking at lockpicks lately so the timing of this video's release couldn't have been better! Danny Hunt has put together a DVD explaining lockpicking and escapes in a very organized, user-friendly method.

This first volume deals mostly with padlocks and handcuffs, and how to escape them using tapping or using lockpicks. He does show how to use shims as well for padlocks, but some of the newer locks are made to defeat this method so it may not work if you try it at home.

Because Danny is from the U.K. (and the video was filmed there), some of the locks he demonstrates are not going to be familiar to an American audience. It's still interesting to see how they are defeated though.

Danny takes you step by step through each type of lock and how to defeat it. He shows you which lockpick is perfect for each individual type of lock just before he tears into the lock itself. He does a bang-up job of beating each one within seconds.

I haven't watched the second volume so I can't attest to how good it might be, but this one is great for anyone interesting in putting an escape routine into their performance (or if you just want to know how to pick a lock for fun). There aren't any real stage performances here, and I think Dixie Dooley has a better set of DVDs strictly for those grand stage illusion escapes anyway.

Is there anything here you won't find on YouTube from some kid breaking locks in his basement? Well, there's a little, yes. He shows you how to make your own gimmicked handcuffs, which is a nice little bonus. You also get some thoughts on performance and structure in escapes. Volume 2 reaches more into the stage escape area, so it might be a little stronger for a magician. Still, if you're interested in picking locks, this is a well-taught DVD on the subject. The only annoying thing is the swimming text title shot just before each segment. Sometimes the segments are less than a minute long, so you have that title shot flowing at you quite often. It's a minor thing though, so don't let that keep you from buying this!
1 of 1 magicians found this helpful.
Did this review help you? Do you want to respond to this review?
Bestsellers