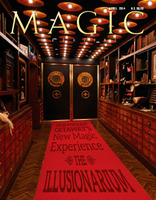 Today, when you order "MAGIC Magazine: April 2014 ISSUE", you'll instantly be emailed a Penguin Magic gift certificate. You can spend it on anything you like at Penguin, just like cash. Just complete your order as normal, and within seconds you'll get an email with your gift certificate.

Wittus Witt: It's All About the Art By Marcus Zink

Magician, collector, historian, author, publisher, photographer, and opinionated artist — Wittus Witt holds a unique place in the world of magic, not only in his native Germany, but around the world.

A Conversation on Character, Part I

The Magic Castle recently hosted a panel discussion on various aspects of creating and performing magic in character. Rob Zabrecky moderated the evening, interviewing Ed Alonzo, Tina Lenert, John Lovick, and Woody Pittman — all of whom did not necessarily have similar opinions on the subjects.

At Northwestern University in Chicago, Dr. Ricardo Rosenkranz teaches medical students to be better doctors — by teaching them magic. His popular Magic & Medicine classes open students' eyes to the importance of relating to their patients as magicians do to their audiences.