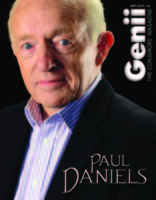 Today, when you order "Genii Magazine: April 2014 ISSUE", you'll instantly be emailed a Penguin Magic gift certificate. You can spend it on anything you like at Penguin, just like cash. Just complete your order as normal, and within seconds you'll get an email with your gift certificate.

A DVD included! Report this review
Verified buyer Pro Privacy ON (login to see reviewer names) on May 31st, 2014
What else can I say? A 6 dollars magazine that fives away a DvD, Crazy! Some Paul Daniel's Magic taught.
Did this review help you? Do you want to respond to this review?
Bestsellers