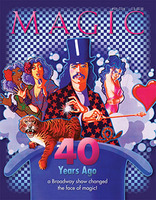 Today, when you order "MAGIC Magazine: May 2014 ISSUE", you'll instantly be emailed a Penguin Magic gift certificate. You can spend it on anything you like at Penguin, just like cash. Just complete your order as normal, and within seconds you'll get an email with your gift certificate.

FREE SHIPPING TO THE UNITED STATES.
+ Add to Cart
Review Wishlist
Out of stock.
magazine
other
Tweet

May 1974 saw the opening of a Broadway show that changed the face of magic. Our multipart tribute includes:

The Show
A synopsis of the plot and events in the show.

Concept to Curtain
The story of the show and its creators, and how they ended up on Broadway.

Stephen Schwartz on The Magic Show
An interview with the famed composer and lyricist.

On and Off the Road
The touring companies, the international editions, Broadway after Henning, and the movie.

Legacy
The pivotal role that The Magic Show played in magic history.

A Conversation on Character, Part II

Rob Zabrecky moderated a panel discussion at the Magic Castle on various aspects of creating and performing magic in character, interviewing Ed Alonzo, Tina Lenert, John Lovick, and Woody Pittman — all of whom did not necessarily have similar opinions on the subjects. This edited transcript of the evening continues from Part I last month.

He enjoys a successful career, having sold out large performing arts centers with his full-evening show; he starred on magic television specials and won awards at magic conventions. While you might not yet know Reynold Alexander, most people in his part of the world don't think of him as a Puerto Rican magician — he is the Puerto Rican magician.

The Monk's Way By Steve Reynolds
What is Magic to You?

What is magic to you? Is it a profession, hobby, or distraction? Whatever it is, it's one thing to all: a performing art. Whether you perform for a paying audience, your mirror, the gang at work, or your dog, one thing is sure: without that feedback (arf!) it is just an abstraction. The performance is where substantial learning happens. But ask yourself what kind and quality of answers the mirror or dog can provide. There are questions that can only be answered in interactive real-world activity with other human beings. And let's look at how the answers to some of these questions can be put into practice, since all theory should result in action.

Flashback By Jon Racherbaumer
Inside Out

When I officiated "Inside Out," three or four items were explained each month, which adds up to about 36 to 48 items yearly. During my tenure, over 300 tricks were explained. Over 300 "seeds" were sown. Looking back over these seeds, it's uplifting to note how many remain timely and commercially applicable. This "Flashback" features creations by Chad Long, Gregory Wilson, and the late Johnny Paul, reminding us that many of the tricks in a magazine's "morgue" are very much alive. These three items are still viable, waiting for readers to reanimate them and make them their own.

One of the perks of mentalism is taking credit for miracles that we haven't actually performed — and probably wouldn't be able to. Audiences are very good at misremembering magic effects in such a way that the trick they think they saw is far more impressive than the one we actually performed. This month's "Loving Mentalism" offering is specifically engineered to exploit this fact. You'll get the credit and applause for somehow knowing the identity of a thought-of tarot card selected under "test conditions" (no stack, no force or control). In reality, you neither knew nor cared what it was!

Bent on Deception By Mike Bent
An Accident Waiting to Happen? No Problem!

My secret passion is the Container Store. If you don't have one near you, you should seriously consider moving. For those of you who don't know what it is, the name literally says it all. It's nothing but aisles and aisles of containers of all shapes and sizes to help keep things organized. The Container Store hasn't really helped me get my life organized. Just a quick look at my office, basement, and garage will confirm that. But over the years, I've found lots of great props to help my magic, cases that are just the right size to protect specific props, and ways to make travel a little easier. Mostly, though, I've become fascinated with containers, especially tiny ones. And that fascination has helped fuel another obsession: my car emergency kit.

Cecil Lyle has been called the last of the great touring illusionists, having wrung the last bit of life out of Britain's music halls, working up until his death in 1955. Though he never brought his show to America, he and his wife, Lucille, visited the States twice. On both occasions, they spent time with John Mulholland, who served as editor of The Sphinx. John had inquired in a previous letter if Lyle might like to submit an article for the fiftieth anniversary issue that was still a year away. Lyle was flattered by his friend's request and typed this response onto two sheets of his attractive letterhead.

For What It's Worth By Mark Kornhauser
Stage Sex

Every performer has his/her/whatever sexual vibe. We like to think our sex vibe is just something that emanates from our natural being. Manipulation acts usually like to think that they emanate a subtle, simmering sensuality. Illusionists might go more for the power play. Close-up guys usually go for hip. Comedy magicians — usually go for breakfast at Denny's.

Magic competitions are odd things. I've entered a lot of them, won a few, and in the past few years I've started to get asked to judge them. There are a lot of good reasons for magic competitions to exist, many of which I've hugely benefited from myself. They give an incentive to develop and polish new material, provide performance experience and stage time, and let up-and-comers showcase their work. They can also result in award-winning acts that are a little — strange.