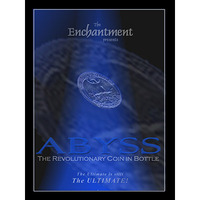 Today, when you order "Abyss The Revolutionary Coin In Bottle by The Enchantment", you'll instantly be emailed a Penguin Magic gift certificate. You can spend it on anything you like at Penguin, just like cash. Just complete your order as normal, and within seconds you'll get an email with your gift certificate.

Abyss The Revolutionary Coin In Bottle by The Enchantment

You will be hard-pressed to find a stronger effect, at a better value than this...Years ago, ABYSS - The Ultimate Coin in Bottle revolutionized the coin in bottle illusion by producing an original method and effect never before possible. The Enchantment, producer of Skywalker, Archangel, and Dreamweaver, once again is releasing ground-breaking innovation that will transform magic hereafter.

The Enchantment presents ABYSS - The Revolutionary Coin in Bottle. Now you can perform the Ultimate Coin in Bottle routine with more revolutionary means, more possibilities, more practicality, and more impact.

The magician visually pushes a borrowed coin through and into an ordinary bottle. It is so visual people swear there must be a hole in the bottle. But the bottle is completely normal; free of any holes, slits, or openings of any kind. The coin is completely normal as well. That's right. The coin and the bottle are both ordinary, everyday, common items. No trick bottles, no trick coins. Everything is regular. The next kicker is that the coin is genuinely trapped inside the bottle and impossible to get out. The coin is far too large to get in or out of the bottle and remains fixed permanently in this impossible condition.

The bottle is 100% Completely Sealed! The seal is unopened and has never been tampered with in any way...ever! Finally, this completely sealed bottle, with a coin trapped inside, that is too large to get in or out of the bottle, can be immediately handed out to your spectators for thorough examination, and as an astonishing keepsake. Needless to say, this is a genuine reputation maker.

ABYSS is packed full of totally new and original concepts, techniques, unbound possibilities, self-working presentations, as well as an authentically signed small coin in permanently sealed bottle routine where you give away an incredible souvenir.

This is pure, straight-forward, visual magic that is otherwise impossible on so many levels. The possibilities will excite and inspire you. The simplicity and ingenuity will surprise you. This is not merely a trick, but a genuine miracle that can be done virtually anywhere. There have been many releases that have emulated ABYSS since it was first released, but the ultimate is still the Ultimate!

Gimmick not compatible Report this review
Verified buyer Pro Privacy ON (login to see reviewer names) on March 25th, 2012
I tried the gimmick(s) on Poland Spring, Aquafina, and Deer Park bottles. Did not fit.
2 of 2 magicians found this helpful.
Did this review help you? Do you want to respond to this review?

Not for me Report this review
Pro Privacy ON (login to see reviewer names) on April 5th, 2010
Okay this is great when done properly but I was mislead in the description, I states (not sure what site this was on) that the coin can be signed and there was no method in my booklet for a signed method at all. After contacting the store I purchased from I realized it may have been a mis print but I still don't believe the effect is worth it.
1 of 2 magicians found this helpful.
Did this review help you? Do you want to respond to this review?

Blow them away! Report this review
Verified buyer Pro Privacy ON (login to see reviewer names) on August 9th, 2013
superb and eye-popping penetration, the booklet has sundry handlings, each of them brilliant! Abyss resembles true wizardry!
Did this review help you? Do you want to respond to this review?

ABYSS Report this review
Pro Privacy ON (login to see reviewer names) on May 13th, 2010
THIS IS GREAT MAGIC. CAN BE DONE IMPROTU. I ALWAYS CARRY A BOTTLE OF SODA WIYH ME. I AM ALWAYS READY TO PERFORM. IT CAN BE SET UP TO DO ANYWHERE IN ABOUT 15 SECONDS. I HAVE HAD NOTHING LESS THAN AMAZING REACTIONS TO THIS EFFECT. MUST BUY FOR MAGI THAT DO MAGIC ON THE FLY OR WITH EVERYDAY OBJECTS. I LOVE IT
Did this review help you? Do you want to respond to this review?
Bestsellers