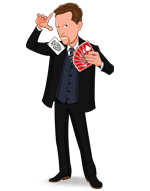 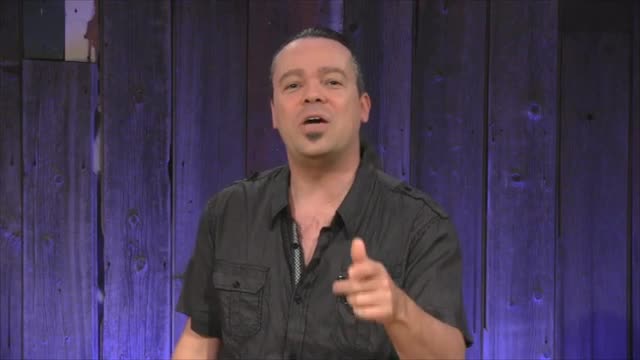 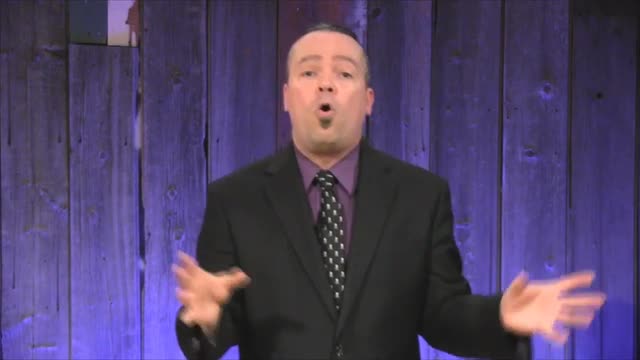 Today, when you order "Diamond Jim Tyler LIVE", you'll instantly be emailed a Penguin Magic gift certificate. You can spend it on anything you like at Penguin, just like cash. Just complete your order as normal, and within seconds you'll get an email with your gift certificate.

One of the busiest and most successful working magicians in the world came to Penguin for a special live event. SUPPORT LIVE MAGIC. DOWNLOAD THE FULL LECTURE TODAY.

"In the first hour DJT broke the record for most magic per minute!" -Dan Harlan

“Diamond Jim is a wonderful thinker who really understands the construction of powerful magic effects. I thoroughly enjoy his work because he fools me on a regular basis. He’s also got a super sharp wit that totally cracks me up. This guy’s lecture is a must-see event.” -Geoff Williams

"Jim Tyler is truly a Diamond in the magic world. Time and money spent to listen and learn from him is not an expense, it’s an investment in your future.” -Shawn Farquhar

Soaring Straw
A straw comes to life and is seen to float from hand to hand.

Paperweight
The magician correctly guesses the number of cards from a cut-off stack time and again.

Fireball
A piece of paper is torn into pieces, burned and restored in a blaze of glory.

One-Armed Aces
The magician cuts the pack with one hand each time revealing an ace.

Trapdoor Coins
Three coins penetrate a tabletop one at a time.

Magnetic Coins
Two ordinary coins are made to look and act magnetic.

Birthday Bill
A hole-puncher is waved over a dollar bill causing holes to magically appear and reveal a surprise message.

Diamond’s Dazzler
A chosen card is made to fly face-up from the center of the deck.

The Ripple Effect
For the first time ever DJT teaches a neat card move using a close-up mat.

FBI Trick
A comedy escape routine with a surprise vanish of the thumb cuffs.

Mythos
A wild card routine that spins the many myths around mirrors into an incredible feat of magic. Playing cards visibly change into mirrors!

Mirraculous
You’ll take a shining to this clever method for revealing a freely selected card.

Mental Monte
Someone thinks of one of three face-up cards. While the magician’s back is turned the cards are turned face down and mixed. The card is always found.

Lift Gag
Using brute human strength you lift someone high in the air with your forearms.

Invisible Dice
The spectator rolls a pair of invisible dice. After doing what seems like some random math the magician correctly divines exactly what they rolled.

Sweet
A borrowed coin is signed and vanished only to reappear inside of a sealed sugar packet that’s been in plain sight the entire time.

PLUS...
A ton of gags and one-liners!

Diamond Jim may just be the worker of all workers! He started learning magic at five, grew up working in a magic shop and turned pro at 16!

He put himself through college, performing magic and worked restaurants for 19 years. He currently works everywhere from his neighborhood to Hollywood!

He's performed in twenty-two countries, and has a list of corporate clients on his site that took us sixteen clicks to scroll through!

He's even performed for celebrities such as Katy Perry and Scarlett Johansson, and he's a regular guest on Scam School.

He's won awards from the Texas Association of Magicians and the International Brotherhood of Magicians, and is a regular at the Magic Castle.

Plus, he has released many books and DVDs for magicians, including his best-selling book and video "Pockets Full of Miracles."

A Worker's Lecture Report this review
Verified buyer Pro Privacy ON (login to see reviewer names) on May 29th, 2014
There are a variety of different kinds of lectures. For some, the attendees (in and out of the room) are content to simply see the work of an incredible technician. Richard Turner comes to mind. While Richard is happy to teach his material, it will take lots of time and practice (years in some cases) to be able to perform it.
Other lectures are entertaining. David Williamson or Harry Anderson's lectures were worth the price just for their entertainment value. Add in the material taught and the lectures are an incredible deal.
Then there are the workers lectures. These are the times when a real world performer shares the material with which he makes a living. Diamond Jim's lecture is a worker. The lines are funny, the tricks clearly explained, and the performance venues carefully outlined (e.g., this is a walk around trick when done this way, a table trick when done this way).
If you are a real worker, or you aspire to be one, do yourself a favor. Buy this lecture. You will never regret it and your audiences will love you for it.
8 of 8 magicians found this helpful.
Did this review help you? 1 comment

BEST Lecture ever produced at Penguin LIVE ! ! ! Report this review
Verified buyer Pro Privacy ON (login to see reviewer names) on May 27th, 2014
If 10 Stars was an option, this lecture deserves it but I can only select 5 stars.

I've purchased EVERY single Penguin LIVE Lecture since May of 2012 and THIS is got to be the VERY BEST of all time.
In the first hour of the Lecture, Diamond Jim showed MORE than any other Lecturer has ever done. I think Dan Harlan said it was a record.

If you've never purchased any of these LIVE Lectures produced by Penguin Magic, then THIS should definitely be your first. 2 hours: 48 Minutes FULL of entertainment and content without a single boring moment.

5 of 5 magicians found this helpful.
Did this review help you? 1 comment

Worth every penny in the first 10 minutes and it just gets better. Report this review
Verified buyer Pro Privacy ON (login to see reviewer names) on May 27th, 2014
Diamond Jim teaches amazing real world workers at an enjoyable pace with just the right amount of detailed instruction. The comedy he naturally incorporated throughout the lecture will show you what you should strive for.
I enjoyed the lecture from start to finish. I think I forgot to blink until it was over.
Along with this lecture Diamond Jim gives you a downloadable gift that is worth much more then the price of the lecture. Amazingly Jim was kind enough to help me with a substantial question I have been pondering over for some time.
I highly recommend buying this lecture!
And if you are serious about magic, please become a penguinlive subscriber. There is no better way to stay inline with your dream.
And.. No I don't work for PenguinMagic

3 of 3 magicians found this helpful.
Did this review help you? 1 comment

Diamond Jim Delivers Report this review
Verified buyer Pro Privacy ON (login to see reviewer names) on May 30th, 2015
I love the Penguin LIVE lectures! All that I have seen have exceeded my expectations by delivering loads of quality, marketable effects and invaluable advise from those whose livelihoods depend upon delivering effects that are practical and astounding. Diamond Jim Tyler is no exception. He delivers one effect after the other. I am so glad to have this in a repeatable format so I can go back and view it again and again (which I have done). If I were at this lecture live (with no video) I would have gone crazy trying to make note of all the wisdom and technique that Diamond Jim presents. It would be like drinking from a fire hose. Anybody looking for some serious, sustainable, doable effects along with great gags and humorous quips should check out this lecture. My only question is: When is Diamond Jim Tyler LIVE 2 coming? I can't wait.
2 of 2 magicians found this helpful.
Did this review help you? 1 comment

Magic Reviewer Report this review
Verified buyer Pro Privacy ON (login to see reviewer names) on December 18th, 2014
This is probably the best lecture (in terms of best practical effects, presentation, and humor) I've seem from penguin, and I think this is better than Mark Mason, kainoa harbottle, peter turner, peter Samelson, jason dean, Norman beck, dani daortiz 2, joshua jay, chris mayhew,daniel garcia, and john Gustaferro. These are probably all around second place, and I've watched many more lectures. However that is not the point the point is super great. He even gives you a free gift that would cost you exactly $30. You learn TONS of HILARIOUS one liners and jokes. I'm going to stop here because I can't do this man justice.
BUY NOW!!!
2 of 2 magicians found this helpful.
Did this review help you? 1 comment

Get This Lecture! Report this review
Verified buyer Pro Privacy ON (login to see reviewer names) on May 28th, 2014
Jim Tyler's lecture is one of my favorites from Penguin. The magic is practical and Jim is a great teacher. He is an experienced professional, and has designed some audience-proven, GREAT effects that you WILL use in your performances.

His sense of humor is just plain fun, and I'm adding some of his jokes to my act.

Don't stay on the fence about this lecture. GET IT! and you'll be happy with the magic he has created.

This guy is GOOD! Go for it!
2 of 2 magicians found this helpful.
Did this review help you? 1 comment

Fantastic Investment Report this review
Verified buyer Pro Privacy ON (login to see reviewer names) on May 27th, 2014
Diamond Jim's a Penguin Magic Lecture is the best couple of hours you can buy. His down-to-earth, practical and fun style comes through in this lecture and gives both the beginner and the professional fantastic tips, insights and useful information. If you buy only one lecture, buy this one!
2 of 2 magicians found this helpful.
Did this review help you? 1 comment

ALL I CAN SAY..... Report this review
Pro Privacy ON (login to see reviewer names) on December 21st, 2015
ITS THE BEST PENGUIN MAGIC LIVE LECTURE YOU CAN BUY!!!!!!
1 of 1 magicians found this helpful.
Did this review help you? 1 comment

DJT is Xalent! Report this review
Verified buyer Pro Privacy ON (login to see reviewer names) on November 11th, 2014
Diamond Jim Tyler is a true worker of magic. If you are serious about the art form you have to get into this guy. Brilliant , funny and skillful he knows how to keep it going with a variety of routines. His ideas and suggestions are great for the aspiring magician. Get this lecture you won't regret it...
but i'm going to have to give it 6 stars for the one-liners...
1 of 1 magicians found this helpful.
Did this review help you? 1 comment

Awesome lecture! Report this review
Verified buyer Pro Privacy ON (login to see reviewer names) on May 29th, 2014
This was a great lecture! Not only great material, but a lot of inspiration on how to be more entertaining.
1 of 1 magicians found this helpful.
Did this review help you? 1 comment
Load more reviews
Bestsellers