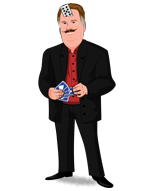 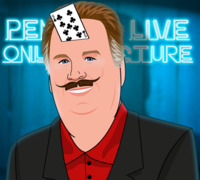 Today, when you order "Dan Garrett LIVE: Forward Into the Past", you'll instantly be emailed a Penguin Magic gift certificate. You can spend it on anything you like at Penguin, just like cash. Just complete your order as normal, and within seconds you'll get an email with your gift certificate.

Dan Garrett LIVE: Forward Into the Past (Penguin LIVE)

A brand-new lecture experience filled with magic from Dan's working repertoire of both past and present. SUPPORT LIVE MAGIC. DOWNLOAD THE FULL LECTURE TODAY.

“Dan Garrett has one of magic’s most entertaining and creative minds.” –David Copperfield

"Dan Garrett has built a career by creating and using beautifully constructed and presented pieces of magic. He truly is one of the finest practitioners in our art today. You will not be disappointed!" -John Carey

“Dan is a unique performer with skills in, comedy, close-up, stage, mentalism and a general knowledge few magicians can boast. He's an excellent teacher and should be one of yours.” -Bob Sheets

“I have ALWAYS loved Dan Garrett's magic! It would behoove ANYONE to watch and learn from his lecture.” -Daryl

The contents include mainly close-up magic and mentalism with coins, knives, paddles and cards. It has been rumored that there is even a grand illusion in this lecture.

Serious magic and comedy magic: there is truly something for everyone. Emphasis is placed on improving your performances and tapping in to the emotions and intellect of your audiences.

The GodMother of All Book Tests
Easy to perform and nothing to buy. 2 books, 2 participants, 3 minds, 1 thought.

Up the Creek WITH a Paddle
See the classic paddle move in a whole new light. Dan will make you an offer you can’t refuse.

Desire Under the Elms(leys)
A strange and wonderful biological circus routine with a few acrobatic cards.

Epic - Marked Down
A mentalism act for close-up or stage that fits in your pocket and costs less than to make.

Two Foreseen
The miracle that everyone who witnesses this lecture is talking about. A double impossible CAAN (card at any number) with no memory work or technical skill required.

PLUS, there will be even more magic, some character impersonations, and he'll teach you about the awesome power of words!

He'll also show you how you can improve your performances by tapping into the emotions and intellect of your audience.

Dan Garrett wears many hats, as a performer, inventor, lecturer, author, columnist, publisher, teacher and reviewer. He performs at ease with every conceivable demographic of audience, large or small, children or adults, family groups or corporate clients.

Dan has been featured on the cover of the I.B.M.’s magazine The Linking Ring, and twice on the cover of the S.A.M.’s magazine M-U-M. In the November 2012 issue of M-U-M, Dan Garrett was first on a list of magicians described as “a living magic legend [and] an artist who defined close-up magic in the last years of the twentieth century.” He is Past National President of the S.A.M., Past Territorial Vice-President of the I.B.M., Member of the Inner Magic Circle (M.I.M.C. with Gold Star) in London, and a Guest of Honor at F.F.F.F. (the original close-up magic convention, now known as “Obie’s 4F”), where he currently serves on the Board of Directors.

Dan Garrett has also been a feature writer for Stan Allen’s MAGIC magazine. Dan is an M-U-M columnist and product reviewer, who has performed live on CNN Headline News.

Dan has been a full-time pro for 40 years. He has lectured world-wide, in over a dozen countries. Dan has produced six lectures and three “fully-loaded” DVD’s on magic, plus his acclaimed “Over the Rainbow” routine for color-changing disks. He performs and teaches magic for many different audiences and situations. Stan Allen has called Dan a “general practitioner of magic.” Others have described Dan as a “great teacher of modern-day magic and methods.”

If you've never been to a magic lecture, theres never been a better time. Sunday June 1st at 7:00pm, we're live-streaming Dan Garrett LIVE in a spectacular 2-hour interactive online lecture. Watch, ask questions and learn things you won't find in any book or DVD.

Neat Stuff. Great Book Test. Report this review
Verified buyer Pro Privacy ON (login to see reviewer names) on June 25th, 2014
Dan is a great teacher,book test is worth the price of the lecture alone. I've used it 20-30 times and it never fails to get amazing reactions, and costs literally the price of two books. The coolest thing about this book test is you could do it more than once for the same person/crowd and reveal different words each time. top notch.

I'll be buying the amazing jumping arrow after seeing him play with it, and great advice on the paddle move with safety pins, business cards, paddles, coins and cards.
his ACAAN is good, but was the only thing in the lecture i wasn't completely satisfied with, as it does require a bit of set up. overall great lecture. EPIC marked down seems fun for a kids show as well.
3 of 3 magicians found this helpful.
Did this review help you? Do you want to respond to this review?

Great Lecture Report this review
Verified buyer Pro Privacy ON (login to see reviewer names) on June 3rd, 2014
I was totally impressed. Dan is a consummate teacher and a wonderful judgee of material. YOU will not be disappointed if you buy this lecture. A very worthwhile four hours . Buy it!
3 of 3 magicians found this helpful.
Did this review help you? Do you want to respond to this review?
Bestsellers 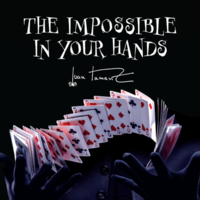