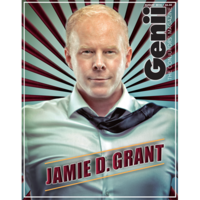 Today, when you order "Genii Magazine: August 2014 ISSUE", you'll instantly be emailed a Penguin Magic gift certificate. You can spend it on anything you like at Penguin, just like cash. Just complete your order as normal, and within seconds you'll get an email with your gift certificate.

Jamie D. Grant: Anything is Possible by Jaq Greenspon
Introducing Walter Rolfo by Cecelia Garrone
Through the Looking Glass by Liberty Larsen
Tom Palmer and His Comedy Act by Paul Osborne
2014 Shenanigans by Joe O'Donnell

Tricks Reviewed by Danny Orleans
The Floating Ball by Luis de Matos
The Most Magical Cards Ever Produced in the History of Magic by Angel Idigoras
Distorted Visions by Jack Curtis
Velocity by Rick Smith, Jr.
Sudoku Book Test by Scott Creasey
Noted 2.0 by Gary Jones
Infamous by Daniel Meadows and James Anthony

Books Reviewed by Will Houstoun
The 75% Production and The Trick With No Method by Justin Higham
Angel Killer by Andrew Mayne
Bullet Catch by Scott Jenkins
Magicians Choice by Todd A. Gipstein
The Definitive Guide to Restaurant Magic by Wayne Goodman