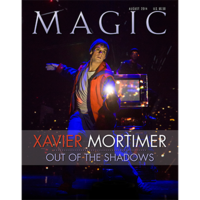 Today, when you order "Magic Magazine: August 2014 ISSUE", you'll instantly be emailed a Penguin Magic gift certificate. You can spend it on anything you like at Penguin, just like cash. Just complete your order as normal, and within seconds you'll get an email with your gift certificate.

The Rise in Custom Playing Cards
By Chris Chelko
Playing cards are arguably the most popular magic prop in the world, but of course not only magicians buy cards. Recently, designer decks have become all the rage for card players and collectors, and they may be changing the face of magic.

DMC
By Jaq Greenspon
Drummond Money-Coutts, often known simply by his initials, comes from a respected British family of nobles. Yet he is making a name for himself in the world of close-up magic, with a television special behind him and new projects to come.

How Was the Convention? Impressions & Snapshots
Words by Stan Allen
Photos by Arto Airaksinen
This summer, the IBM and SAM joined together to hold their tenth Combined Convention. Everyone who was there came back with stories to tell, but here are just a few - mostly visual - impressions of the magic week in St. Louis.