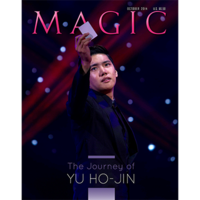 Today, when you order "Magic Magazine: October 2014", you'll instantly be emailed a Penguin Magic gift certificate. You can spend it on anything you like at Penguin, just like cash. Just complete your order as normal, and within seconds you'll get an email with your gift certificate.

The Journey of Yu Ho-Jin
By Gregory Bracco
Yu Ho-Jin's road to becoming the 2012 FISM Grand Prix champion has been paved with dedication and countless hours of practice. This South Korean's act is already a modern classic - and he is still just 21 years old.

Joanie Spina: 1953 - 2014
By Alan Howard, Joanie Spina & Friends
Joanie Spina was an influential, inspirational figure in the world of magic, and her death leaves a void in the lives of numerous friends. Here are memories from some of those friends, along with excerpts from Joanie's popular "Directions" column.

Who Was Dr. Jaks?
By Leo Behnke
Stanley Jaks was a pioneering performer in the fields of close-up magic and mentalism. While he might not be widely remembered today, there has been a revived interest in his life and work, both of which are represented here.

Revisiting the Haunted Mansion: Disney's Magic Show
By Stan Allen
The spooky mansion that gradually took shape at Disneyland through the 1960s showcased ghostly illusions old and new, built into an amusingly scary attraction. The stories behind the ghosts are as intriguing as the haunts themselves.