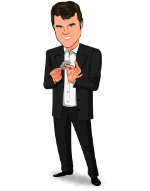 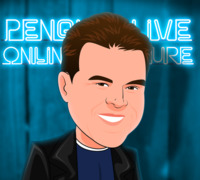 Today, when you order "John Carney LIVE", you'll instantly be emailed a Penguin Magic gift certificate. You can spend it on anything you like at Penguin, just like cash. Just complete your order as normal, and within seconds you'll get an email with your gift certificate.

"One of the best lectures I have ever seen ... excellent advice ... His tricks are superlative...an expert in pure sleight-of-hand." -- Dai Vernon

"John is truly a man who understands magic." -- Tommy Wonder

"Carney has rediscovered and reinvented classic platform magic. He talks to you like a guy, a mentor, a tough-love teacher. He doesn't expect you to come to him with a 5th degree Elmsley-Aronson black belt. But he does expect you to love magic as much as he does, and be willing to earn your miracles." -- Teller

"One of the top magicians around. A great creator, student and performer." -- Charlie Miller

"Here is a real insight into the way John thinks about magic, the way he combines past inspirations with current motivations, and the continual process of searching, trying, experimenting, and improving to find the best result. [He] made me think about magic in a new way." -- Jim Steinmeyer

"His ideas are refreshing and his routines are beautifully executed. I recommend him highly!" -- Michael Skinner

"In the past few years I have drifted away from being a true student of magic. John Carney has rekindled that flame. To have regained this feeling is a gift." -- Mike Close

"Whether you are an amateur or professional, you will derive both knowledge and inspiration from a Carney lecture. This young man has the happy ability and the genius to impart it!" -- Faucett Ross

Logical Bill -- Three coins are produced from a dollar bill, then, the logical surprise finish.

Coins in the Mist -- Pure sleight-of-hand, with the effect of pure magic. Two coins disappear very cleanly at the fingertips, then reappear.

Chill pack -- Every time you perform card magic, why not begin with the startling production of the pack of cards? Quick and visual, it makes them sit up and take notice in the first 10 seconds.

Inscrutable -- While looking for the aces, all that are found are jokers. Finally all the jokers change in a very visual way. Variations on Derek Dingle’s Regal Royal Flush.

Versa Switch -- One of the cleanest ways to switch four cards for four others.

Bullet Train -- Cards up the sleeve with just the aces. The final ace is a great effect, and a big laugh.

Everywhere and Nowhere -- Three cards are produced, but none are the selected card. First, they all change to the selected card, then back to their former identity, as the selection is found in a most surprising place.

John Carney is the real deal. His approach is smart, engaging and always surprising. He is widely acknowledged by his peers as one of the top sleight-of-hand magicians in the world. The Magic Castle has awarded him Magician of the Year more times than anyone in their history, and he is the only performer to win in every category: Close Up, Parlor, Stage, and Lecture. He has had numerous television appearances, including Late Show with David Letterman and the Jerry Seinfeld HBO Special. Carney embodies the state of his art, combining exceptional skill and creativity with pure entertainment.

Within 24 hours of ending, you'll be able to download and/or watch the full lecture on-demand, and go over all the great routines and subtleties as many times as you want. It'll be waiting for you in your MyPenguinMagic area.

Not Thrilled Report this review
Verified buyer Pro Privacy ON (login to see reviewer names) on March 16th, 2017
First, the magic on this lecture. There's not that much of it. Second, it's not his best stuff. Third, the stuff that is good is very hard and has been out there for decades. Fourth, the tips and nuances...at least for me it's all well covered topics.

I'm a huge fan of John's. I love seeing him at the Castle. But this was not worth the money for me.
5 of 6 magicians found this helpful.
Did this review help you? Do you want to respond to this review?

Food for thought. Report this review
Verified buyer Pro Privacy ON (login to see reviewer names) on October 7th, 2018
As many of the reviewers have already stated, this lecture is not about learning a bunch of new tricks. It's about making your magic better. His insights alone are worth the price of the lecture, but the magic is phenomenal as well.
Even if you don't learn any of the effects taught, you can still apply his advice to something you already know. Highly recommended.
2 of 2 magicians found this helpful.
Did this review help you? Do you want to respond to this review?

great sleight Report this review
Verified buyer Pro Privacy ON (login to see reviewer names) on March 10th, 2017
I respect his skill of being natural. I attended his workshop in Tokyo last month. That was even greater. Hope to meet him at Magic Castle
2 of 2 magicians found this helpful.
Did this review help you? Do you want to respond to this review?

John Carney Live Report this review
Verified buyer Pro Privacy ON (login to see reviewer names) on October 26th, 2016
If you are serious about your magic, learn from this Live Penguin. This is what a lecture should be about. He didn't just perform tricks then teach them. He gave you really important tips and knowledge for anyone regardless what type of magic you are interested in. Please listen carefully to his opening dialoge.
1 of 1 magicians found this helpful.
Did this review help you? Do you want to respond to this review?

what a lecture!!!!!! Report this review
Verified buyer Pro Privacy ON (login to see reviewer names) on February 3rd, 2015
Hi guys,
I don't wrote any review normally but this is one of the best lecture i ever watch and every penny spend on it completly worth it.
John doesn't teach you just tricks to amaze your friends or your audiance but he goes deeply in the why and how all things work.
He speaks about misdirection in detail (body language, on and off beat, the position of the eyes etc)
In fact actually when i watch a lecture i pley with my toys as Paul Daniels says but this time my attention was close to the screen and my hear are wide open.
i don't understand why John or Dan didn't mention the carney 2013 at http://www.carneymagic.com/store_carney2013.html if you whant to have more detail in go to check it. it's woth it too.
You have some great tricks to in this lecture, two fix to me and they are the Leipzig card trick and the coin stuff.
if you don't like the tricks please give you a favour apply what he says and your magic will be so much butter...
Thank you John to share those principle and great magic, Thnak you Dan for your participation and Thank you to all the staff of penguin magic who make this wonderfull lecture possible!

Ps: i'm a french guy so forgive me if my english was not so good.
1 of 1 magicians found this helpful.
Did this review help you? Do you want to respond to this review?

Get taught the right way to do magic! Report this review
Verified buyer Pro Privacy ON (login to see reviewer names) on January 19th, 2015
I've been a professional magician for 13 years and I learned more from this lecture than learning 20 new tricks. Not that that John doesn't teach amazing routines but what's so great about this lecture is that he reminds you how to look at creating and presenting your magic in the best possible way. If you are a beginner or a professional, this lecture is pure gold dust! It's also a lecture you can go back to over and over again as each lesson he teaches has something, although we know, we need reminding of again and again to keep to keep improving our magic. John is a true inspiration.
1 of 1 magicians found this helpful.
Did this review help you? Do you want to respond to this review?

Outstanding!,,, Report this review
Verified buyer Pro Privacy ON (login to see reviewer names) on March 15th, 2020
John Carney is a Master Magician and his lecture reveals his great experience not only “teaching secrets of tricks” but going more in depth to explain the correct misdirection necessary to improve your magic effects.
I enjoyed very much his comments on his mentors Fawcet Ross, Dai Vernon, Charlie Miller and David Roth.
His lecture is highly recommended to any serious student of the magic art!
Did this review help you? Do you want to respond to this review?

Much more than great magic tricks Report this review
Verified buyer Pro Privacy ON (login to see reviewer names) on May 7th, 2018
Terrific lecture from a modern master. The tricks he teaches are great, and there's so much value in the details and subtle touches he provides.

I found his advice on bottom dealing very useful. He explains useful ways of practising and good applications for its use in magic routines, as opposed to gambling routines.

Carney is a direct link to the great masters, such as Dai Vernon, and getting to learn from him in this sort of open forum is a gift.
Did this review help you? Do you want to respond to this review?

John Carney LIVE Report this review
Verified buyer Pro Privacy ON (login to see reviewer names) on May 17th, 2017
John is without a doubt one of the best teachers in magic. His attention to detail and thorough analysis of an effect is a lesson itself.

I received more instruction with his comments during the lecture as the tricks themselves. John has shared very good information/insights for those who are looking for more than trick/explanation.
Did this review help you? Do you want to respond to this review?

Great Magic, Great Teacher Report this review
Verified buyer Pro Privacy ON (login to see reviewer names) on November 28th, 2014
John Carney has a wonderful ability to teach the reason for actions (theory if you will) at the same time that he is teaching routines. This lecture is a perfect example of such teaching. The pieces that you will learn are wonderful, but not the best part of the lecture. The best part are the bits and pieces that are "thrown in" as the routines are taught.
This is highly recommended; one of the best lectures that I have seen in my life and I have seen a lot.
Did this review help you? Do you want to respond to this review?
Load more reviews
Bestsellers