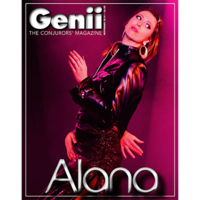 Today, when you order "Genii Magazine - November 2014 - Book", you'll instantly be emailed a Penguin Magic gift certificate. You can spend it on anything you like at Penguin, just like cash. Just complete your order as normal, and within seconds you'll get an email with your gift certificate.

Features
Alana: Defining the (Fine) Lines by Dustin Stinett
What to Expect at FISM by Cecilia Garrone
Tenyo 2015 by Richard Kaufman

Now Performing
In Memoriam Lubor Fiedler by Mark Setteducati
Memoirs of a Magic Dealer
Cons Pulled on a Magic Dealer? by Al Cohen
The Chamber of Secrets The French Peacock by John Gaughan
The Genii Session (Maybe Not So) Ultimate Details of Handling IV by Roberto Giobbi
Cardopolis Return to Oil and Water by David Britland
The Expert at the Kids' Table
Assistance in Choosing Assistants by David Kaye
Panmagium Staring at Wires by Jonathan Pendragon
Magicana by Andi Gladwin
Coining a New Phrase by Yasuo Amano
Clear Glass Concept by Alex Linian
Card Under Irony by James Alan
The Academy of Magical Arts in Genii
Knights of the Magic Castle by Daniel Ulin
Magic Castle Performance Schedule

Books Reviewed by John Lovick
How to Become a Professional Magician by Sean Mitchell
793.8: Where is The Magic by Jeff Stone
The Opposite of People by Michael Feldman