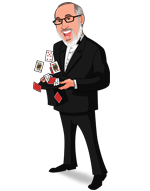 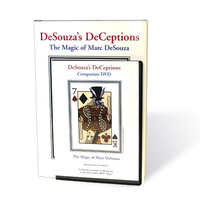 Today, when you order "DeSouza's Deceptions (With DVD) by Marc DeSouza - Book", you'll instantly be emailed a Penguin Magic gift certificate. You can spend it on anything you like at Penguin, just like cash. Just complete your order as normal, and within seconds you'll get an email with your gift certificate.

Imagine a collection of material that is perfectly crafted for real-world use, each effect tried and tested hundreds of times before thousands of people, then trimmed to remove every last ounce of fat. Imagine a repertoire of routines that can each steal a show, astonishing in effect and cunning in method, parcelled in presentations that are amusing, entertaining and engaging. Imagine that you are holding such a treasure trove of material in your hands right now!

Plus Miniature Bowling Ball From Briefcase, Snowflake, Copper/Silver My Way, Picasso's Bill,The Cover Change, and so much more! DeSouza's Deceptions is pure, audience-tested deception, lavishly illustrated with over 220 photographs. Hardcover, color dustjacket. 142 pages. Includes Companion DVD of Live performance of routines and tips on sleights.
Questions about this product