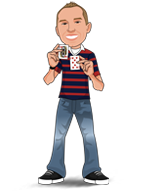 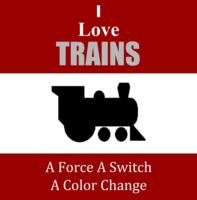 Today, when you order "I Love Trains By Joshua Burch", you'll instantly be emailed a Penguin Magic gift certificate. You can spend it on anything you like at Penguin, just like cash. Just complete your order as normal, and within seconds you'll get an email with your gift certificate.

In this download you will learn a color change that can also be used as a force and a switch.

In this download you will learn a color change that can also be used as a force and a switch.

This download teaches a powerful utility move that can be used as a color change, switch and a force. Each application is taught in detail OVER THIRTY MINUTES, including SIX ROUTINES, taught from multiple angles and with live performances.

As a color change it can be performed standing up, with a borrowed deck, at eye level, virtually surrounded, without a table, doesn't change the order of the deck and can be instantly repeated or performed in a cycle.

As a switch it can be used to replace a top change or double lift, adding an extra visual moment allowing the spectator to see the face till the moment it it is turned over.

As a force it mimics the classic force, changing the moment and eliminating some of its difficulty.

Over the course of the download 6 routines are taught.

Any Card at Any Number- A card is named, lost in the deck any number is called out and the named card is shown to be at the number.

Color Change- A card is selected the spectator is challenged to find their card, when it looks like they missed the card appears magically right in front of their eyes.

Great change Report this review
Pro Privacy ON (login to see reviewer names) on November 9th, 2014
This is a utility move, but I usually prefer to use this as a color change. It's very visual. Even though it takes a little bit to get the knack down, it is well worth learning. I recommend this to anyone who wants a good solid color change, switch, and control. 5/5 great work Josh!
2 of 2 magicians found this helpful.
Did this review help you? Do you want to respond to this review?
Bestsellers