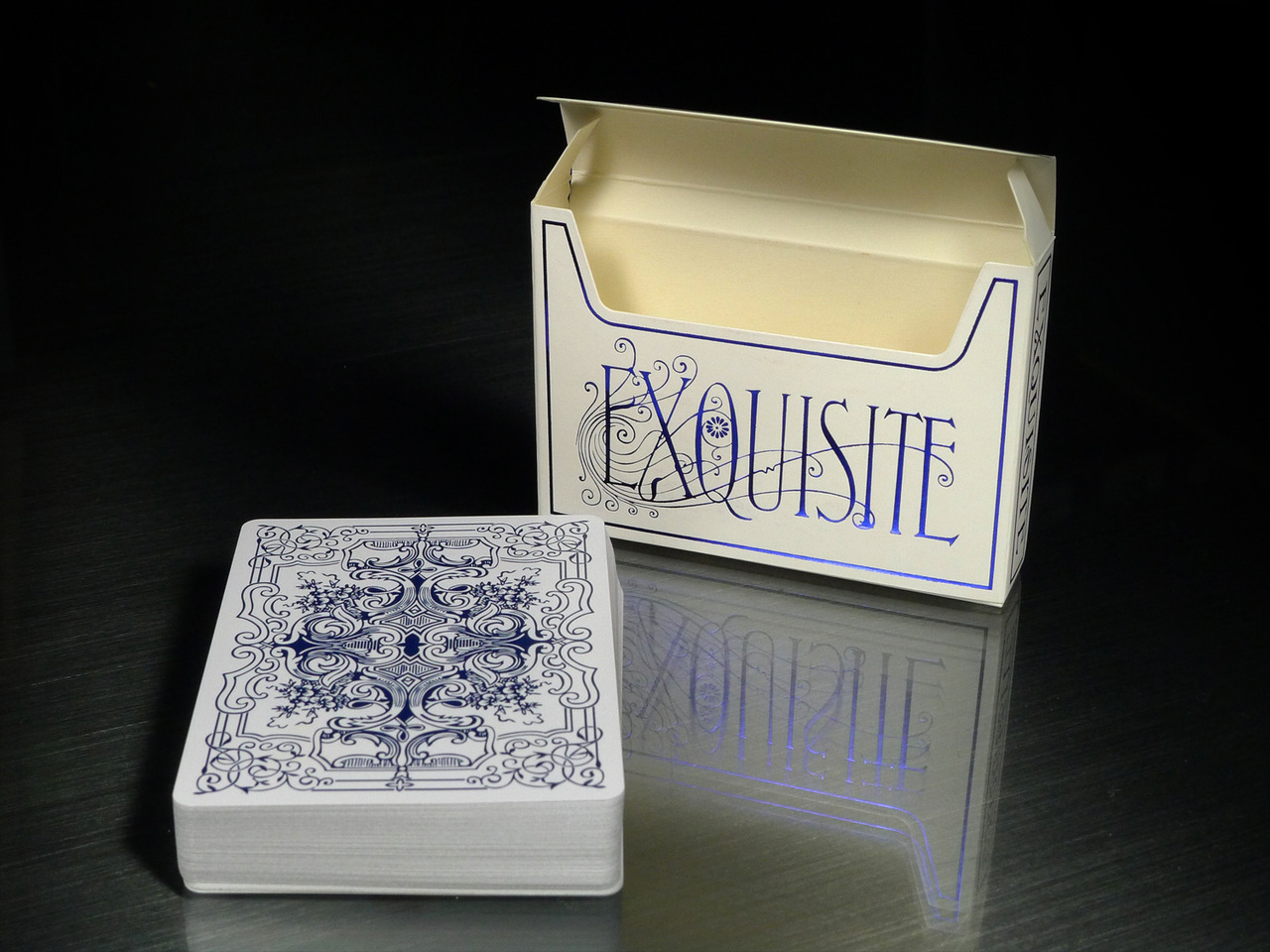 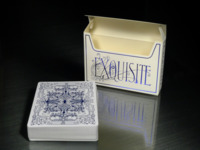 Today, when you order "Exquisite Playing Cards", you'll instantly be emailed a Penguin Magic gift certificate. You can spend it on anything you like at Penguin, just like cash. Just complete your order as normal, and within seconds you'll get an email with your gift certificate.

A blue edition of the Exquisite deck bargain priced for workers!

A few years ago when we started to get the itch to create modern versions of decks from the golden age of playing cards (1860-1920) our first stop was at the great temple for all things related to playing card collecting, Tom and Judy Dawson’s place in Toronto.

Among a number of really cool and rare decks offered to us was this amazing deck called Exquisite. The Dawson’s told us that this deck from about 1895 or so and produced by the Union Playing Card Company of New York was, as far as they knew, a one of kind. No other example had ever turned up anywhere.
The sideways tuck was love at first sight!

The back design that Union used wasn’t as much fun so we decided to replace it with a really beautiful back that had also originally come from the Art Nouveau period.

What we have now is the result of that day with Tom and Judy, Asi Wind’s great eye in picking out the back design and Lawrence Sullivan’s help in getting the factory that made the Legends (a true instant classic) to make our sideways tuck.

We used the same Taipei factory and same paper and coating as the Legends which is a very good start.

Because of our ink choice and coverage the result is that our New Exquisite decks handle the best of any deck we have yet produced. The paper is thin and firm and the coating allows even the unskilled to fan them. Even though the paper, coating and all other factors are the same the way the ink is used makes these cards feel different and better than anything else we’ve done.

The edges of these cards are so perfectly cut that anyone who can even begin to faro cards can faro these either face down or face up. The edge is so perfect and precise that there is no longer any need to talk about traditional cut cards. (Traditional cut refers to our genius friend Richard Turner’s discovery that cards from USPCC that are cut while face down will faro bottom up more easily.)

The printing quality of this factory is superior to anyone else we know. They are such skilled printers that they can get the cards into registration that almost seems impossible. The first thing you will notice is that the white border on the Exquisites is so thin and beautiful that the cards almost look like they are bigger than normal cards! Of course they are not but they do create that illusion. Our borders are less than 2mm at the corners (normal are 5mm or more) and yet if you reverse a card the width of the white border never changes. This is just not possible at any other factory that we know of.