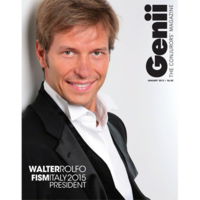 Today, when you order "Genii Magazine - January 2015", you'll instantly be emailed a Penguin Magic gift certificate. You can spend it on anything you like at Penguin, just like cash. Just complete your order as normal, and within seconds you'll get an email with your gift certificate.

Features
The Road to Rimini: Walter Rolfo and FISM 2015 by Max Maven
A Spirit of Fraud An excerpt from the novel by Barry H. Wiley
Robin Williams: Client and Friend by Jim Steinmeyer
Magic in the Classroom by Dale Salwak
Locks Don't Lock Lockman by Dustin Stinett

Columns
Genii Speaks by Richard Kaufman
In Memoriam Bobby Bernard by Brian Sibley
On the Slant by Jon Racherbaumer
Now Performing
Lost Horizons Pinsertion by Max Maven
The Chamber of Secrets Dr. Rohnstein's "The Day-Fly" by John Gaughan
The Genii Session On the Theory of Magic (5): How Original is Originality? by Roberto Giobbi
Panmagium Binary Thought by Jonathan Pendragon
Expert at the Kids' Table Honey, I Blew Up the Magic Show by David Kaye
Magicana by Andi Gladwin
SCASN by Chris Westfall
Pseudo-Glide Monte by Justin Higham
In Clenched Fist by Jonathan Friedman
The Academy of Magical Arts in Genii
Knights at the Magic Castle by Daniel Ulin Magic Castle Performance Schedule

Light From The Lamp
Books Reviewed by David Britland
The Vernon Companion by Michael A. Perovich
Treacherous Impuzzibilities by Jim Steinmeyer
The Sense of Wonder by Robert E. Neale
Charles Dickens Magician by Ian Keable

Videos Reviewed by Dustin Stinett
Totally Whacked by Steve Mayhew
The Rings by Chris Capehart
The False Shuffles and Cuts Project by Liam Montier
Ahead of the Game by Jonathan Levi
The Magic of Suzanne! The Castle Act by Suzanne