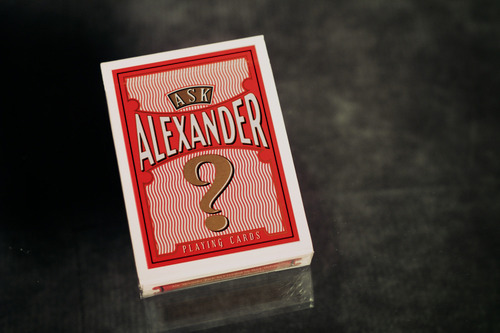 Today, when you order "Ask Alexander Playing Cards", you'll instantly be emailed a Penguin Magic gift certificate. You can spend it on anything you like at Penguin, just like cash. Just complete your order as normal, and within seconds you'll get an email with your gift certificate.

Designed by Mark Stutzman and featuring a number of diabolical subtleties!

A hint at one of Alexander's hidden properties and a little mystery: For those that know Juan Tamariz' Mnemonica, if you turn the deck after the second faro, you can arrange the cards so that, even though the large Alexander head is facing various ways, and throwing off those in the know, small marks on the wings will give you a second one way back pattern! (While we independently invented this, Paul Curry has a similar bit of deception. See his World’s Beyond for some more information).

These are the Ask Alexander playing cards featuring many diabolical additions built in to the deck! Avaolable in both Cambric (embossed) and Ivory (smooth) finishes.

Not a fan. Report this review
Pro Privacy ON (login to see reviewer names) on January 12th, 2017
(This review is for Ask Alexander Playing Cards)
I was unaware that these cards came in Cambric finish until just now, I have the Ivory finish cards. Perhaps because I am more of a collector and a cardist than a magician, I find the Ask Alexander cards cheap. They feel like the novelty cards buy oneveryone gives me when they come back from vacation. Good ol' Streamlines are built heartier and are less expensive.
Did this review help you? Do you want to respond to this review?
Bestsellers