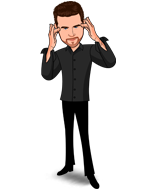 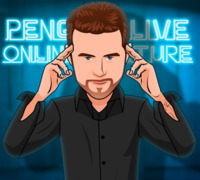 Today, when you order "Chris Bolter LIVE", you'll instantly be emailed a Penguin Magic gift certificate. You can spend it on anything you like at Penguin, just like cash. Just complete your order as normal, and within seconds you'll get an email with your gift certificate.

"Chris is a working pro with well thought out ideas and routines. I am very much looking forward to his lecture.” - Carl Andrews

"If you want to be completely entertained while scared out of your mind, you have to see Chris Bolter's show." - Rick Roth, Outlaw Effects

"Christopher Bolter is one very clever guy. He takes old principles and re-purposes them with new concepts and presentations to create some incredibly strong mental effects. He has a lot of new ideas that many mystery performers will certainly consider adding to their own repertoires." - Marc DeSouza

"Chris and I have been friends since we were teenagers running around terrorizing old people at magic conventions and he was always one of the guys in the group who would be constantly working on some new sleight or idea, non-stop. This discipline and creativeness has carried on as he became a full-time pro and real world worker who will bring something fun and different for everybody at the table. Anybody and everybody will benefit from this lecture. This is not going to be one of those packet trick slinging lectures.” - Dan Sperry, The Anti-Conjurer

The Blindfold Routine: A classic of mentalism for many years. Chris will demonstrate his unique presentation for this incredible routine!

The Magic Square: Another memorable routine performed by Chris with some great new touches and tips. This is one of his most requested routines with repeat clients!

Pegasus Page: An easy-to-do new method that allows you begin and end totally clean! Not to mention the whole routine that accompanies the method.

The Vision Wallet & Peek Thoughts: There have been hundreds of different peek devices released over the last few decades alone. Chris shows his simple, straight to the point preferred version. Along with tips and subtleties on how to get the most from your peek.

Mentalism with Playing Cards: Chris will demonstrate some of his pet routines that incorporate both mentalism and yes… sleight of hand! These include “Unusual Perception” & “Three Card Opener".

The New World Tossed Deck: A new tossed deck you can perform both close up and on stage! This allows your audience to see all of the faces of the deck and still make a free choice!

Thoughts on Q&A: Chris performs his Q&A routine more than any other routine in his repertoire, mainly because it’s requested for almost ALL of his live performances around the world.

Tips During Live Shows: Chris will also show his tips and tricks to use during these routines and during your own live shows!

Bonus: Chris will show you how he sets up and organizes his show. From how to pack, what to bring, and how to make the most without carrying huge trunks into your gig!

Christopher Bolter has been performing non-stop since he was 9 years old. You can find him hopping from college to college all over the country! Chris has performed his unique blend of mentalism and psychological mind reading at over 350 campuses from Los Angeles to London. Also, Chris is a regular guest for corporations such as Apple, Microsoft, Bank of America, Price Waterhouse, Meryl Lynch and Matel. Some of his Hollywood credits include performing for celebrities like Steve Martin, Johnny Depp, Ryan Gosling and Avril Lavigne. Christopher is a favorite among some of the biggest names in show business!

Having performed at The World Famous Magic Castle on multiple occasions, Chris was asked to release some of his methods to the magic & mentalism world! Now is the time! Chris' lecture will take you through some of his pet material which includes classics such as the tossed deck, magic square, pegasus page and more. This is one lecture you don't want to miss!

Purchase the Chris Bolter LIVE product. This is your ticket. Sit back and watch over 2 hours of DVD-quality live streaming magic from the comfort of your own home. It'll be waiting for you in your MyPenguinMagic area.

keep looking... Report this review
Verified buyer Pro Privacy ON (login to see reviewer names) on February 23rd, 2015
Rehash, Not one thing that even got me thinking of something I mite someday possibly want to find a better way to do.

The Blindfold Routine: “Chris will demonstrate his unique presentation.”
Unique presentation? No! This guy nicked John Archer's routine (with No credit given) then demonstrated it with zero showmanship, stage blocking and acting ability. He added absolutely nothing new. If you want to learn this routine go directly to the source and procure a copy of the brilliant “John Archers Blindfold Tips DVD.”

The Magic Square: “it's kind of a predicted number.. But not really…”
Here Chris combines two routines (Divining a serial number and the magic square) and creating a Frankenstein routine! What's the point? Wouldn't it be better to have the Number offered for the Magic Square from a participants mind. Not some contrived adding of numbers? Again “borrowing” from John Archer (with out credit to) on the crib sheet set up for the Magic Square. If you want to learn this routine go directly to the source, Tragic Square found on Educating Archer by John Archer DVD.

Pegasus Page:
A lot of set up for a “mental magic” effect. Over three minutes of instruction and procedure before the moment of astonishment occurs. There are certainly more entertaining and baffling versions being performed.

Chris is not a mentalism visionary, nor a polished performer, however in conclusion I think we can all learn something from Chris, the importance of marketing and self promotion :~)
9 of 13 magicians found this helpful.
Did this review help you? Do you want to respond to this review?

Solid but not inspirational Report this review
Verified buyer Pro Privacy ON (login to see reviewer names) on April 17th, 2015
This can serve as a beginners overview of the classics of mentalism.
There was not a lot to recommend it for anything new, ground-breaking or inspirational... but maybe that's not its strength.

If you want to know "what this mentalism stuff is all about" you might find useful info here... but if you've been in it for a while there's nothing new here.
2 of 2 magicians found this helpful.
Did this review help you? Do you want to respond to this review?

Very Disappointing Report this review
Verified buyer Pro Privacy ON (login to see reviewer names) on February 20th, 2015
Chris Bolter seems like a nice guy - friendly, easy to like as a performer. His mentalism, not so much. Weak routines combined with scant original thinking and few useful insights make this a lecture worth passing up. 'Nuff said.
3 of 5 magicians found this helpful.
Did this review help you? Do you want to respond to this review?

Really good Lecture Report this review
Verified buyer Pro Privacy ON (login to see reviewer names) on February 16th, 2015
I loved this lecture! Especially the Q&A routine tips part. I'm really interested in this kind of topic and Chris has give us a clear explanations of the basics and some important advice. Thanks Penguin and thanks Dan to bring us this high level lecture ;)
2 of 4 magicians found this helpful.
Did this review help you? Do you want to respond to this review?

Great Lecture! Report this review
Verified buyer Pro Privacy ON (login to see reviewer names) on February 21st, 2015
Chris's lecture was great with real world routines that any working pro can use and benefit from. Great job Chris.
1 of 2 magicians found this helpful.
Did this review help you? Do you want to respond to this review?

Solid Lecture for Beginers Report this review
Verified buyer Pro Privacy ON (login to see reviewer names) on February 16th, 2015
Most of what Chris Bolter taught were fundamental mentalism effects with some new handling. However, Chris Bolter gave a solid lecture and worked hard explaining every effect thoroughly. His presentation style is relaxed and he uses humor effectively. He comes across as likable. Unfortunately, I felt I could not use his material as is, but his material did stimulate my thinking. Often, I was able to see ways to carry the ideas one step further to make them punch harder. There is nothing wrong with using well known effects to entertain a lay audience, and I think that is Chris' main goal. I think he accomplishes that goal. If you're new to mentalism, this is a good foundation lecture.
1 of 2 magicians found this helpful.
Did this review help you? 1 comment

Very Good, Practical Lecture Report this review
Verified buyer Pro Privacy ON (login to see reviewer names) on May 26th, 2017
This lecture is full of practical, workable material by a full-time working mentalist.

I especially enjoyed the detailed discussion on Chris' Q&A routine, which is very easy to do (2:01 - 2:30 on the video).
Did this review help you? Do you want to respond to this review?

monkey in the middle Report this review
Verified buyer Pro Privacy ON (login to see reviewer names) on October 28th, 2016
very nice effect....
I use repositioning glue sticks.......allows for more decepition......
but overall a nice effect to use as part of your routine....

obviously can't stand alone
1 of 3 magicians found this helpful.
Did this review help you? Do you want to respond to this review?

Chris Bolter Info Packed! Report this review
Verified buyer Pro Privacy ON (login to see reviewer names) on February 21st, 2015
Chris Bolter's lecture was packed with goodies and solid info! He kept it moving along and didn't get caught up in long discussions that killed time that happens so often.
You know he's a pro as his material is well researched and the methods are simple enough to give the performer plenty of interaction with the audience. I will be using some of these goodies and having fun with them. Definitely one of the better lectures!
1 of 4 magicians found this helpful.
Did this review help you? Do you want to respond to this review?

helpful mentalism Report this review
Verified buyer Pro Privacy ON (login to see reviewer names) on March 3rd, 2015
Chris lecture was very helpful,
there are great idea and strong material, Chris share a lot of stuff with minimal sleights, and his effects are mind-blowing
you must watch his lecture
0 of 2 magicians found this helpful.
Did this review help you? Do you want to respond to this review?
Bestsellers