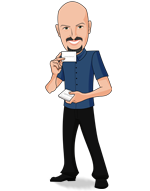 Today, when you order "Chris Philpott LIVE", you'll instantly be emailed a Penguin Magic gift certificate. You can spend it on anything you like at Penguin, just like cash. Just complete your order as normal, and within seconds you'll get an email with your gift certificate.

Add a filmmaker’s eye and a story-teller’s skill to your magic and mentalism! SUPPORT LIVE MAGIC. DOWNLOAD THE FULL LECTURE TODAY.

“To the jaded of us who say ‘It’s all been done,’ or ‘There are no new effects or methods,’ tell that to Chris Philpott.” - Francis Menotti, Magic Magazine

“Absolutely brilliant! Your work stands on itself and when that happens… rare.” – Banachek

“A major new voice in the world of mentalism.” – Mark Elsdon

Chris will be teaching a number of easy-to-perform mentalist and magic effects, including one using the 100th Monkey principle, one from his book, Intimate Mysteries (“One of the best books I’ve EVER owned!” - Stephen Young) and several brand new tricks revealed here for the very first time! There are also three bonus effects and some of his best Magic magazine articles in the downloadable package that comes free with the lecture!

When You’re Out of this World No One Can Hear You Applaud
Chris takes a screenwriter’s eye to one of the classics of magic as if it were a screenplay in bad need of a rewrite.

Photo of the Kids
You know that photo of your kids you keep in your wallet? A spectator is able to describe it with uncanny accuracy without seeing it!

Thought-of Card to a Called-Out Location
What the title says. Super clean and very memorable.

The Liar
A funny, visual take on the liar/truth-teller plot in which the liars literally cannot stand up.

Anchors Aweigh
A playful guessing game about a trivial statistic turns into a startling prediction. Uses a principle many believe has never before been used in magic.

Intuition
A spectator finds a card from a spread, face-down pack the old fashioned way – dowsing!

Your Deepest Fear
Chris takes what he learned writing scripts for two of the great horror directors – Tobe Hooper (Texas Chainsaw Massacre, Poltergeist) and Taka Shimizu (The Grudge) – and pours it all into this effect, a dark, suspenseful homage to horror movies.

Breakthrough
A pen is smashed through a deck. A card rises from the impaled deck. Then the strangest thing happens… An effect Chris marketed a few years ago. (This lecture just paid for itself!)

One Monkey Ahead
A re-thinking of the One Ahead Principle from Chris’s latest release, Babel. Banachek called this effect, “Very, very, very, very (did I say very?) ingenious. Lovely.” And Luca Volpe said, “It opens so many possibilities that it makes you crazy! This is something that will change the way you perform this classic method forever!”

Chris will include everything you need to do “One Monkey Ahead” and material to help you construct “Your Deepest Fear.” On top of that, he’ll include three bonus effects and three of his Magic magazine articles in the download package!

Chris is the creator of The 100th Monkey (“Revolutionary!” –Joe Monti, “Astoundingly good!” – Joshua Jay, “A brand new principle!” – David Penn), and an adviser to David and Leeman on America’s Got Talent and a contributing writer to Magic magazine.

Chris is also an award-winning film and TV screenwriter and director who’s made three feature films and written scripts for producers such as Brad Fischer (Shutter Island), Paul Schiff (Maid in Manhattan) and Taka Ichise (The Grudge).

Chris brings a filmmaker’s eye and a story-teller’s skill to magic, constantly searching for new ways to add drama, emotion, humor and visual interest to his effects. His insights might just change the way you think about magic!

GreatStorytelling Report this review
Verified buyer Pro Privacy ON (login to see reviewer names) on March 9th, 2015
One of the problems with a great deal of magic is what has been called "see the pretty things do what they do." The real question, of course, is why anyone should or would care. Christ Philpott spends a great deal of time showing why writing good scripts makes people care. It was a wonderful time with a truly gifted writer. Highly recommended for those who want to elevate their magic from the adventures of the props to something that spectators will remember for a long time.
4 of 4 magicians found this helpful.
Did this review help you? Do you want to respond to this review?

BRILLIANT and INNOVATIVE!!!!! Report this review
Pro Privacy ON (login to see reviewer names) on October 17th, 2015
By far one of the most extraordinary Lecture I've seen in my life. Funny, brilliant, different, full of inspiring ideas and brand new conceptions of classic effects that I will surely going to use. Thanks Chris Philpott for your precious and unique works!!!
4 of 5 magicians found this helpful.
Did this review help you? Do you want to respond to this review?

A Must-See Report this review
Verified buyer Pro Privacy ON (login to see reviewer names) on March 17th, 2015
Mr. Philpott's lecture is an eye-opening, mind-expanding voyage into mentalism and magic. Chris is one of the smartest, most innovative people in the business, and in my humble opinion, this lecture is grossly underpriced. Don't miss this fantastic session with one of the finest minds around. Period.
4 of 5 magicians found this helpful.
Did this review help you? Do you want to respond to this review?

Amazing Ideas Report this review
Verified buyer Pro Privacy ON (login to see reviewer names) on June 21st, 2015
Chris shared an astounding amount of ideas in this lecture. A lot of ideas that had been worked on to an amazing degree and a few ideas that were (at the time of recording) in various states of progress. He showed how to apply a three act structure to magic and demonstrated a few new takes on his 100th Monkey principle. But wait, THERE'S MORE! Chris provided an amazing PDF after the lecture concluded with a comprehensive time marking for the lecture, all of the scripts he said he'd include during the lecture, along with a few bonuses.
3 of 3 magicians found this helpful.
Did this review help you? Do you want to respond to this review?

Fresh creativity & Terrific Ideas! Report this review
Verified buyer Pro Privacy ON (login to see reviewer names) on April 5th, 2015
I was interested in getting Chris' Intimate Mysteries book but really didn't want to spend the $60. About a week later, I saw that he was scheduled to give a Penguin lecture, so $20 is cheaper than $60 - I bought the lecture. Even though some stuff wasn't as polished as Chris wanted it to be (he tells you that upfront), I think it was fine. I give the lecture a 9 out of 10. I loved it!
2 of 2 magicians found this helpful.
Did this review help you? Do you want to respond to this review?

Review Report this review
Verified buyer Pro Privacy ON (login to see reviewer names) on February 27th, 2015
Chris' work was honest and forthright. He is a gentleman and a hell of a character.
3 of 5 magicians found this helpful.
Did this review help you? Do you want to respond to this review?

WOW! Report this review
Verified buyer Pro Privacy ON (login to see reviewer names) on March 2nd, 2015
Wonderful lecture! Wildly Inspiring, brilliant, generous and lots of fun. So many great ideas shared. The lecture notes are fabulous too!
My favorite Penguin lecture.
This is gold!
1 of 1 magicians found this helpful.
Did this review help you? Do you want to respond to this review?

Extremly inspired Report this review
Verified buyer Pro Privacy ON (login to see reviewer names) on March 12th, 2015
A fantastic lecture, where you as a performer get some invaluably insight in storytelling along with some strong effects.

Criss Phillpot is the inventor of the 100th monkey, witch is in my opinion the most creative and mind boggling mental effect I have seen in the last 20 years. So different from everything else and at the same time totally clean.

Gave me a bunch of new ideas to my show!
1 of 2 magicians found this helpful.
Did this review help you? Do you want to respond to this review?

Great Report this review
Verified buyer Pro Privacy ON (login to see reviewer names) on September 3rd, 2020
What can I say that hasn’t already been said? Chris is without a doubt one of my favorite creators and writers. His skill set is pretty amazing and his personality, customer service, and desire to help others is just the best. Regardless of which effect it is, just buy it. Even if you don't put it in your show, you will be a better performer,

This Lecture is worth your money and your time!
Did this review help you? Do you want to respond to this review?

Chris Philpott Report this review
Verified buyer Pro Privacy ON (login to see reviewer names) on August 11th, 2019
A few updated touches on some older classic tricks. Knows how to script the acts to bring the audience into the stories. I enjoyed his style
Did this review help you? Do you want to respond to this review?
Load more reviews
Bestsellers