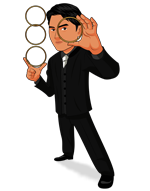 Today, when you order "The Ninja Rings with Shoot Ogawa", you'll instantly be emailed a Penguin Magic gift certificate. You can spend it on anything you like at Penguin, just like cash. Just complete your order as normal, and within seconds you'll get an email with your gift certificate.

When you hear the word Ninja many thoughts enter your mind. Concepts like total precision, unbelievable skill and the ability to do the impossible. You could add to that list advanced planning, choreography and secret weapons. It sounds like an assassination of a feudal lord, and in ancient times it was, but the present day Ninjas are the highest caliber Japanese magicians and now they only assassinate the unsuspecting minds of their audiences.

In 1989 Masahiro Yanagida came to Hollywoods world famous Magic Castle and performed his fabulous Ninja Rings routine for the first time in America. Everyone who witnessed his performance in the legendary close-up gallery could not believe their eyes. The spectators gasped as they saw the small steel rings melt through each other time and time again.

Masahiro fooled many of the the best magicians in the world with his masterpiece. Why? Because he had spent thirteen years perfecting his routine during thousands of performances. His method was traditional but his techniques were revolutionary.

Its now 2003 and Masahiro has passed the mantle to Shoot Ogawa. Shoot has been trained from very early in his youth as a Ninja Magician. It is rare to see such perfection in someone so young. But Shoot has all of the weapons: incredible skill, expert technique, a wonderful personality, professional presentations and focus. To witness Shoots handling of Masahiros Ninja Rings will leave you breathless like all of us so many years ago.

This DVD starts with performances by Masahiro and Keiko. Keiko was the top demonstrator of the Ninja Rings at Wizards Inn, Inc., Masahiros stores. Shoot Ogawa performs the routine before a live audience, then explains each technique in excruciating detail. Nothing is left out.

After each technique has been learned, Shoot does the entire routine again, but this time very slowly. This clearly puts the entire routine into the correct order for the student. At every step of the way, Shoot explains every facet in precise detail and includes many tips for proper performance.

Awesome Report this review
Pro Privacy ON (login to see reviewer names) on November 3rd, 2003
I really, REALLY love this tape. I never really liked the idea of the rings... "whoopie, the rings link, la di da, the rings unlink," but even though I knew the secret before I bought the set, I was still in total awe at his presentation and moves. This is such an awesome and 'worth it' buy. Shoot is an awesome teacher, you'll be a pro in no time.
1 of 1 magicians found this helpful.
Did this review help you? Do you want to respond to this review?

great Report this review
Pro Privacy ON (login to see reviewer names) on June 11th, 2003
I got these less than a week ago and I'm already getting the hang of the most diffucult moves. Shoot Ogawa is a great teacher and the camera angles help on most of the moves. I can't recommend this enough.
1 of 1 magicians found this helpful.
Did this review help you? Do you want to respond to this review?

A compact set of rings Report this review
Pro Privacy ON (login to see reviewer names) on April 7th, 2010
Carry a classic effect in your pocket for walk around and close up. The routine will take some time especially if you want to be as good as Shoot is with the rings, but this is a fun trick and has lots of surprises. I really like the fact that is can fit in your pocket and you can run with it. You will have lots of fun with this one.
Did this review help you? Do you want to respond to this review?

Very Good Routine Report this review
Verified buyer Pro Privacy ON (login to see reviewer names) on August 30th, 2003
There are very good routines on this DVD, good value, a must have if you want do small size linking rings. The routines here are much better than the routines that I often saw performed in the streets in Shanghai.
Did this review help you? Do you want to respond to this review?

Sheens Ninja rings Report this review
Verified buyer Pro Privacy ON (login to see reviewer names) on April 21st, 2003
Shoot Ogawa is an excellent teacher, the whole routine is done in short steps, and excellent quality dvd... Linking rings take a lot of practice but this dvd makes it a lot easier than reading... I highly recommend the dvd and the ninja rings, they are small enough for close up and travel.
Did this review help you? Do you want to respond to this review?

worth it Report this review
Verified buyer Pro Privacy ON (login to see reviewer names) on April 19th, 2003
I always thought linking rings were cheesy and would never have a home in my arsenal, but I have been doing this routine at every show since I first performed it. People go nuts over how impossible it looks, and Shoot Ogawa does a great job at helping you to get to as close to impossible as you can by telling you what you should know about what the spectator sees...this is a very important aspect of magic and it is done well here. I recommend these to anyone looking to break out of their magical mold.
Did this review help you? Do you want to respond to this review?
Bestsellers