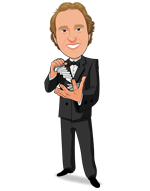 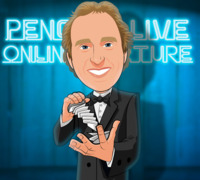 Today, when you order "Alan LIVE", you'll instantly be emailed a Penguin Magic gift certificate. You can spend it on anything you like at Penguin, just like cash. Just complete your order as normal, and within seconds you'll get an email with your gift certificate.

Alfredo Marchese, who performs as Alan, may not be the most recognized name in the world of magic, but we were tipped off with some inside information. So, when Penguin Live happened to catch up with him, we took the opportunity to find out what the buzz was all about. And you'll be glad we did.

Alan is originally from Argentina, now living in Madrid, Spain. Drawn there by the tradition of Spanish card magic... he has a very different take on it. He performs his card magic in a stand-up situation, and in this Penguin Live lecture, he shares a selection of unusual card tricks with fascinating methods.

He begins with a bet and a prediction, and involves the whole audience helping to narrow down an imaginary deck of cards to only one. Although his prediction card in the envelope is off by one, Alan is right on the money as he proves he knew that would be the case.

Then a real deck is cut into four piles, and shuffled by four people, yet each pile is found to have one of the aces on its bottom. It's a clever method.

Next, Alan uses his pocket calendar which has a different card listed for each day. After someone chooses a date and notes the card there... he shows that it is the one card missing from the deck... and, just for good measure, he also has exactly that card in a prediction envelope.

Then, he teaches his way of handling a seldom-seen effect. In his version, any card at all is named, and that card is discovered inside an egg.

Finally, he makes selected cards rise from the deck in increasingly impossible ways, until at last, the entire deck explodes in a fountain. Alan's ingenious set-up for this is portable, allowing you to perform a spectacular card fountain without any assistants or visible mechanisms.

So, if you're looking for some clever ways to make your card magic play for a bigger audience, you'll enjoy the routines you'll find right here.

If you've never been to a magic lecture, there's never been a better time. Sunday, June 28th, at 7:00pm, we're live-streaming Alan Alfredo Marchese LIVE in a spectacular 2-hour interactive online lecture. Watch, ask questions, and learn things you won't find in any book or DVD.

It was okay. Report this review
Verified buyer Pro Privacy ON (login to see reviewer names) on August 15th, 2016
I got this lecture to use some card effects on an upcoming stage act. The effects are pretty good, unfortunately they all require gimicks. Some of the gimicks are easy to obtain and cheap. But I got this for the card in egg effect, which requires an additional $50 apparatus. As a teacher he seems to struggle due to the language barrier, and gives very long winded explanations. But the calender prediction is a very amazing and hard hitting effect that i will be using in my show.

I would rate it as an average lecture I'm slightly disappointed, but i did find one thing to use so that makes it worth it.
1 of 1 magicians found this helpful.
Did this review help you? Do you want to respond to this review?

the entire lecture Report this review
Verified buyer Pro Privacy ON (login to see reviewer names) on July 4th, 2015
His explanations and "helpful hints" were so well presented
Have him again
1 of 1 magicians found this helpful.
Did this review help you? 1 comment

amazing effects Report this review
Verified buyer Pro Privacy ON (login to see reviewer names) on March 4th, 2020
this was one of the most strong effects I ever saw. Original and difficult to improve. the envelope trick is wonderful and the card fountain amazing. I recommend this for all the profesional performers
Did this review help you? Do you want to respond to this review?

Fantastic lecture! Report this review
Verified buyer Pro Privacy ON (login to see reviewer names) on December 11th, 2019
I’ve seen Alan perform most of these pieces live; he knows what works for an audience!
Did this review help you? Do you want to respond to this review?

A Cultural Experience Report this review
Verified buyer Pro Privacy ON (login to see reviewer names) on June 29th, 2015
It is always good to see magic from other cultures. Alan is originally from Argentina, now living in Madrid, Spain. Most of Alan's effects dealt with card magic and relied on gimmicks, rather than extreme slight of hand. Some of the gimmicks can easily be made, but one required electrical technology and appeared difficult to make. His show and card effects are entertaining. Although the methods are old, his presentations are fresh. If you want a cultural experience, then give this a try.
Did this review help you? Do you want to respond to this review?

Outstanding! Report this review
Verified buyer Pro Privacy ON (login to see reviewer names) on June 28th, 2015
An absolutely terrific lecture. Alan's magic is wonderful---and it was great hearing him explain the thinking and philosophy behind his high-impact routines.

Alan performed in The Parlour of Prestidigitation at the Magic Castle last November, and his audiences just loved him.

It's easy to see why.

Highly recommended!
Did this review help you? Do you want to respond to this review?
Bestsellers