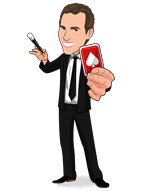 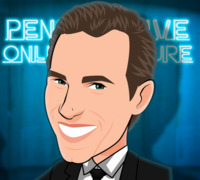 Today, when you order "Jonathan Levit LIVE", you'll instantly be emailed a Penguin Magic gift certificate. You can spend it on anything you like at Penguin, just like cash. Just complete your order as normal, and within seconds you'll get an email with your gift certificate.

“A graduate course in the construction of magic, audience management - and connection - as well as performance art." - Dustin Stinett Genii Magazine

"Applying the concepts he teaches to our own shows will put us all ahead of the game.” - Francis Menotti Magic Magazine

A Force Like No Other This is a psychological force that involves 2 audience members. Jonathan will teach his psychicality and psychology when working with a spectator to give the impression that a selected card is arrived at with no involvement from the magician, while seemingly taking place completely in the spectator’s hands.

Bill Switch Jonathan will describe his handling for a bill switch that allows the bill to truly never leave the audience’s sight.

Mental Miracle This is Jonathan’s opening routine from his close up act in which he divines four cards that are selected in four unique ways.

Over There An impromptu reveal of a selected card that emphasizes the build up of an effect.

Card at Any Number A selected card is positioned at any number called out by the spectator. Combined with performance technique, the impression is made that the cards were never handled by the magician.

Everything Changes This is Jonathan’s signature color changing deck routine in which a selected card, as well as the pack of cards, changes color after being in play for some time during the routine.

In addition, Jonathan will be discussing Performance and Character in the construction and presentation of an act.

Jonathan Levit is an actor, magician, television host and producer with an act you will long remember that encompasses sophisticated humor, mind reading and magic. His career began with his starring role in one of the most highly acclaimed episodes of The X-Files, playing opposite Ricky Jay. He went on to guest star in television shows and films such as Flashword (ABC), The Others (NBC) and The Huntress (USA), among others.

In addition to his acting roles, Jonathan has been a host for The Discovery Channel, The Science Channel, The Biography Channel, Equator HD and the Fine Living Network for shows including Wired Next Fest, Green Wheels, Paranormal U.S.A. and Miracle Hunters. Combining magic and hosting, Jonathan was seen on VH1 as the host and a judge of the celebrity reality magic series, Celebracadabra and appeared on Masters of Illusion (FOX). Jonathan has appeared on the covers of Magic Magazine and GENII Magazine and continues to be a regular performer at the famed Magic Castle in Hollywood, California.

As a magic consultant, he taught Jack Davenport to do magic on Flashforward (ABC), David Duchovny on The X-Files (FOX), Jesse Eisenberg, Dave Franco, and Ayla Fisher in Now You See Me (SUMMIT), and Steve Carell, Alan Arkin, and Olivia Wilde in The Incredible Burt Wonderstone (New Line Cinema).

If you've never been to a magic lecture, there's never been a better time. Sunday, July 26th, at 7:00pm, we're live-streaming Jonathan Levit LIVE in a spectacular 2-hour interactive online lecture. Watch, ask questions, and learn things you won't find in any book or DVD.

Fantastic lecture Report this review
Verified buyer Pro Privacy ON (login to see reviewer names) on August 5th, 2015
I thought this was one of the best penguin lectures I have seen in a really long time.

I am a subscriber, and I'd never seen the magic of Jonathan Levit before this lecture and so I probably would not have purchased it if I wasn't a subscriber, but I'm so glad I watched it!

I'm never going to learn or perform any of the routines he teaches... but the theory and concepts underlying each and every routine were described so clearly and they are applicable to any other piece I perform.
Most of these thoughts were things I'd read before and thought I already understood. This lecture showed me that I'd only touched the surface and didn't thoroughly understand them. Most importantly he explains how to apply these concepts.

Anyone who watches this lecture will come out a more knowledgeable magician.
3 of 3 magicians found this helpful.
Did this review help you? Do you want to respond to this review?

really great! Report this review
Verified buyer Pro Privacy ON (login to see reviewer names) on August 17th, 2015
I was not familiar with Mr. Levit before and after I saw the download I was very impressed!
He showed us a really great lecture!
How he worked with the audience was very impressive and his thinking and his main idea behind the "tricks" is to create effects of a real personal magical moments! Thanks for this Mr.Levit and I hope you will share more of his thoughts!!!
2 of 2 magicians found this helpful.
Did this review help you? Do you want to respond to this review?

Excellent Lecture - creative thinking Report this review
Pro Privacy ON (login to see reviewer names) on March 27th, 2021
Very creative thinking. Jonathan teaches not just how to do some truly powerful effects, but also shares multiple elements of his approach (getting ahead of the game; how to turn a trick into an effect; working with the gifts the audience gives you). Highly recommended.
Did this review help you? Do you want to respond to this review?
Bestsellers