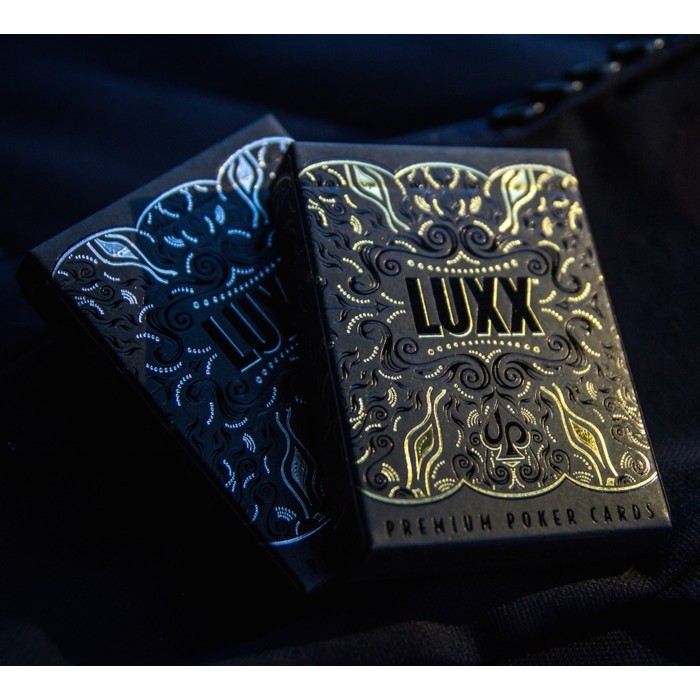 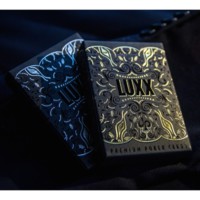 Today, when you order "LUXX v2 Playing Cards: Shadow Edition", you'll instantly be emailed a Penguin Magic gift certificate. You can spend it on anything you like at Penguin, just like cash. Just complete your order as normal, and within seconds you'll get an email with your gift certificate.

Following on from the hugely successful release of the original LUXX Playing Cards in August '14 we're proud to announce the second edition LUXX are here.


The shadow theme for the second edition means we've gone with a darker feel, coupled with lovely metallic inks.

Very functional and classy looking deck Report this review
Pro Privacy ON (login to see reviewer names) on November 25th, 2017
(This review is for LUXX v2 Playing Cards: Shadow Edition)
After the successful release of his first decks for the LUXX Playing Cards sries, Randy Butterfield created a second lot of decks, the LUXX Shadow Edition, which had two versions, Gold and Silver. The Silver deck is basically identical to the Gold deck, with the card faces being the same, and the only difference being to the accents on the card backs (which have a touch of Silver rather than of Gold), and naturally different tuck boxes.

The LUXX Shadow takes its starting point in the original design, but with a darker feel and metallic inks. Black is the dominant colour (replacing the Silver from the First Edition) in order to fit the Shadow theme. The packaging is amongst the most glamorous imaginable. The stylish tuck boxes are made out of matt black card-stock, on which is an intricate design printed with black glossy printing and metallic foil accents. This combination of black and silver looks stunning against the backdrop of matt black, and makes an immediate and thoroughly positive impression. The interior of the tuck boxes have a very smooth, polished, and glossy look, which adds to the look of sophistication.

The card backs have the same design with intricate designs like the original, but now have grey and black tones with silver metallic inks, and the shading is designed to emphasize the visual beauty of spreading and fanning. The only change to the court cards and pip cards from the first edition is that metallic gold and red ink is used for the suits, instead of using different colours for each suit as in the first edition. The court cards are inspired by a classical design, but have all kinds of elaborate touches to add an element of sophistication and style, such as detailed borders, and a design of dots within the pips themselves. The Ace of Spades is every deck's signature card, and with the LUXX Shadow it makes a clear statement of style, with the help of ornate patterns and elaborate line-work.

The colour scheme is also minimalist, to ensure it doesn't detract from the ornamentation of the design, with the spades and clubs court cards depicted in a simple black and gold scheme, and the hearts and diamonds court cards depicted in a simple black and red scheme. The dark colours of the court cards complements the card-backs beautifully. The number cards have an instantly recognizable design, but the stylized pips immediately sets these cards apart from a regular deck. This deck has two extra cards: a Joker, and a poker hand rankings guide.

Like the rest of the LUXX serious, the LUXX Shadow is a beautiful and classy deck that is luxurious in looks, and practical in style, while still priced to be affordable. These are classy decks with a broad appeal, and I highly recommend them for both collectors and card players. They are also available in an even more luxurious edition with gilded edges. - BoardGameGeek reviewer EndersGame
Did this review help you? Do you want to respond to this review?
Bestsellers