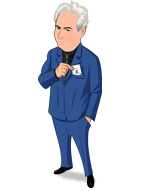 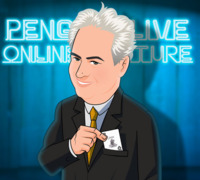 Today, when you order "Rafael Benatar LIVE", you'll instantly be emailed a Penguin Magic gift certificate. You can spend it on anything you like at Penguin, just like cash. Just complete your order as normal, and within seconds you'll get an email with your gift certificate.

This internationally loved magician teaches the card routines and methods that made him famous! SUPPORT LIVE MAGIC. DOWNLOAD THE FULL LECTURE TODAY.

“He possesses that essential factor that separates the outstanding magician from all the others: charm. He will amaze and astonish you but you are so charmed by his personality that you could not possibly resent it.” - Charles Reynolds, GENII

“Rafael Benatar gently and seductively insinuates his enchantments into an audience's collective consciousness. He does not pummel audiences with puzzles or vex them with bewilderments. Instead he gifts them with the wonderments of their own dreams.” - Jon Racherbaumer

“Rafael is not only an excellent performer and entertainer but, even more important, has a thorough understanding of his craft.” - Martin A. Nash

“Rafael has a real flair for presentation and his sleights are smooth as silk. He is well read in card magic, has a fine appearance and a charming personality.” - Michael Skinner

“He does it all better than all the rest.” - Billy McComb

“Rafael Benatar's 'Something Special' was one of the most beautiful and original shows I have ever enjoyed at the world-famous Magic Castle. The combination of gorgeous music and exquisite card magic left the audience spellbound.” - Todd Karr

“Rafael is, without any doubt, a master of that weapon, so difficult to handle, but so greatly efficient, which is timing.” - Arturo de Ascanio

“His work contains an element that is missing in so many contemporary performances - an emotional appeal. Here is a magician who truly applies the theory of magic in his own brand of mystification.” - Jack Birnman

“The subtleties, the delicate touch, and the underlying construction are major advancements. I wish Eddie Marlo was here to see his handling of Devilish Miracle.” - Simon Aronson

“His thinking is superb and his card handling is exquisite.” - Michael Close MAGIC Magazine

Once in a Hundred Years After a spectator shuffles the deck, you spread it face down and he freely touches four cards at different positions. You cleanly strip out the four selections and the spectator agrees that those are the cards he selected. You then hand him the deck and ask him to find his favorite Ace and put it in the middle of the four selected cards, which you hold in a face-down fan. The spectator can’t find any Aces in the deck and you say: “This happens only once in twelve years. You just happen to be passing by” as you turn over the selections to reveal that they are the four Aces.

Crossed Destinies This is Rafael’s take on a rarely performed Vernon trick. Three coins pass in succesion from one hand to the other in a very direct way, with no superfluous moves, counts or displays. A trick that has fooled many experts.

69 A card is selected and lost in the deck. You ask the spectator what his card was and, after a magic gesture to make the card rise, you show the top card, say the Six of Spades. The spectator tells you that you are wrong because his card was the Nine of Spades. You say, “Ah, it’s upside down”. As you rotate the card 180º with its face towards the audience the 6 is seen to visibly turn into the selected 9. You finally say, “And that’s my favorite trick with the Joker” and show that the card has transformed into a Joker.

Countdown Four Kings are laid out in T-Formation. One of them change places with another card to join the main King. The same happens again with another King. When people expect the last King to join the main packet, all the Kings surprisingly appear together in one of the other piles. Michael Skinner regarded this as the best version of the O’Henry Assembly plot he ever saw.

Bookmarks Two decks are shuffled by you and a spectator. You insert a card halfway in a book, as a bookmark, back to the audience, as a prediction. A spectator thinks of a card, finds it in the other deck that he shuffled himself and which is spread on the table. You insert that card, face to the audience, in another book in front of the first. You make another prediction, inserting a second card in the first book, besides your other prediction. You take the spectator’s deck and deal cards face up until he stops you. The next card is inserted, face to the audience, next to the first selection. The book with your prediction is turned over to show that you two predictions match.

Marmalade Poker As you riffle the deck, you insert your right fingers in it and take out four cards, which happen to be the four Kings. Although the Kings are left out, when you do it again, you pull out four Kings once again. Then you decide to mix all the Kings and deal two hands of poker, one for an imaginary opponent, and one for yourself. When the opponent’s cards are turned over, they are found to be four indifferent cards. Then you say, “but I don’t like to win so easy”. You proceed to turn your hand over to show it consists of the four Aces.

Rafael Benatar was born in Caracas, Venezuela and currently lives in Madrid, Spain. He is a professional magician, author and lecturer, and also a renowned performer on the lute, guitar, and several other historical plucked instruments.

His magic performances feature a combination of magic, humor and mystery with an artistic approach, either on stage or at close quarters.

His international reputation has taken him to over three hundred cities of the world. He is one of the most active members of the Escuela Mágica de Madrid and one of the few magicians that performs regularly in all three rooms of the Magic Castle in Hollywood.

His unique style as well and his command of five languages make him the ideal guest for corporate and private events, banquets, and trade shows and theaters.

elegant Report this review
Verified buyer Pro Privacy ON (login to see reviewer names) on March 10th, 2017
Beautiful moves and elegant attitude toward magic. I enjoyed his touch.thank you.
2 of 2 magicians found this helpful.
Did this review help you? Do you want to respond to this review?

Great lecture Report this review
Pro Privacy ON (login to see reviewer names) on July 13th, 2016
(This review is for Rafael Benatar LIVE)
I bought this DVD from Rafael on a Seminar from him, and it's a really nice material, with plenty of cool tricks, and ideas.
2 of 2 magicians found this helpful.
Did this review help you? Do you want to respond to this review?

Fantastic Lecture Report this review
Verified buyer Pro Privacy ON (login to see reviewer names) on September 2nd, 2015
I great lecture from Benatar. Some really neat twist on classic affects, and great teaching! Highly recommended for any card workers.
2 of 2 magicians found this helpful.
Did this review help you? Do you want to respond to this review?

Performance Insights Worth the Price Report this review
Verified buyer Pro Privacy ON (login to see reviewer names) on November 4th, 2015
I love Rafaeil's pieces of magic. However the real magic were his many insights into performance. Tricks are just a tool. You need to be an engaging and fluid performer first and foremost. There was one piece of gold he went over that was more important than any of the effects.
1 of 1 magicians found this helpful.
Did this review help you? Do you want to respond to this review?

Standing Ovation at the Magic Castel Report this review
Verified buyer Pro Privacy ON (login to see reviewer names) on October 19th, 2015
I saw first hand how strong his magic and performance is at the Magic Castle. He got a well deserving standing ovation. Mic drop...
Superb lecture.
1 of 1 magicians found this helpful.
Did this review help you? Do you want to respond to this review?

A Must For Card Guys Report this review
Verified buyer Pro Privacy ON (login to see reviewer names) on August 3rd, 2015
Rafael has a lot of great work with cards, and he shares some really top notch material in this lecture. This is one of the best card lectures I have seen in quite a while.
1 of 1 magicians found this helpful.
Did this review help you? Do you want to respond to this review?

Must have for serious magicians Report this review
Verified buyer Pro Privacy ON (login to see reviewer names) on December 17th, 2018
I have been a fan of Rafael's for about as long as I've known what it means to study magic seriously which probably explains why I'm a fan. This course is a serious study in magic. He gives the audience a lot of insight in to why he does the things that he does. This lecture is basically 4 hours worth of secrets and subtleties that he has acquired over decades worth of study. If you're in to close-up magic, this will change the way you see it and perform it.
Did this review help you? Do you want to respond to this review?

Ok but only good for 3 Stars Report this review
Verified buyer Pro Privacy ON (login to see reviewer names) on August 11th, 2015
It s ok but i won't use anything.
0 of 8 magicians found this helpful.
Did this review help you? Do you want to respond to this review?
Bestsellers