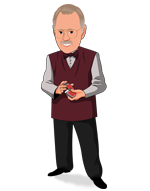 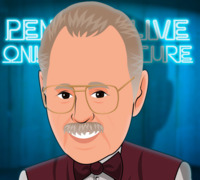 Today, when you order "Bob White LIVE", you'll instantly be emailed a Penguin Magic gift certificate. You can spend it on anything you like at Penguin, just like cash. Just complete your order as normal, and within seconds you'll get an email with your gift certificate.

"There are only a few bona fide master magicians living in the world today, and one of them is Bob White." - Jared Kopf

"In an era where many magicians pay lip service to Erdnase, Bob White continues to be the embodiment of that book's teachings." - Tom Gaudette

The Flash Double A very clean and practical method for doing the double lift. Jamy Ian Swiss said it was the “most natural, unassuming, and convincing” double lift he had ever come across.

The Fingerprint Card Trick An updated handling of the classic sucker effect that happens away from the pack. A simple, direct effect that has been in Bob’s professional repertoire for several decades.

A Simple Coin Vanish A simplified and natural method for vanishing a coin or small object. Based on Charlie Miller’s coin vanish.

The Lie Detector A great version of the lie detector plot performed with cards. This is a perfect trick to complement the Fingerprint Card Trick.

The Sponge Bunnies One of the most powerful tricks in close up magic. Bob has done this trick in every close up performance he has performed for over fifty years. A refined handling- including tips on managing the trick and presentation.

Bob White has been performing magic for over seventy years including over 40 years as a full time professional magician. Bob gave his first day-long seminar in 1996 titled It’s a Matter of Style. This seminar focused on the hallmarks of Bob’s magic: simplicity and uniformity of action. In 2005, he released his first DVD on magic, Practical Card Palming, to critical acclaim. This was followed by highly regarded DVD’s on the Chinese Linking Rings, the Cups and Balls, the Torn and Restored Tissue Paper, the Malini Egg Bag, and Card Magic.

Bob received the 2010 Performing Fellowship from the Academy of Magical Arts for his outstanding contributions to the field of performing magic. During his time in magic, Bob benefited from learning from some of the most legendary names in magic- Dai Vernon, Charlie Miller, Don Alan, and Karrell Fox. Bob is looking forward to sharing his knowledge of the craft with the audience at Penguin Magic.

Great info and even better thinking Report this review
Verified buyer Pro Privacy ON (login to see reviewer names) on September 5th, 2015
Bob's lecture was a treasure trove of great information and solid and engaging material as well.

The card work emphasizes a natural style -- no finger flicking or fancy cuts here, just solid thinking and stuff that doesn't require you to "condition the audience." Bob's emphasis on natural movement and consistency of action carry through to his work in the cups and balls (great information and tips there) the egg bag, and in the clips of Cards to Pocket and his rope routine.

If you want flash and dash, this won't be for you. If you want something to make you think seriously about improving your magic, it's a must have.
3 of 3 magicians found this helpful.
Did this review help you? Do you want to respond to this review?

Living Legend Report this review
Verified buyer Pro Privacy ON (login to see reviewer names) on August 31st, 2015
Mr. White is a talented professional with something to teach everyone. He earned a living for many years performing in all types of venues. He studied with many of the greats (Vernon, Miller, etc.). He knows how to entertain an audience and focus on the important elements of the art. Despite his health getting in his way, he is still full of energy and a complete professional every step of the way. Historians, workers, & hobbyist have something to learn here.
3 of 3 magicians found this helpful.
Did this review help you? Do you want to respond to this review?

An Evening with a Legend Report this review
Verified buyer Pro Privacy ON (login to see reviewer names) on September 14th, 2016
Bob White is one of the last remaining 1st gen conduits to the Vernon/Miller magic oeuvre. He took what he learned directly from those two titans and earned his living from magic for decades in the "real world". As such, anything he puts out is worthy of study, including this--his last public lecture for magicians. In it, he opines of his versions of the classics: everything from the Sponge Bunnies, to Hamman's Twins to his piece de resistance, the cups and balls.

For those unfamiliar with Mr. White, it might be easy to dismiss this lecture as the cranky ramblings of a curmudgeon. (Indeed, those who crave superficial flash and filigree, as well as the "I've seen all that before" crowd need not graze here.) However, while Mr. White is never shy in expressing his strongly-held opinions, there is absolute gold for real performers here. For example, carefully study his superb false transfer carefully--learn it--actually perform it, and then decide whether you got your money's worth. I'll bet you'll answer in the affirmative! The magic here is practical, classic, and timeless.

While hampered a bit by age and a stroke, Bob White is a magic treasure whose work will (and does) live on. We should count ourselves lucky he decided to share himself one last time with us.

(HOT TIP: There is nothing quite like seeing Bob in his prime. His DVD releases were all released prior to his stroke and he is in top form. All are highly recommended)
2 of 2 magicians found this helpful.
Did this review help you? Do you want to respond to this review?

Incredible Report this review
Verified buyer Pro Privacy ON (login to see reviewer names) on September 3rd, 2015
Bob is one of my favorite people in magic. He totally represents the masters of the past and shares great information to help push the art forward.

Bob gives out tips on the egg bag, cups and balls, handling cards properly a coin vanish and how to perform. He tells stories of the past and how to become great... if you listen close.

Basically, this lecture is a "must have." There are very few things out there that I believe are "must haves" and I honestly think Bob's way of thinking about magic should be shared. He CARES about it and cares about others being respectful of the art as well.

Buy anything Bob has published and you will not be disappointed.

Also hugh thanks to Tom and Jordan for helping out. Dan Harlan also did a fantastic job keeping everything on track. To see how far Bob has come is nothing short of inspiring.
2 of 2 magicians found this helpful.
Did this review help you? Do you want to respond to this review?

Bob White Report this review
Verified buyer Pro Privacy ON (login to see reviewer names) on September 3rd, 2015
First Mr White, is a living Legend
and Im happy to see him doing what he does best.
As you know he was
not at 100% but having said that he blows away the competition.
Thank You Mr White and Thank you Penguin Magic !
2 of 2 magicians found this helpful.
Did this review help you? Do you want to respond to this review?

Bob's Lecture Report this review
Verified buyer Pro Privacy ON (login to see reviewer names) on September 1st, 2015
As much as Bob had some great effects and a newer handling for the Fingerprint trick, I really enjoyed the bits of handling and tips. Double lifts, Gemini Count, even the display of a card, was worth it. Guys of his caliber are few and far between.
2 of 2 magicians found this helpful.
Did this review help you? Do you want to respond to this review?

very choppy editing Report this review
Verified buyer Pro Privacy ON (login to see reviewer names) on September 4th, 2015
The very choppy editing (more than to which I am accustomed with the Penguin Live series) makes for a dizzying viewing experience. That said, I enjoyed this as much as I was able to and had to re-construct the lie detector effect from the explanation because the presentation started already in progress. That's one very prominent example. Penguin staff: Can you please fix the editing on this one?
2 of 3 magicians found this helpful.
Did this review help you? Do you want to respond to this review?

What a great guy!!! Report this review
Verified buyer Pro Privacy ON (login to see reviewer names) on December 2nd, 2015
Bob White is a living legend, and I love to hear him straighten out bad card magicians for the most abused sleight in magic: The Double Lift or Two-Card Turnover.

Bob White knows what he speaks, and he tells it like it is.

He teaches some great classic material, and while it will give seasoned card workers little to look at, it is a lovely lecture on some of the classics of card magic. Take it from me, I use his ambitious classic in my close up work, and it works GREAT! It even fools the magicians who think they've seen it all.

His handling of the family rabbits is the best I've seen. best of all, the rabbits VANISH at the end, leaving them with nothing to mess with. I use this in my kid's show.

His trick "She can, He can't" is just a very cheeky piece of magic that has had people in stitches. She can invoke the card just by spelling the card aloud, and he can't do it if his life depended on it! Just a great piece of magic that I'd probably never get to see and learn.

Great stuff from Bob White!!!
1 of 1 magicians found this helpful.
Did this review help you? Do you want to respond to this review?

Bob White Report this review
Verified buyer Pro Privacy ON (login to see reviewer names) on September 8th, 2015
Not one of the better lectures.Physical impairments and opinions offered as pronouncements from on high diminished enjoyment of the lecture. Once again, cudos to Dan for handling him with compassion.
2 of 4 magicians found this helpful.
Did this review help you? Do you want to respond to this review?

Classic Magic to Perfection Report this review
Verified buyer Pro Privacy ON (login to see reviewer names) on September 1st, 2015
Bob White learned from the best and, in the great tradition of magic, he is passing the tourch to a new generation. His focus is on the classics of magic and the principles that underpin them. He stresses the importance of detail and finishing the move. Given his age and health, he did a remarkable job and gave an excellent lecture.
Did this review help you? Do you want to respond to this review?
Load more reviews
Bestsellers