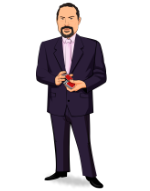 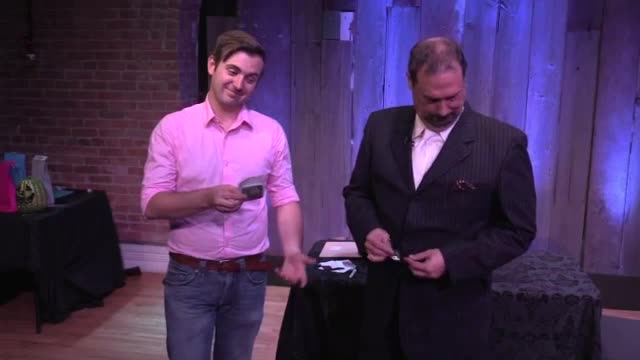 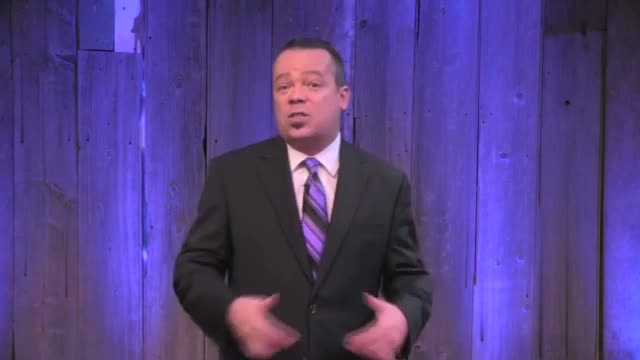 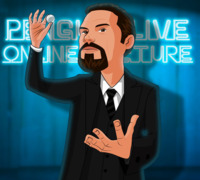 Today, when you order "John Riggs LIVE", you'll instantly be emailed a Penguin Magic gift certificate. You can spend it on anything you like at Penguin, just like cash. Just complete your order as normal, and within seconds you'll get an email with your gift certificate.

Gimme a Number! (Plus Go Postal)

The Living and Dead Butterfly

Visit from a Dead Kid

No Lead in Your Pencil

No Routine for Old Men

At age six, John decided he wanted to be a Wizard when he grew up. He's been studying magic since -- 50 years later! Today he is a professional entertainer, author and strange person. During the 1982 Knoxville World's Fair, he successfully solved the Rubik's Cube while blindfolded. Professor Erno Rubik thought this was the most amazing thing he had ever witnessed.

John was one of the featured entertainers at the 2008 Inaugural Ball, and he is a popular guest on television and radio programs. He has even read palms over the radio! He also enjoys speaking for Civic clubs on a variety of topics including Intuition, Memory, and Weight Reduction. His books, written under the name Jon Saint Germain -- Runic Palmistry, Karmic Palmistry, and A Lover's Guide to Palmistry-- are available in bookstores and from his website. Because of his eclectic knowledge of all things magical and psychic, he has been retained as a consultant for a series of programs for the Learning Channel.

John practices what he preaches. Struggling with a lifelong eating disorder, he applied his techniques to solving the riddle of why a person would consume food when he isn't really hungry. He found answers, and his weight dropped from almost 300 pounds to 200 pounds in a year and a half.

If you've never been to a magic lecture, there's never been a better time. Sunday, October 11th, at 7:00pm, we're live-streaming John Riggs LIVE in a spectacular 2-hour interactive online lecture. Watch, ask questions, and learn things you won't find in any book or DVD.

Pure Genius Mind Reading Secrets Report this review
Verified buyer Pro Privacy ON (login to see reviewer names) on October 12th, 2015
John covers a lot on this fun and enlightening lecture, but there is one method I found particularly valuable. It's what John describes as an impossible to get caught method for secretly reading what your subject has written on a slip of paper, designed specifically for one on one private readings. John tells the story of how two psychic readers each paid him $5,000 to learn this one method, and that it is one of the best ideas he's ever come up with. This one technique made the John Riggs lecture one of the best mind reading purchases I've ever made.
8 of 11 magicians found this helpful.
Did this review help you? Do you want to respond to this review?

GREAT LECTURE!!! Report this review
Verified buyer Pro Privacy ON (login to see reviewer names) on January 2nd, 2016
John Riggs didn't come off like a jerk. He just has a dry sense of humor. Emphasis on the humor because John made me laugh several times.

As for the quality of material, here's a personal testimony:

I made an appearance in two variety shows during the 2015 holidays and used just one of the methods in this lecture for both of them. I combined it with a couple of other principles of mentalism from other sources to create a hybrid MONSTER of an effect.

After the first show I did, using ONLY the above mentioned effect for the entire routine, my friend told me that several ladies in the audience were asking her and others if I had a "special gift".

DURING the second show I did the same routine and, after I read her mind, a female participant freaked out on stage when I tried to shake her hand. She said, "I'm not touching you!" after fleeing the stage. You can't buy publicity like that! She seriously thought that if we shook hands I would know exactly what she was thinking. Hmmm. Wonder what she was thinking. >;)

Once again, I got this response after using the "hybrid monster effect" that I may never have thought of if I hadn't watched this lecture!

So yeah, I'd have to say that despite some of the negative reviews this is a GREAT lecture for Mentalists who know how to create an ambiance and / or how to recognize a powerhouse principle when they see one.

Big thanks to John Riggs!!!
4 of 4 magicians found this helpful.
Did this review help you? 2 comments

John is a required study for today's mentalism Report this review
Verified buyer Pro Privacy ON (login to see reviewer names) on November 8th, 2015
There is a lot of fantastic material here for mentalism. And I stress the "For Mentalism" part. This is character driven work where presenting an amazing program for your audience is key. This is not stuff to mix into your magic show.

This is a lecture I will go back to again and again to reflect on John's thinking.

John is a great thinker and he is presenting solid and useful material. Even the conversation at the end is worth more than the price.
4 of 4 magicians found this helpful.
Did this review help you? Do you want to respond to this review?

Very Good Report this review
Verified buyer Pro Privacy ON (login to see reviewer names) on October 18th, 2015
Top notch mentalism lecture. Made me run out the next day and buy scrabble tiles to use in an effect taught on this lecture using the cleanest, most full proof, easiest billet read Ive ever seen. Very nice.
2 of 2 magicians found this helpful.
Did this review help you? Do you want to respond to this review?

What the H is wrong with John Riggs? Report this review
Verified buyer Pro Privacy ON (login to see reviewer names) on October 12th, 2015
John Riggs is a professional strange person and mentalist who's ideas are maybe just a little bit scary.

The tricks he taught are not only some of the strongest and strangest tricks you can learn, they are some of the most unique and spooky.

I first learned of John Riggs from Psychophysiological thought reading, and I thought- great! I can learn some mentalism. But I got so much more. Riggs thinks like a magician, and bring his years of experience to the table.

The effects are almost too good- good enough to start my own cult!

If you are a mentalist and want to take it to the next level- Well... Go away because I want to keep all these secrets to myself.
3 of 5 magicians found this helpful.
Did this review help you? Do you want to respond to this review?

Great Job Report this review
Verified buyer Pro Privacy ON (login to see reviewer names) on October 20th, 2015
John is a genius. His ideas are great and he doesn't mind showing the finer touches to producing an excellent effect.
2 of 3 magicians found this helpful.
Did this review help you? Do you want to respond to this review?

First Class !!! Report this review
Verified buyer Pro Privacy ON (login to see reviewer names) on October 13th, 2015
I own all videos and books by John Riggs and I waited with impatience to watch his lecture here.
Frankly, I am excited. This is one of the best lectures I've seen at Penguin.
Absolutely great, John !!!
2 of 3 magicians found this helpful.
Did this review help you? Do you want to respond to this review?

A working professional Report this review
Verified buyer Pro Privacy ON (login to see reviewer names) on October 24th, 2015
John Riggs delivers good and solid advice on classic routines and principles of mentalism. Quite often it is just a sentence which gives you an insight in the mind of a working performer who made a career lasting over many years. Time tested methods and presentations for every performing field: you could do these things for your friends and family or for paying audiences of all ages. John Riggs knows the real world workers. Sometimes the lecture seems unpolished or not that well prepared, but to me it it was a good one! I got one routine from it and I`ve heard many (many) good advice on presentation of mentalism and the performer, the mentalist, himself.

If, on the other side, you're looking for "new routines or methods" you won't find them here. Because there are none.

But if you are looking for real world routines, go to Osterlind, Karmilovich or Riggs (for example) and you are able to listen and learn from people who are making a living entertaining paying audiences for many years.
1 of 1 magicians found this helpful.
Did this review help you? Do you want to respond to this review?

John Riggs Report this review
Verified buyer Pro Privacy ON (login to see reviewer names) on October 23rd, 2015
A bit too much hubris for me but otherwise a pretty good magician.
1 of 1 magicians found this helpful.
Did this review help you? Do you want to respond to this review?

Good Mind Reading But Not My Cup of Tea Report this review
Verified buyer Pro Privacy ON (login to see reviewer names) on October 21st, 2015
John’s lecture was fun to watch and I found some of his methods creative and interesting. However, I felt that the presentations of some of the routines seemed unpolished. It appeared to me that the routines presented in the lecture John hadn’t done in some time, maybe this is due to his recent shoulder surgery, but in watching him some effects seemed unpolished and under rehearsed. That being said there are some great ideas in this lecture that the aspiring mentalist could take and make his or her own. If you as a performer enjoy direct mind reading, P.W., Q & A, and an occasional bit of swami work this lecture may be for you.
1 of 2 magicians found this helpful.
Did this review help you? Do you want to respond to this review?
Load more reviews
Bestsellers