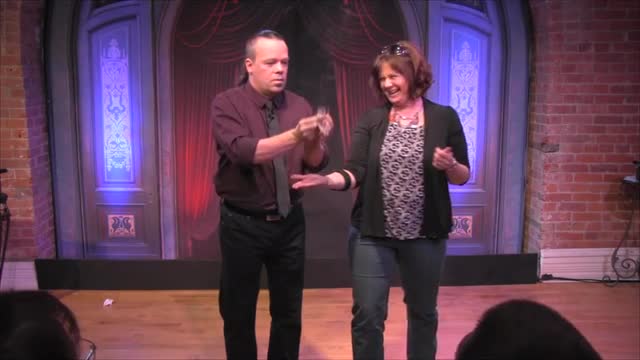 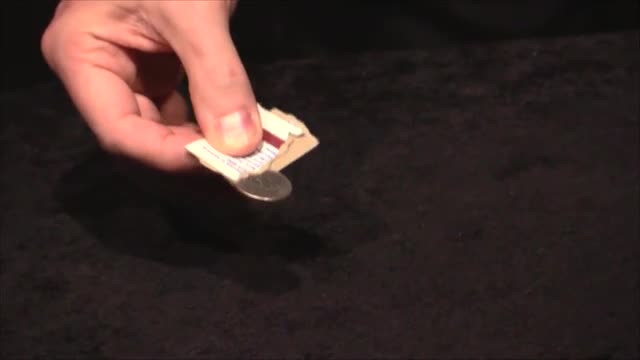 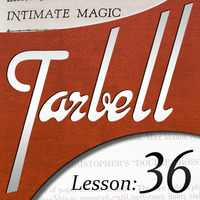 Today, when you order "Tarbell 36: Intimate Magic", you'll instantly be emailed a Penguin Magic gift certificate. You can spend it on anything you like at Penguin, just like cash. Just complete your order as normal, and within seconds you'll get an email with your gift certificate.

Knowledgeable magicians have always been justifiably proud of the ability to perform almost anywhere on a moment's notice.

The basis of this lesson are intimate magic tricks that seem impromptu, using common objects, performed casually in social situations.

Now, I've repurposed them to play nicely in a bigger, structured show, but many still translate to smaller venues and, of course, casual close-up.

For example, I've taken one idea and turned it into a modern spirit slate routine where the letters of a thought-of word appear on business card blanks.

In another, I've totally transformed a method to completely conceal it, allowing a spectator to visualize a chosen card while everyone else sees nothing.

Also, I give you a sweet way to introduce a favorite old bar trick to the latest crowd by making a less familiar item seem even more magical.

And, I milk a simple coin production and for all it's worth, making each successive appearance more impossible, until the last one just can't be believed.

Plus, I show the way I like to perform the quintessential paper match trick, complete with every detail, turning this quickie into a modern masterpiece.

There's also manipulation with wooden matches, a magical give-away you can make for pennies, and a couple of ways to make paper matches behave strangely.

Then, I tackle a trick that hasn't been in fashion for many years by giving you an alternate, impromptu version that's worth remembering.

And I make another substitution, by taking a cute trick out of the bar... doubling its impact... and leaving a spectator with real change.

I also show you a natural-looking way, with empty hands, to instantly clue-in one of your helpers to reveal a card, chosen by another.

Next, with a new presentation, a favorite (little-known) impromptu trick becomes a demonstration of instantaneous travel through the fabric of space-time.

And, I cover various tricky ways to put a ring onto a rope without apparently using the ends, and a quick impromptu bit with a Sharpie cap...

Plus, a neat variation on the torn and restored napkin where... First, the tears move from one piece to another, then everything comes together in the end.

Then, a puzzling color identification effect becomes my favorite comedy mind-reading routine for kids using only a few ordinary crayons.

And we finish off this lesson with a bunch of knots that appear, vanish, double, and do the kinds of unexpected stuff that ordinary rope shouldn't.

This lesson is packed with the widest variety of tricks to date, and there are quite a few gems among them. It's time to have fun so let's get started.

Tarbell 36 Report this review
Verified buyer Pro Privacy ON (login to see reviewer names) on September 19th, 2015
Dan takes these classic close-up routines and gives them new life. Some are given new presentations others had their props undated and their presentation polished. Dan’s commentary on these effects is great to hear. In total this lessons packs in over 20 effects/ideas/stunts. The following are just some of the gems in this lesson:

Tarbell's Sugar Mark: A packet of sugar turns into a cube. The cube is parked and that mark jumps on to the palm of the volunteer’s hand, then the back of the hands and then all over their body.
Christopher's Match Book and Coin: A coin is produced from a paper match book (as seen above in the demo). This looks more and more impossible and at the end your spectators can examine all four coins.
Christopher's Match Stickler: Matches in a book are introduced, one is removed and burnt. It cleanly vanishes and travels back to the match book where it is found to be reattached to the book and still burnt. Dan turns this into a nice stand-up effect and his presentations was fun to watch.t
Tavern Trickery (with Coin): A card is revealed on a coin previously examined by the audience.
Joe Berg's Criss-Cross Paper Napkin: A napkin torn into four segments. Two segments are torn and rolled up while, other two are just gathered up. The torn and untorn segments switch places while the spectators hold on to the torn pieces. The torn pieces then restore themselves. Finally, both segment fuse back together into on complete napkin.

All in all this lesson gives a nice overview of several class effects. However, for those who have read classic magic books of have been in magic for some time they may already know some of these effects. It is a great video and all effects are presented in the professional and entertaining way. Even if you don’t pick up a new effect here you will enjoy watching Dan work.
1 of 1 magicians found this helpful.
Did this review help you? Do you want to respond to this review?

Good but not the best Tarbell Report this review
Verified buyer Pro Privacy ON (login to see reviewer names) on September 3rd, 2015
Good for the close up magician. The effects aren't that hard to perform but they do not hit very hard either. That being said, it is still worth a purchase.
1 of 1 magicians found this helpful.
Did this review help you? Do you want to respond to this review?

Top 5 Tarbell Yet Report this review
Verified buyer Pro Privacy ON (login to see reviewer names) on August 29th, 2015
It is amazing I just started working in a restaurant and I am atleast going to use 2 to 3 tricks. Dan Harlan did good on this one
1 of 1 magicians found this helpful.
Did this review help you? Do you want to respond to this review?

Oldies but GOODIES Report this review
Verified buyer Pro Privacy ON (login to see reviewer names) on September 2nd, 2015
A lot of old chestnuts. (Some that audiences may know.) Nothing I felt I could use...disappointed. UNTIL the end. Then a great knot routine and one of my favorites: the Bachelor's Needle. I've been doing the Bachelor's Needle for 25 years and my handling improved by watching Dan Harlan do it. Get this. You'll learn tricks you should know or learn improved handling a of what you already know. Solid material that's stood the test of time.
1 of 2 magicians found this helpful.
Did this review help you? Do you want to respond to this review?

A good variety for someone trying to add some things into their routine.
Did this review help you? Do you want to respond to this review?

Tarbell 36 Report this review
Verified buyer Pro Privacy ON (login to see reviewer names) on December 5th, 2019
Wonderful video, this video is user friendly for those new to magic.
Did this review help you? Do you want to respond to this review?

vest and botton Report this review
Verified buyer Pro Privacy ON (login to see reviewer names) on November 29th, 2016
the price of this was worth it just to learn the vest and botton trick did it at my last dhow for a group of 7-10 year olds they went crazy when I did this to one of there moms couldn't beleave I looked up and there she was wearing a stone around her neck . dan is the best teacher theres only one other that is as good but wont say his name ill keep buying the Tarbell ledsons as long as dan teaches them own about 12 of them so far
Did this review help you? Do you want to respond to this review?

Best money spent here! Report this review
Verified buyer Pro Privacy ON (login to see reviewer names) on November 8th, 2015
Lets see this is by far the best 9.99 that anyone can spend on magic, each lesson is pure gold. Dan is great and the series is filled with great magic from the past! Dan dusts them off and brings them modern age.
Did this review help you? Do you want to respond to this review?

Well Explained Report this review
Verified buyer Pro Privacy ON (login to see reviewer names) on September 3rd, 2015
This lecture has a lot of material. The material is basic. There is nothing new, but all the effects are well explained.
Did this review help you? Do you want to respond to this review?

Tarbell 36: Intimate Magic Report this review
Verified buyer Pro Privacy ON (login to see reviewer names) on April 20th, 2016
WOW!
0 of 1 magicians found this helpful.
Did this review help you? Do you want to respond to this review?
Bestsellers