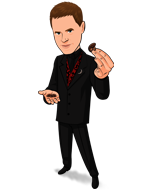 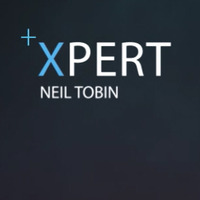 Today, when you order "Xpert by Neil Tobin", you'll instantly be emailed a Penguin Magic gift certificate. You can spend it on anything you like at Penguin, just like cash. Just complete your order as normal, and within seconds you'll get an email with your gift certificate.

One of mentalism's best kept secrets. Now for the first time, learn from the genius who invented it, plus see live performances. NOW SHIPPING. HIGHLY RECOMMENDED.

For 10 years, Xpert has been one of mentalism's best kept secrets.

Now for the first time, discover the utility device, one that's already being used by performing mentalists and magicians who appreciate its understated power and seemingly limitless possibilities. Utilizing the subtle principle illuminated in Kenton Knepper's manuscript, X, and launching it into the next dimension, the Xpert makes possible a wide variety of miraculously direct and virtually sleight-free effects.

You'll be blown away by both its limitless power, and its simplicity. The very best kind of mentalism tool.

Dream Card
Show that a freely selected card (really) is the one card you had previously dreamed about. (Based on an effect by Terri Rogers in Wipe Out.)

Coin Bend
Make a single coin from a borrowed handful of change bend while being held by its owner.

Vampire Slayer
Your participant's power as a slayer is tested by trying to locate the one card in the pack representing a vampire. The vampire unfortunately gets away, but not before leaving the participant with a spooky souvenir.

Contagious
A strange deck of cards acts like a virus. First it replicates another deck all the way down to a selected, reversed card—then it wipes the original deck completely blank in a surprising climax. (Created with Joe Wach)

3 Coin Monte
In this streamlined three-phase monte routine, your participant seeks the one marked coin out of three to win all the money on the table. Of course, he never has a chance, but he's given the coin as a reminder of his gambling adventure. (Created with Adam McDivitt)

Out of Body
A borrowed coin leaves a borrowed handful of change to end up in another participant's pocket (or in virtually any other seemingly impossible location).

Epic
This fooling variation of Hen Fetsch's Mental Epic uses three numbered postcards containing three correct predictions, and everything can be left with the audience afterward.

Memorandum
In this apparent demonstration of mind control, three participants are individually shown the same number (supplied by a fourth participant) but all three see it in three bewilderingly different ways. (Variation on the effect by Joshua Quinn in Paralies)

Make Your Own Xpert
Hands-on tutorial to ensure you will never be without this invaluable device.

BUY this - you will USE it. Report this review
Pro Privacy ON (login to see reviewer names) on October 22nd, 2015
Xpert is something I have used for years. It originally came out a number of years ago in a limited capacity by Neil Tobin and then was hard to obtain. It has now been released in a more thorough form with more information on how to use this incredible device. Buy this.

I recall using the bent coin routine with Xpert at a huge high school party I was hired to perform at. I was about ready to leave after a couple of hours walk around magic and a large group (approximately 20 students) asked me to do one more thing before I left. I borrowed some pocket change, had a coin marked, and dropped the marked coin and pocket change in a student’s hand. I asked him if he could feel some heat and possibly even some movement to which he replied yes. I picked up my bag and told him as soon as I walked out the door to slowly open his hand. As I walked out the door I heard screams, laughing, and shouts of “no f#&’n way!” coming from about 20 people who had been watching this last feat. That is the strength of Xpert.

Having actually USED Xpert for years I can strongly recommend this new expanded release.
15 of 15 magicians found this helpful.
Did this review help you? Do you want to respond to this review?

READ THIS!!!!!!!!! Report this review
Pro Privacy ON (login to see reviewer names) on January 12th, 2007
(This review is for The Xpert by Neil Tobin)
I have bought things like the STS, spun, Torn, two dollar window, showoff with cards, invisible deck, and lots more but THE XPERT is the best product I have bought from Penguin. It is like a thumb tip it can be used for many things and you can make up your own routines. I love it and reccomend it to everyone!!!
8 of 8 magicians found this helpful.
Did this review help you? Do you want to respond to this review?

The Xpert Report this review
Verified buyer Pro Privacy ON (login to see reviewer names) on September 28th, 2003
(This review is for The Xpert by Neil Tobin)
Neil Tobin's Magic Trick THE XPERT.

OK so here it is...
I like it!!!
It's Clever!
An old idea combined with an up-to-date state of the art apparatus.
(editorial deletion to protect secret)
As for the routines,
Yes, I have experimented with them.
I like them.
The first one is cool and very effective. (Out-of-Body XPERT)
(editorial deletion to protect secret)
Just do exactly as he suggest in the illustrations with the fingers and thumb positions.
Out-of-Body XPERT is a GREAT Astonishing and mind blowing effect.
This effect alone is well worth the price of THE XPERT.
But amazingly the Xpert comes with FOUR Original effects and also you can make up some of your own.

The XPERT Epic
Makes it easier and a little more impromptu to perform rather than carrying around my mental boards and mind prediction slates which I don't like to even use anymore do to the fact that they are non examinable. So this routine is very much welcomed.

I like the Vampire Hunter too.
I've seen Paul Harris perform a trick similar to this effect.
And, I've Seen a Magician named Jared do something like this as well.
THE XPERT just makes it that much easier to perform and pull off with confidence.

I hope you find value in my review.
7 of 7 magicians found this helpful.
Did this review help you? 1 comment

MYSTERIOUS!!! Report this review
Verified buyer Pro Privacy ON (login to see reviewer names) on August 8th, 2003
(This review is for The Xpert by Neil Tobin)
First off, I could only give it 4 stars because right off the bat people should know that you can't use The Xpert with Bicycle or Bee Brand Decks. It's unfortunate, because the way I feel about this product is THROUGH THE ROOF! It really is ingenious. It is very VERY easy to use. For those who like the Scotch and Soda effect, you can do it better. Do it with borrowed coins. ANY coins. Read the description for "Xpert Out of Body" Routine. For those who love the Invisible Deck, Re-Read the description for "The X-ed Card" Routine. Imagine using a borrowed deck. One card is marked... the card you predicted! No forces, Any card... Millions of routines possible. Do your research and you'll be more and more intrigued the more you find out what people have to say about it. Don't pass this up!!!
6 of 6 magicians found this helpful.
Did this review help you? 6 comments

Every mentalist needs this Report this review
Verified buyer Pro Privacy ON (login to see reviewer names) on June 9th, 2016
I'm a purist when it comes to mentalism props and utilities. If it doesn't look ordinary or natural, then it's going to give off a magicky vibe, and then I'm not doing mentalism; I'd be doing a magic trick. Xpert is one of those rare things that looks exactly like what it's supposed to be. It will arouse zero suspicion by itself, and for those unfamiliar with how it works, let me assure you that while it is about the simplist thing possible, nobody expects it or even thinks about it. In order words, use it effectively and spectators will go down the wrong path futilely searching for the explanation. It will blow minds. While I'd seen this principle before, Neil brilliantly elevates it to the stratosphere.

I work with words and my mind and don't carry around much of anything. I do carry the Xpert. That's the highest praise I can give it.
4 of 4 magicians found this helpful.
Did this review help you? Do you want to respond to this review?

I like this one. Report this review
Verified buyer Pro Privacy ON (login to see reviewer names) on August 26th, 2003
(This review is for The Xpert by Neil Tobin)
I must say, I really enjoy this. It's so EASY yet so hard hitting.

At first I was like: "HUH, this is it? This seems so simple to fool anyone" But MAN does it get great reactions, people just FREAK out!

I use this everywhere I can now. It's great.
4 of 4 magicians found this helpful.
Did this review help you? Do you want to respond to this review?

Xpert Magic Report this review
Verified buyer Pro Privacy ON (login to see reviewer names) on August 20th, 2003
(This review is for The Xpert by Neil Tobin)
Read the four routines outlined in the product description. Do they sound like effects you can see yourself performing? If so, hit the 'Add to Shopping Cart' button, and wait patiently by your mailbox. The decision in this one is that easy! I am not one to jump on the bandwagon for the latest flavor of the month trick, but this piqued my interest because people were raving about its uniqueness and versatility. This is one of the best magic purchases I have made all year. It is not a one trick pony, the applications are only limited by your imagination.
3 of 4 magicians found this helpful.
Did this review help you? Do you want to respond to this review?

The Xpert Report this review
Verified buyer Pro Privacy ON (login to see reviewer names) on January 3rd, 2016
The expert, although built on a simple concept, is most definitely a virtual Swiss Army Knife of magic and mental possibilities as stated in the trailer. This simple but amazing gimmick will allow you do do some amazing mentalism and magic effects, and it will allow you to easily come up with some effects of your own. Whether you are a beginner or have been doing magic for years, you should definitely invest in the Xpert.
2 of 2 magicians found this helpful.
Did this review help you? 1 comment

Simple but effective Report this review
Verified buyer Pro Privacy ON (login to see reviewer names) on December 31st, 2015
The magic in this trick is in the routines you will learn. The gimmick seems disappointing at first but don't be fooled. It delivers a big kick. I highly recorded it
2 of 3 magicians found this helpful.
Did this review help you? 1 comment

Xpert Report this review
Verified buyer Pro Privacy ON (login to see reviewer names) on August 1st, 2017
I bought this as a balancing item in the 5 for $99 offer but it turns out ot is easily the best item of all.The tutorial is brilliant and full of ideas , enough for a complete show in itself..I just can not rate this item highly enough.
1 of 1 magicians found this helpful.
Did this review help you? 1 comment
Load more reviews
Bestsellers