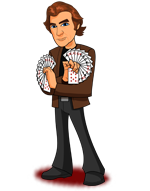 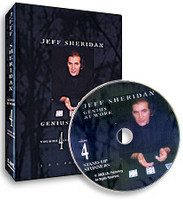 Today, when you order "Jeff Sheridan Genius At Work: Volume 4 - Stand-Up Stunners", you'll instantly be emailed a Penguin Magic gift certificate. You can spend it on anything you like at Penguin, just like cash. Just complete your order as normal, and within seconds you'll get an email with your gift certificate.

On this volume, Jeff Sheridan shares some amazing effects suitable for parlor and platform. This is innovative, cutting-edge magic that will excite even the most jaded audiences.

Cheek To Cheek - A packet of cards is repeatedly mixed up in face-up/face-down fashion yet rights itself - and the fact that it's repeated over and over again is a guaranteed fooler!

Dream Autograph - A selected, signed card turns out to not only match the performer's prediction - which has a different back color and is signed by the performer on the back - but is found to actually be the same card!

Thimbles - A cute manipulative interlude that can stand alone or be used to supplement a thimble routine you already perform.

Pipe Production - A full-sized tobacco pipe is produced from a silk, vanished into thin air and then reproduced under the fairest of circumstances.

Vanishing and Appearing Ladies Fan - Watch closely or you'll miss it! A fan is shown and opened. The performer closes it and it vanishes instantly. Just as suddenly, it's back again!

Silk Through Silk - Two silks are shown. One is formed into a bag and the other is placed inside and then visibly pulled through the bottom of the bag. After the penetration, the other silk is shown to be completely solid.

Torn And Restored Card - A selected card is torn into four pieces, which are then inserted into the deck. With no false moves, the deck is ribbon spread to show the card face up in the middle - and completely restored!

Triple Prediction - An impromptu version of a classic in mentalism. The performer correctly predicts the thoughts of three random spectators.

Wrigley Prediction - A new use for Mental Epic as the performer correctly predicts the spectator's preference in the ordering of three objects.

Love it so much ! Report this review
Pro Privacy ON (login to see reviewer names) on June 25th, 2019
Watching jeff take a silk thru another silk is amazing.i remember first seeing this and thinking .wow this guy is a true thinker in magic.and you can tell as he is doing routines.how much passion he has for magic
Did this review help you? Do you want to respond to this review?
Bestsellers