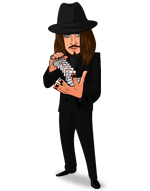 Today, when you order "Deep Shadows By Dee Christopher", you'll instantly be emailed a Penguin Magic gift certificate. You can spend it on anything you like at Penguin, just like cash. Just complete your order as normal, and within seconds you'll get an email with your gift certificate.

Deep Shadows is a collection of techniques, tools and effects discovered by TV mentalist Dee Christopher over 10 years of study, creativity and performance as a professional magician and mind reader.

Featuring a foreword by Daniel Madison and an incredible expanse of magic, mentalism, routines and utilities spread across more than 250 pages in ebook format, Deep Shadows is a rare insight into the mind and repertoire of a working mentalist.

Within the leaves of this tome, you will learn the following:

• How to construct amazing gimmicks that will take your mentalism and magic
to the next level.

• How to bend silverware with just your words.

• How to predict choices made in several different ways, close up and on stage.

• How to stop a spectator’s watch without touching them or having to wear heavy
magnets.

• How to secretly code information to a confederate in any language.

• How to turn a normal looking notepad into a weapon of mass deception by adding
switching and peeking capabilities.

• How to visually twist your veins into thought-of letters.

• How to perform the classic haunted key effect with a normal key
in your spectator’s hand.

AND MUCH MORE. (Full contents below)

As well as all of this amazing material, Dee divulges his thinking on many different subjects including how to learn verbal deception, how to structure your acts, and many other subjects vital to the performing mentalist.

Whether you're just branching out into mentalism, or you're a seasoned mentalist looking for a greater insight into your craft, you'll find what you need in Deep Shadows.

-BROKEN WINGS: A gimmicked pad with which you can force information, peek information, create automatic writing effects and much, MUCH more! (Just google for the reviews.)

-LEGION: An expandable concept with cards that needs to be set up only once and can create completely hands off forces, hallucination effects and more!

-CRONOS: A full locked box prediction system that also allows you to perform an incredible feat of psychokinesis!

-CAST: An amazing booktest gimmick that fits in your wallet and is completely invisible in plain sight!

- inDeck: A brilliant billet index that can be built into a deck of cards, or a stack of index cards, depending on your preference. Very easy to use, very easy to expand.

-SIX:SIX: A unique forcing technique based on a very old magic effect.

-EX: Prove that you know what item would be named before it is.

-LOKI: Determine which poker chip resides in which of your Spectator's pockets with no peeking and no gimmicks.

-TURNOVER 23: Place down an odd backed prediction of a named card and be right every time!

-MORSE: A spectator as mind-reader effect.

-SYN: One coin bends visually as the other bends in a spectator's hand. They will admit to feeling it bend EVERY TIME.

-MIRROR: Is it possible to predict a spectator's shuffle? It is now.

-MACHINE: An incredible demonstration of automatic writing. One spectator thinks of a word and the other writes it without knowing how!

-THE NEW BLACK: A thought of word is written on a thought of ESP card, sat in an envelope in full view!

-DICHOTOMY: FINALLY, an Out of This World that can be done effectively in the hands!

-SEVENS: A spectator pushes an envelope freely into the spectator shuffled deck. The card in the envelope matches the card they find in the deck!

-ASHES: Any named suit burns. (use ring/coin and battery idea to heat the env/cards in their hand.)

-TECHNOKINESIS: Push a button on a Blackberry phone with your aura.

-THE TOUCH: A two person coding concept that will work everywhere and anywhere, under any conditions.

-SCAR: Visually HEAL a scar on your hand!

-EPOCH: Know the date and value on any coin handed to you from within your closed fists.

-VANITY: The veins in the back of your hand visually twist themselves into thought of initials!

- Schrodinger's Deck: A great method and presentational angle for the light and heavy deck effect. A spectator loses the ability to lift a deck of cards off your hand.

- The Devil's Key: A method to recreate the classic 'Haunted Key' effect, but in your spectator's hands! The key eerily turns over with no threads attached.

- Falling Coins: Influence the toss of three spectators' coins from their own pocket. You never touch a thing, yet you can prove that you have influence over the fall. Reminiscent of the classic 'Falling Dice' test for psychokinetic ability. This amazing method can also be applied to many other applications, a few of which are discussed.

- Sight Three: A variation of Dee's original "Sight" effect. A notebook is passed around the audience and everyone is asked to write a horror movie of their choice on one of the pages. A movie per page. After about 50 movies have been written, a final spectator merely thinks of one of these as the mentalist starts to reveal what they're thinking. No page number forcing, you never even look in the book.

- Insanewave: A deck of ESP cards is shuffled face up by the spectator and the faces examined. There are five of each symbol. The spectator calls out a symbol and the performer spreads the deck face down on the table. There are five cards with a different colour back design distributed through the deck. These are turned over and shown to be the five cards of the named symbol.

- Rush: A close up russian roulette style effect with lighters. Out of four lighters, the spectator chooses the three which do not light. Advice on how this could be played close up or on stage is offered. No equivoque, this is a brand new principle in mentalism.

- iSo: Completely isolated coin bend. A coin is shown to be straight in a glass, with a swirl, it bends.

- Currency: Predict the bill to be chosen AND the serial number!

- After-Dark: A direct, organic, mentalism routine. Two coins are brought out, or borrowed. You explain that you are going to place your hands behind your back and bring one of the coins out in a fist. The spectator is going to play mind reader and guess which coin you have in your hand. You can then predict or mind read which coin they hold in their fist!

-WHY I NEVER HAVE A COIN SIGNED

• Tell the punchline - An essay on the structure of a metal bending act or routine.

• The use of verbal deception - Dee offers his advice on learning any kind of deceptive scripting or ploy.

• The basics - An overview of popular and lesser known bends and physical technique.

• The use of verbal deception - Dee offers his advice on learning any kind of deceptive scripting or ploy.

• The ‘Syn’ ploy - The now classic technique first divulged on Dee's "Metal" DVD. Here you get the full work never before published or even seen by anyone but Dee's closest friends. This includes several variations and extra techniques and thoughts.

• Sean McCarthy’s take on Syn - Sean McCarthy gives some additions with the Syn ploy and Dee offers his extra advice and techniques.

• The ‘Imagine If’ ploy - A way to have a spectator fully describe their experience in real time as a coin or fork bends in their hand. This is a huge leap forward and works every single time.

• The reversal technique - Create hallucinations as you explain to your audience how they too can bend metal.

• Tell the punchline - An essay on the structure of a metal bending act or routine.