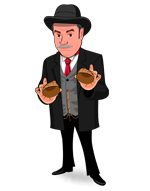 Today, when you order "Comedy Four Ring Routine By Pop Haydn", you'll instantly be emailed a Penguin Magic gift certificate. You can spend it on anything you like at Penguin, just like cash. Just complete your order as normal, and within seconds you'll get an email with your gift certificate.

This is the downloadable video of Pop Haydn's Four Ring Routine. It is over an hour of instruction in the handling and presentation of this classic comedy routine in mp4 format, 371 megs.

This video features a live performance at the Magic Castle of Pop Haydn's signature routine, and step by step instructions on how to perform and present this wonderful piece.

Pop Haydn is a six-time award winner at the Magic Castle.

This is an all-new remake of his earlier DVD, Whit Haydn's Comedy Four Ring Routine. The routine is the same, but the presentation and instruction is in his new character, Pop Haydn.

Pop Haydn's Four Ring Routine was created in the 1960's when he was a street performer in New York City. It is one of the most commercial, convincing and entertaining versions of this classic effect ever created, and plays well in any type of performing situation.

Dai Vernon, the Professor, said that this routine had "...the most original comedy premise" he had seen in magic "in over thirty years!"

In the routine, a spectator from the audience is invited up on stage to learn the world's "oldest magic trick." The spectator quickly becomes the star of the performance as they seem to turn the tables on the magician and their two rings apparently link in their own hands, and then they try to keep up with the magician as he "teaches" them how to unlink and then link them again.

The audience is in hysterics as the rings seem to link in every possible combination, and then melt apart "like rings of smoke," all the while the spectator desperately tries to keep up.

It is not a difficult routine to learn and perform, and it plays in the tightest places completely surrounded, as well as on the biggest stages. Pop explains every detail of performance and handling.

"...What it illustrates to those who are seeing it for the first time is that Haydn developed what is perhaps the single most audience-pleasing, interactive, and commercial Linking Ring routine in the modern era.”

“I have performed a personalized version of this routine for 15 years and can speak to its impact. Its comedic impact and theatrical construction make it a true worker.…If your goal is to have a ring routine that gets laughs and makes an audience member the star, then this is a must-get.”
~ Joe Turner, Genii, November 2014

the one Report this review
Verified buyer Pro Privacy ON (login to see reviewer names) on April 26th, 2017
The thing I like about this routine is that is doesn't feel contrived. It can be so entertaining and it is its simplicity that makes this routine great.