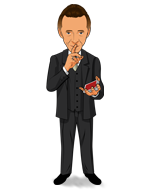 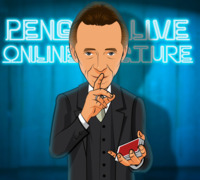 Today, when you order "Jan Forster LIVE", you'll instantly be emailed a Penguin Magic gift certificate. You can spend it on anything you like at Penguin, just like cash. Just complete your order as normal, and within seconds you'll get an email with your gift certificate.

"Jan is the epitome of the classic mentalist persona. His ACAAN is one of the best I've seen and his knowledge and skills are world class." - Bob Cassidy

"Just the lecture of Jan was worth the entire convention. There is probably no other German mentalist, who tunes and works out his routines with so much subtlety and deep thinking. Simply great!" - Erich Hammann-Boretti, Magic Circle Germany

Under Test Conditions (MemDeck Telepathy): So hands off, so impossible. 4 Spectators, 4 thoughts, you read them all. True mindreading would look like that!

Mental Poker: An impossible effect, three different methods, easy to perform - but you will fool also the most experienced guys...

Destinations: A unique combination of psychometry, graphology and telepathy with an extremely strong double punch at the end which looks like real mind reading. New in method, approach and very “hands off”!

The Mascot: Mentalists and magicians will love it. The probably best and smartest routine using the clock force. Entirely stand up, no table needed!

Jan Forster got a huge name in Germany, a big one throughout Europe and, latest since his appearances as one of the headliners and lecturer during the “Mindvention” 2011 in Las Vegas and the “Mind Summit” 2014 in Cologne, he is also well known in the rest of our “mental world”.

He is working as a full time pro since 1983, mainly doing theatres with his own full evening show, clubs, corporate shows, cruise ships and occasional TV appearances. Being a pupil of Henk Vermeyden and Joe Nex he started as a manipulator in magic. He won with his original act "Smoker's Dream" several 1st prizes, including the Grand Prix Prag 1981, the German Championship in 1984-86, the Tarocco D'Oro Bologna 1983, Merlin Vienna 1991 and some more.

Having been always interested in mentalism and mental magic he turned completely mental in 2000. His deep knowledge and hard school of magic was and is often of great help, but he had to forget also things he had learned in so many years. He did.

Being member of the Magic Circle (MZvD) and the Society of European Mentalists (GEM) he has published highly acclaimed lecture notes, DVDs and contributions to several books and many magazines. He has published 5 books in German, the sixth one is coming in 2016. A big book in English is in preparation, containing all (previously in German) published material plus some more and updates. Currently, it is translated and expected to be ready by mid of 2016.

Many call him “Germany’s most entertaining mentalist” as he easily holds his audience’s attention for two hours and longer during his full evening shows. Colleagues praise his dedication to perfectionism and his painstaking eye for subtleties and details. Although very busy he loves to meet, share and brainstorm with other mentalists. Besides that, he loves to read in his huge library.

Being fluent in 6 languages he is travelling world wide. He is married to Danielle. They have two young daughters (and a cat) and live in Germany when not travelling.

His mother thinks he is the best, his kids (still) believe he’s great... :)

If you've never been to a magic lecture, there's never been a better time. Sunday, September 4th, at 7:00pm, we're streaming Jan Forster LIVE in a spectacular 2-hour online lecture. Watch and learn things you won't find in any book or DVD.

Highest Recommendation...Outstanding Mentalism Lecture Report this review
Verified buyer Pro Privacy ON (login to see reviewer names) on September 5th, 2016
Jan Forster is the professional's professional. Working full time as a performer for 30 years, the last 15 or so as a mentalist.

The routines, methods and subtleties taught in this lecture are easily worth 10 times what I paid.

The impression pad he demonstrates and teaches how to construct is an approach I've not seen before. In particular, the layers of deception when getting the p**k are ingenious.

So much content and wonderful thinking in this lecture.

On par with the Ross Johnson lecture in terms of quality.

I have never seen a lecturer more well prepared or with more attention to detail. Very, very impressive.
5 of 5 magicians found this helpful.
Did this review help you? Do you want to respond to this review?

the best lecture Report this review
Pro Privacy ON (login to see reviewer names) on February 24th, 2017
I need to say only one thing: please, make the second part with this great man! Finally the real mentalism lecture you can watch and make a great perfomance. I want so badly to spend at least one more hour with Jan.
1 of 1 magicians found this helpful.
Did this review help you? Do you want to respond to this review?

3 hours is too short !!!! Report this review
Verified buyer Pro Privacy ON (login to see reviewer names) on September 5th, 2016
It's definetly the best lecture i watched on penguin. Jan Foster share with us very clever methods and great effects, and his way to perform is engaging. 3 hours with him are too short.
Thanks for this lecture.
1 of 1 magicians found this helpful.
Did this review help you? Do you want to respond to this review?

One of Penguin’s finest lectures! Report this review
Verified buyer Pro Privacy ON (login to see reviewer names) on September 5th, 2016
Watching Jan Forster perform at his Penguin lecture exceeded my expectations as I only new of him by his stellar reputation as a performer. His performing talent was only matched by his impeccable charm and stage presence.

Jan taught 6 routines from his working repertoire ( very few working Pro’s would feel confidant teaching just one ), but with the lecture over 3 hrs. long, with Jan teaching variations and the real gold : the performing nuances that turn them into show pieces!

Jan Forster lecture is a must have for any performer serious about their craft!

Chris
1 of 2 magicians found this helpful.
Did this review help you? Do you want to respond to this review?

If only one... Report this review
Verified buyer Pro Privacy ON (login to see reviewer names) on March 17th, 2021
To me personally there was just one trick that I am going to do and that is a stand up version of the classic clock trick ( with cards) very practical and plays big and is actually less confusing when done without a table as a stand up trick. Very good, hence ⭐️⭐️⭐️ The rest was not for me, but who knows it might be right for you...

Fantastic Report this review
Verified buyer Pro Privacy ON (login to see reviewer names) on January 29th, 2021
Mentalism at its best. This lecture is absolutely fantastic. The effects are well presented and explained in painstaking detail.
Did this review help you? Do you want to respond to this review?

What a beast Report this review
Verified buyer Pro Privacy ON (login to see reviewer names) on January 29th, 2020
Jan is awesome and fooled me live directly in my face.
His methods are simple, effective and straight.
In the lecture he explains the craft work behind and the technics he use for the effects out of the show.
Did this review help you? Do you want to respond to this review?

Jan forster live Report this review
Verified buyer Pro Privacy ON (login to see reviewer names) on September 29th, 2017
This is great real world mentalism.this you you will use.buy it now.errol
Did this review help you? Do you want to respond to this review?

A Masterpiece! Report this review
Verified buyer Pro Privacy ON (login to see reviewer names) on July 30th, 2017
I enjoyed the lecture immensly, and highly recommend it
Only deep thinking, attention to even the smallest details, and obvious testing of the respective effects probably over many years can lead to such amazing results as this lecture.

It was a great inspiration!
Did this review help you? Do you want to respond to this review?

Mentalism for the Professional Report this review
Verified buyer Pro Privacy ON (login to see reviewer names) on July 2nd, 2017
There's a few things you need to know about this lecture.

First of all it's not for beginners. While some of the tricks here have very simple methods (provided that you've done enough preparation) the difficulty comes from seeing how each element Jan presents blends into each other to create an impossible effect is where the real work is.

Secondly, this lecture is DENSE. You'll probably want to watch this lecture multiple times in order to catch every subtlety and detail.

This lecture comes with a full performance. This is great because you get to see the man in action and even learn a little from watching it.

There aren't a lot of tricks but everything here is gold and has a lot of work behind it. There's a lot of preparation behind everything but all of it is there to make each effect seem impossible.

This is perhaps one of the best mentalism lectures I've seen on Penguin and I HIGHLY recommend this one to anyone interested in mentalism. I know I've said before that this isn't a beginner lecture, but beginners will learn a LOT from this. This is mentalism for the professional.
Did this review help you? Do you want to respond to this review?
Load more reviews
Bestsellers