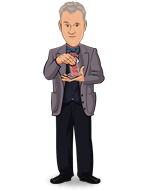 Today, when you order "Aunt Mary's Terrible Secret by David Williamson", you'll instantly be emailed a Penguin Magic gift certificate. You can spend it on anything you like at Penguin, just like cash. Just complete your order as normal, and within seconds you'll get an email with your gift certificate.

Every family has their secrets. The Williamson family has Aunt Mary. A respectable woman with a murky past, Aunt Mary has finally come clean. Revealed here for the first time as a professional card routine in three powerful acts, Aunt Mary's Terrible Secret is well within the reach of any performer. Two audience members are invited to play a simple color matching game for the chance to win fifty-two dollars. The cards are unprepared, the money is real and this incredible, easy-to-master routine builds to a devastating climax that will leave your audiences stunned. After Aunt Mary's Terrible Secret, you'll never look at little old ladies the same way again.

"Quite simply, this is a highly commercial routine. It combines money, gambling, audience participation, and uncanny control over the cards to produce a routine that audiences love and remember." -- Darwin Ortiz

"David has given the serious performer a truly masterful three-act professional performance piece that will leave his unwitting participants completely entertained and at a total loss as to any explanation." -- Roger Klause

Please note: This is a 44 page manuscript professionally produced by David Williamson and illustrated by Earle Oakes. It does not use gimmicked cards or gaffs of any kind. It is a complete and powerful gambling routine, that is insanely easy to do! Approximately 8" x 5" this book contains over 40 pages. Illustrated.

Amazing! Report this review
Pro Privacy ON (login to see reviewer names) on April 6th, 2010
I learned this trick from one of David Williamson's DVD and it is certainly a stunning trick. David Williamson is an amazing magician and I'm sure you'll agree once you learn this trick. This trick is based on mathematical principles but not like other math tricks which are easily figured out. After learning this trick I recalled thinking that this was probably one of the best pieces of magic I have ever seen. If you don't believe me, buy this and you will see for yourself.
Did this review help you? Do you want to respond to this review?

A great routine! Report this review
Pro Privacy ON (login to see reviewer names) on April 2nd, 2010
This is a full performance in one routine. You basically play a 3 phase gambling routine that's tied to the story of Aunt Mary. Is it vital that you repeat the story? Pretty much, yes. But it's not that hard to learn.

Keep in mind that this is a 25 page booklet and you have a lot to learn before you perform this. You won't be doing this effect 10 minutes after you get it. That being said, it IS something you can do with any deck of cards (after you set it up) and it's something you'll be remembered for.

I, for one, would have rather seen this as a DVD simply because of what's involved, but the book is easy to follow.
Did this review help you? Do you want to respond to this review?

audience pleaser Report this review
Pro Privacy ON (login to see reviewer names) on April 2nd, 2010
I had the pleasure of learning this from David Williamson at a magic convention. Definitely takes a lot of practice, but it's one hell of a crowd pleaser, especially as a demonstration of your skills as a magician. $25 is nothing for such a well crafted routine AND a great effect.
Did this review help you? Do you want to respond to this review?

Amazing Report this review
Pro Privacy ON (login to see reviewer names) on December 1st, 2006
Aunt Marys Terrible Secret is amazing. It has Davids usual flair and is a fantastic effect from a non set up deck. As said before this probably wont go into you close up act but as an encore act or a after show act, it's pure genius and you can make what ever you want from it with a wide range of patter ideas and different performances (you don't have to use marys patter) Get it and you'll be thanful
Did this review help you? Do you want to respond to this review?

Choose Your Audience Wisely Report this review
Verified buyer Pro Privacy ON (login to see reviewer names) on January 2nd, 2006
This is definitely a great method with a great trick attached to it. I performed it for a few poker players and they accused me of couting cards. I will say, however, that this is normally not a trick that would fit in a show except on certain occassions. If you do card magic, I'm sure you've had someone say while you're performing, "I wouldn't want to play cards with you," or "I wish you were on my team in a card game." That usually gets a genuine laugh from everyone except the magician whose faking a laugh at that line which he's heard 5 times previously that same night. Anyway, when they say that, now's the time for this trick to shine. Plus, if you're in someone else's house, you can borrow a deck of cards (just make sure that it's 52). Definitely recommended for someone that likes the "playing a game" presentation of card magic.
Did this review help you? Do you want to respond to this review?

Super cool Report this review
Verified buyer Pro Privacy ON (login to see reviewer names) on November 20th, 2003
Hey this trick is awesome! It's a classic beat effect. Beating all odds you win 52 dollars. This trick is great, and you don't even have to be the best at cards. There is only like 1 hard move, AND IT'S NOT EVEN THAT HARD! Enough said, just click add to cart. You won't be disappointed.
Did this review help you? Do you want to respond to this review?

I love the method Report this review
Pro Privacy ON (login to see reviewer names) on November 16th, 2003
There aren't many times when I like the method more than the trick. This is one of those cases. The trick is more suited for an after show effect. It will probably become one of my favorite effects to perform in impromptu situations with someone else's deck, but it's not something I will probably add to my close up show. It is interesting to understand the effect though and I'm glad I got it.
Did this review help you? Do you want to respond to this review?

Aunt Mary's Terrible Secret Report this review
Pro Privacy ON (login to see reviewer names) on December 29th, 2003
Mildly amusing but terribly overpriced. Not up to David Williamson's usual standards. The majority of the book is taken up by filler. A long drawn out story about the Williamson clan.
0 of 1 magicians found this helpful.
Did this review help you? Do you want to respond to this review?
Bestsellers