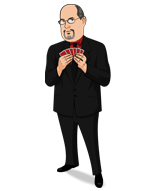 Today, when you order "Boomerang By David Devlin", you'll instantly be emailed a Penguin Magic gift certificate. You can spend it on anything you like at Penguin, just like cash. Just complete your order as normal, and within seconds you'll get an email with your gift certificate.

This is one of David's favorite effects. Not only does it fry laymen, but it also fools magicians as well. It can be performed at any point during your act. It does not have to be an opener or a closer, but it could be used as either. It is a very powerful effect because it seems very hands-off and is extremely visual. It is also easy to do!

Effect: Two red backed jokers are freely shown, and are set aside. A spectator selects a card from a blue backed deck, and signs it (the selection must be signed, or the effect is greatly diminished). In this example let's say that the card is the three of clubs. The selection is then replaced to the center of the deck but is still out jogged for about a third of its length. The red backed jokers are then picked up with your free hand, and held away from the deck. The selection is then pushed cleanly into the deck. Now, without coming anywhere near the deck, the jokers are waved, and instantly and visually the signed three of clubs appears in between them. The three cards are freely shown. There are two red backed jokers and one blue backed and signed three of clubs, and that is all.

You offer to repeat the effect. The spectator cuts the deck in half, and buries the three of clubs in the deck himself. Again, without coming anywhere near the deck (you never touch the deck during this phase), the jokers are waved, and instantly and visually the signed three of clubs appears in between the jokers!