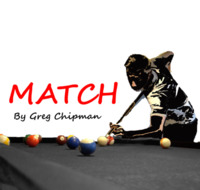 Today, when you order "MATCH by Greg Chipman", you'll instantly be emailed a Penguin Magic gift certificate. You can spend it on anything you like at Penguin, just like cash. Just complete your order as normal, and within seconds you'll get an email with your gift certificate.

The magician has two decks, one red the other blue. He places the blue deck aside explaining he will come back to that deck later. The other (red) deck is then opened and shuffled by the spectator, never touched by the magician at any point throughout the routine. Once shuffled and seen to be all different, they are then spread face down by the spectator all over the Snooker/pool table, covering as much of the table as possible. The white snooker ball is then used, with any starting point chosen by the spectator, hit anywhere on the table, thus randomly select a playing card. The card the white pool ball lands closest to is the one that will be used for the effect. The spectator can even have the choice to hit the ball again if they wish to select another card, it really is that free. All other surrounding cards are removed and the selected card is moved to the centre of the table, still face down by the spectator. You never touch the selected card. The other deck now comes into play. The deck is opened and spread, with one face down card seen. This is also placed face down onto the centre of the table, next to the other. One blue back and one red back card are now facing down on the table. Both are turned over by the spectator and are seen to match. The card randomly selected by the spectator with the white snooker ball matches the one and only face down card in the other deck.

Any card can be selected and its match will be revealed

Make your magic stand out

Simple,easy Report this review
Verified buyer Pro Privacy ON (login to see reviewer names) on February 25th, 2018
Nice one.very clever
Did this review help you? Do you want to respond to this review?
Bestsellers