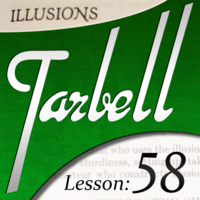 Today, when you order "Tarbell 58: Illusions", you'll instantly be emailed a Penguin Magic gift certificate. You can spend it on anything you like at Penguin, just like cash. Just complete your order as normal, and within seconds you'll get an email with your gift certificate.

The greatest stage illusion lessons available at any price.

Since its introduction, The Girl From the Light (now known as The Shadowbox) has remained a popular effect with illusionists the world over.

The addition of light and shadows creates drama and mystery, captivating your audience in ways that transcend the typical box trick.

In this lesson, you'll see three presentations that take the basic appearance and push it even further to really set you apart from the pack.

First, the design of the box has been re-imagined to give it style, stage presence, and symbolism while justifying the modern addition of the corner fins.

Plus, the egg shape allows the subject to appear standing up and lends itself well to a comedy-themed giant chicken production.

But the brand new design is also incredibly versatile as you'll see in the science fiction inspired solo-appearance for making your grand entrance.

Of course, as always, you'll learn how the illusion has been constructed to be easily taken apart and put back together without any tools.

And in the final variation, you'll be introduced to a method incorporating lights on the outside of the box and a wonderfully deceptive optical principle inside.

As you can see, we're getting into some slick, professional techniques and detailed decorations transforming that "plain white box" into something spectacular.

Illusions Report this review
Verified buyer Pro Privacy ON (login to see reviewer names) on October 1st, 2016
Wow! I did not intend to even watch this as I don't do big illusions. Dan's smooth, clear teaching method pulled me in and I watched the whole thing. Just learning about Rosco Loose Pin Hinges made it worthwhile. I can see the use of those in building small illusions, tables, and backdrops. Dan is a natural born teacher with a great attention to detail. The editing and camera work was excellent as well.
3 of 3 magicians found this helpful.
Did this review help you? Do you want to respond to this review?

Builder's Square and Magic Report this review
Verified buyer Pro Privacy ON (login to see reviewer names) on September 15th, 2016
Excellent routines and very precise and easy to understand building instructions. If you are a decent carpenter great, if not it is still worth understanding the workings of these stage illusions.
3 of 3 magicians found this helpful.
Did this review help you? Do you want to respond to this review?

Tarbell 58 Report this review
Verified buyer Pro Privacy ON (login to see reviewer names) on September 18th, 2016
I love it. I love watching the performance. The explanation was top notch. I am sure no mater if you are a beginner or advance you will pick something up. Keep up the GREAT work Mr. Harlan.
0 of 1 magicians found this helpful.
Did this review help you? Do you want to respond to this review?
Bestsellers