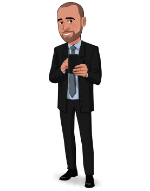 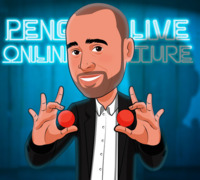 Today, when you order "Carl Andrews LIVE", you'll instantly be emailed a Penguin Magic gift certificate. You can spend it on anything you like at Penguin, just like cash. Just complete your order as normal, and within seconds you'll get an email with your gift certificate.

If you want to start working in magic, get this lecture and study it, because Carl Andrews is as good as it gets! SUPPORT LIVE MAGIC. DOWNLOAD THE FULL LECTURE TODAY.

"If a restaurant had a thousand tables and there where a thousand magicians performing, one for each table, all the people would want to be at Carl's table...including the other 999 magicians. Carl is that good."  - Joe Monti

“The routines are high-impact workers, the best compilation of clearly workable ideas that I’ve ever encountered!” - Paul W. Cummins

"The advice is excellent, and is the kind of information that can only be obtained through experience. In fact, Carl offers one suggestion that was new to me, and which I have immediately incorporated." - Michael Close

"Here's fine advice from a working pro who really knows what he's talking about."  - Mac King

"It's a rare treat to learn from one of the true masters who makes his living doing this stuff for real people. Carl's as good as it gets." - Joe Givan

"A must for those wanting to learn practical material"  - John Carney

"Swaying palms, hot white sand, sun-kissed shores . . . This is where Carl Andrews makes his very good living! Now he's giving up his marketing methods for us mere mortal mainlanders. Run, do not walk, and take his advice! Who knows, maybe you too can get your own island one day." - Gregory Wilson

"I have seen this material performed in the "real world" for amazed audiences. It is my kind of magic: practical, "working pro's" material that is within the reach of every performer. This is material used regularly to "wow" both the Hollywood celebrity crowd and the high-end Hawaiian tourist trade." - Dan Garrett

"I like them both! It's always a pleasure to see stuff that's not pipe dreams and closet magic. This is clearly material and advice from a performing magician who knows his job!"  - Jarle Leirpoll

"Very good. One can really see you are a worker, the practicality is obvious."  - Tommy Wonder

"Anything Carl puts out should grab the attention of anyone who hopes to be a successful magician." - Scott Wells

"No pipe dreams here. Carl gives you the real work on performing for real people in the real world. That's what everyone is looking for, and that's what Carl delivers" - Danny Archer

Two Cup & Ball Routine - The title says it all

He will also talk about how to get table hopping gigs or even creating your own venues, How to work the restaurant once you have the gig, How to approach tables or groups of people at a walk around gig.
Carl will also answer questions about cruise ship work (over 15 years on ships), show his Pocket/Pocket, the pocket organizer for strolling magicians, and demo his Show Cues App, the best way to control your show music.

Carl Andrews is a master of sleight of hand and a master showman. He is the consummate
corporate entertainer whose engaging and interactive performance style is clean, fresh and FUNNY!

Carl specializes in what he calls Interactive Mental Comedy. Carl’s mental comedy show is good clean fun for audiences of any size. Perfect for conventions, banquets, colleges, cruises and special events. Several audience members are brought up on stage adding to the excitement. The act blends suggestion, perception, deception and misdirection with lots of comedy for a truly entertaining show.

He has performed all over the world including throughout the United States, Canada, Mexico, England, Germany, Austria, France, Italy, Belgium, Switzerland, Holland, Denmark, Sweden and Norway. He has appeared in Las Vegas, Atlantic City and the prestigious Magic Castle in Hollywood as well as on Luxury Cruise Ships around the world. His award winning act has taken him to over 60 countries on 5 continents.

Carl Andrews Lecture Report this review
Verified buyer Pro Privacy ON (login to see reviewer names) on October 30th, 2016
From the beginning to end, nothing but top notch advice from one of the best close up magicians around. Everything that was shown was a true worker for any one who is willing to put the time in. Loved the whole thing! Highly recommended lecture.
4 of 4 magicians found this helpful.
Did this review help you? Do you want to respond to this review?

Best lecture on restaurant magic Report this review
Verified buyer Pro Privacy ON (login to see reviewer names) on December 8th, 2016
I work as a professional restaurant worker so I am looking for instant reset tricks where you can add your own personality to it. You can really tell that Mr. Andrews is a worker. His routines are polished and the presentation is very tight. What I also like about his tricks is that he doesn't use any gimmicks or complicated moves. He prioritises entertainment over moves. Real workers will apreaciate that. Also, his routines don't have any angle issues. They reset instantly and are very workable.
3 of those tricks will go straight into my repertoire. The impromptu anniversary waltz, the Scotch and Soda and the Frog trick. Those were my favorite ones.
On a side note, I wished he went more in depth about the reset of some of his routines, e.g. the frog routine. I will eventually work that out myself but I wished he had included that. For the serious walk around performer it is a must!
3 of 3 magicians found this helpful.
Did this review help you? Do you want to respond to this review?

BEST LECTURE I HAVE SEEN IN A LONG TIME Report this review
Verified buyer Pro Privacy ON (login to see reviewer names) on November 18th, 2016
WOW from the moment Carl starts to the moment he stops you will be captivated by his style of magic and his grace. Carl’s magic is top notch AND all the effects he shows are real world working material that you can go out and perform to your audiences, you can see that Carl has perfected every effect and trimmed all the fat off making every effect efficient and to the point. I HIGLY RECOMEND THIS LECTURE it is without doubt one of the best lectures I have seen in a very long time. Get it or you will be missing out. Thank you for sharing Carl, and thank you Penguin.
2 of 3 magicians found this helpful.
Did this review help you? Do you want to respond to this review?

enjoyed it Report this review
Verified buyer Pro Privacy ON (login to see reviewer names) on November 7th, 2016
he has a few quickie routines that wil establish as a pro with the audiences attention span in mind. highly recommended.
2 of 3 magicians found this helpful.
Did this review help you? Do you want to respond to this review?

My most valued lecture. Report this review
Verified buyer Pro Privacy ON (login to see reviewer names) on December 16th, 2020
WHO ever is starting out in magic, this is the best first lecture to absorb. 1st it has the most powerful reputation making presentations you can do. 2. It teaches how to make BIG bucks in magic starting out with restaurants, then private parties and then cruise ships. 3. FINALLY it gives you a big picture of how far you can go with magic without having to create an illusion stage show but doing the tricks on the video. Then the end of the video war stories is as powerful as the fabulous trick you learn at the beginnings. I wish I saw this 50 years ago.
1 of 1 magicians found this helpful.
Did this review help you? Do you want to respond to this review?

Awesomeness Report this review
Verified buyer Pro Privacy ON (login to see reviewer names) on November 10th, 2016
If you tablehop, Busk, do Corporate, anything where you use a close up style, this is all you need. Not only are the effects easy and killers but the advise is spot on and easy to follow. I am scrapping my old set and changing it to redo what I had been doing but his way.
1 of 2 magicians found this helpful.
Did this review help you? Do you want to respond to this review?

Best worker lecture I have seen...... Report this review
Verified buyer Pro Privacy ON (login to see reviewer names) on November 7th, 2016
Every single effect in this lecture is good/great. I already had the " ain't no moe" which I use( I only use the sponge ball routine not the cups and balls) at every one of my shows and it kills. I learned a ton, especially the 3 sets of three effect for walk around. This will help me a ton in stream lining my walk around shows. Thanks Carl!!!!!!
1 of 2 magicians found this helpful.
Did this review help you? Do you want to respond to this review?

Great lecture Report this review
Verified buyer Pro Privacy ON (login to see reviewer names) on November 6th, 2016
This is an enjoyable lecture with lots of practical effects and advice.
1 of 2 magicians found this helpful.
Did this review help you? Do you want to respond to this review?

Excellent advice and instruction Report this review
Verified buyer Pro Privacy ON (login to see reviewer names) on November 5th, 2016
Very well thought out lecture for an aspiring table hopper or walk around magician
1 of 2 magicians found this helpful.
Did this review help you? Do you want to respond to this review?

Smooth operator Report this review
Verified buyer Pro Privacy ON (login to see reviewer names) on November 2nd, 2016
Wow what a treat.Carl knows how to treat people and make them feel relaxed and entertained.Best money one can spend if you need 30 years real world experience.The effects are strong but his smooth style is where the moneys at! Thanks Carl
1 of 2 magicians found this helpful.
Did this review help you? Do you want to respond to this review?
Load more reviews
Bestsellers